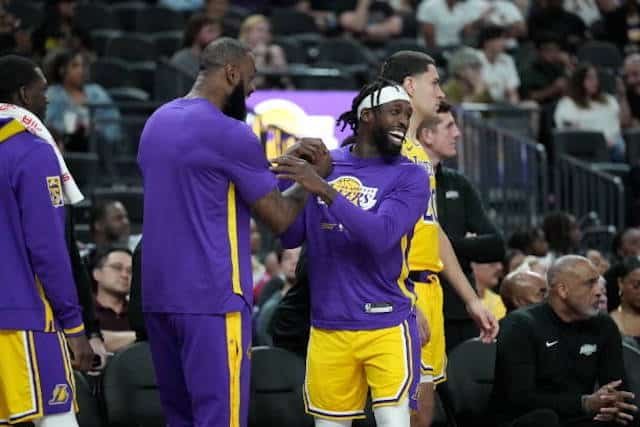 After winning three games in a row, the Los Angeles Lakers were unable to make it four. They lost their last game to the Phoenix Suns despite another amazing performance by Anthony Davis. But another blow the Lakers suffered was the ejection of their starting point guard, Patrick Beverley. And fans seem to have some mixed reactions to it.

Phoenix had a 10-point lead with four minutes left in the fourth quarter when Austin Reaves got fouled by Devin Booker and hit the floor holding his face. That is when Deandre Ayton decided to stand over a collapsed Austin Reaves.

Patrick Beverley had his teammates’ back

And Patrick Beverley took offense to that. He sprinted from the back and shoved Ayton to the floor, forcing the officials to intervene. Both teams’ players formed a cluster around the two as they had to be separated.

and now, according to reports, Patrick Beverley has been suspended by the NBA for the next three games. Fans had mixed reactions to the decision. one fan said, “Seems a little harsh” whereas another fan tweeted, “3 games!!! Wow league is so soft.”

I’m a Suns fan and I love Beverley. He is what is missing in today’s woke NBA . Tough, trash talk and a genuine dislike for the other team makes for a much better product.

The Los Angeles Lakers have already been playing without their star, LeBron James. However, it seemingly has not affected them on the floor so far. In fact, since the injury to James, the Lakers have arguably been playing better.

The team is being led by Anthony Davis in James’ absence, and he has been putting on a show these last few games. Even in their loss against Phoenix, Davis dropped 37 points, 21 rebounds, 2 assists, 5 steals, and 5 blocks for the game.

How will the Lakers look after the return of LeBron James?

Hear they trying to give me the book 🤦🏾‍♂️

Westbrook and Davis may go on to form a deadly duo, at least for a few games. As for LeBron James, there still hasn’t been any official statement given by the team as to when fans can expect the four-time NBA champion to return to the court.

Watch This Story – Stepping over Draymond Green, clawing at Patrick Beverley, and other moments when LeBron James lost his cool

What did you make of the NBA’s decision to ban Patrick Beverley for three games? Let us know your thoughts in the comments below.