NFL star Tom Brady and Barack Obama headline the messages of support for the USA at the World Cup, while NBA champion Draymond Green urges the national team ‘to bring home the gold’

By Isabel Baldwin For Dailymail.Com

NFL superstar Tom Brady headlined the good luck message to the US men’s national team ahead of its first game at the World Cup Monday.

The US kickstarted its campaign against Wales at 2pm EST as it made its return to soccer’s global stage after missing out on the 2018 tournament.

As Gregg Berhalter’s youthful team secured a point with a 1-1 tie against Gareth Bale and Co. in Group B messages flooded in on social media from fellow athletes and celebrities, urging the US on.

Tampa Bay Buccaneers quarterback Brady led the way as he posted to his Instagram story a photo of his USMNT winter sweater with the American crest on the front and his Buccaneers No. 12 and surname on the back.

In the post, he wrote: ‘Ready to go. Shoutout to my @foxsports crew.’ He also tagged the national team’s account.

The 44th President of the United States Barack Obama tweeted his support of the national team as he revealed he would be rooting for it. 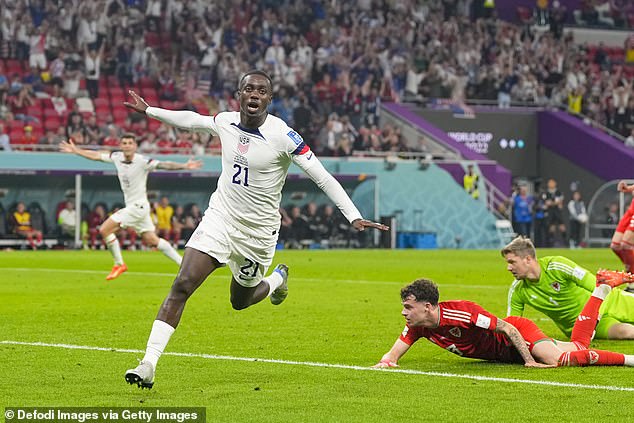 He posted: ‘Best of luck to @USMNT at the World Cup! Michelle and I are incredibly proud of what you’ve accomplished so far, and we’ll be rooting for you all the way.’

NBA defending champion Golden State Warriors’ Draymond Green also shared a message of his own on the team’s Twitter account.

Golden State posted a video of Green, in which he said: ‘As a fellow United States of America Olympic member, I want to wish the USA World Team good luck in Qatar. We know you’ll bring the gold home. We believe it.’

The US women’s national team also shared a video led by Alex Morgan, who recently earned her 200th international cap.

She said: ‘I just want to wish our men good luck at the World Cup. It’s such a big tournament on such a huge stage. We’re all watching and can’t wait to see all the success you have there.’

The video showed other members of the USWNT sharing their own encouraging messages, including a particularly enthusiastic one from American legend Megan Rapinoe.

Meanwhile, Paul Arriola, who had previously taken to social media to express his devastation at being left out of the roster, put aside his heartbreak to cheer on the players who had made it to Qatar.

A host of American sports teams from the likes of the Boston Celtics, Los Angeles Angels and the New York Jets also shared messages of encouragement, promoting the sentiment of ‘One Team. One Nation.’

North Carolina senator Thom Tillis backed the national team as he posted: ‘Let’s go #TeamUSA! Wishing the best of luck to the @USMNT in their @FIFAWorldCup match.’

Paul Arriola, who was left of the roster, put his heartbreak to one side to support the team