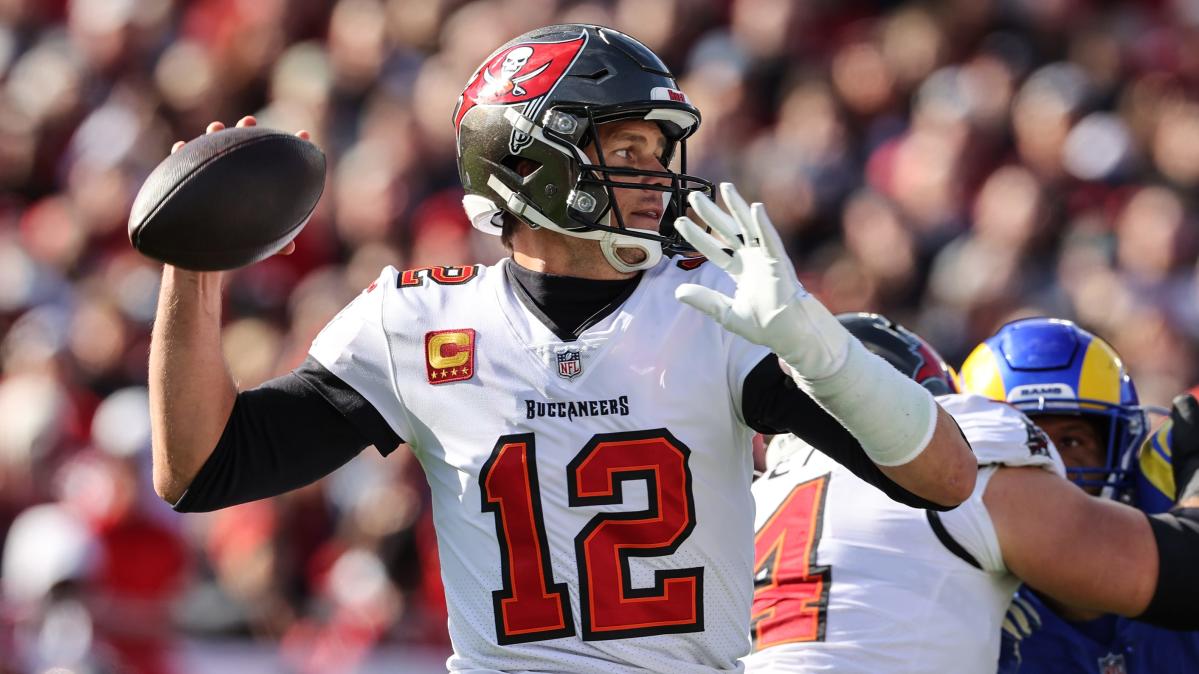 FRANK SCHWAB: Gronk we know is a red zone monster, has been his entire career. Now, who gets those touchdowns? I think Fournette is at the top of that list. Mike Evans is going to eat, he always does.

FRANK SCHWAB: I liked the Russell Gage call out. I mean somebody’s got to catch passes. I think one offshoot of this, and it’s something our friend Scott Pianowski actually emailed me about overnight, we have to kind of downgrade Brady a little bit, don’t we? Like, you don’t want to be one year too late on him. And my goodness, have I lost a lot of money fading Tom Brady, as I’m like, you can’t do this at 41.

FRANK SCHWAB: You can’t do this at 42. Can’t– but finally we get to the point where it’s like he just lost a key part of his offense. Godwin, I’m fading him, because he’s coming off this ACL late in the season. Do we finally like say I’m going to fade Tom Brady in drafts? I don’t know.

LIZ LOZA: He lost a couple O-linemen, right? Cap is not there anymore. Ali Marpet, like he’s not there. So I do think, you know, we’ve seen Tom Brady. We’ve become used to the miracles that have occurred via the hands and the presence of Tom Brady. But even miracles run dry eventually, you know. So I think you’re right. I’m just getting– he also signed this giant deal, right? The broadcasting deal? So there’s something else on the horizon. It feels very different.

FRANK SCHWAB: And something, I’ve always kind of– this is a funny line. But I think it is true, that if you’re an NFL player, once you start thinking about retiring, you’ve already retired. Like I mean, and I think that, I don’t know, just a competitive monster–

FRANK SCHWAB: A competitive monster like Brady retires. And then he kind of has second thoughts. He comes back. And it’s just– it was a weird off-season. I personally, look, I mean, Brady’s going in a spot in the draft where I could just say, you know what, I’m going to take Russell Wilson instead, or I mean, guys around that area. So I think I’m going to probably not have any shares of Brady at all.

And, you know, I don’t learn my lesson. And it’s just the way it goes, Brady will probably throw for 40 touchdowns again. But I think this is the year that we could see a slide.

LIZ LOZA: Well, it’s also, it’s just what you mentioned, the ultra-competitiveness. Like we know he is that ego, that drive, that Michael Jordan-esque intangible competitiveness is so present in him. And I don’t think that ever goes away, right? So it’s that at this point that we’re betting on.

FRANK SCHWAB: Yeah, yeah, and I don’t know. I think it might, just the whole retirement thing, maybe it slips a little bit. Maybe, just like, you know what, I’ve got seven rings. What am I really playing for here? What does Tom Brady have left to prove? If you think he’s the greatest quarterback of all time, you already do. It ain’t frigging changing that. You’re either–

FRANK SCHWAB: Yeah, it always has.

LIZ LOZA: So I think that that– and also, I’m wondering too if the retirement, and the un-retirement, you know, Charles talked about this on You Have to Win the Game. I’m not sure if you were the guest that week. But the situation in Miami might have created a couple of circumstances that forced him to double back on something he did.

So it is a different year. And I agree with you. I probably won’t have any shares of him, though in the Scott Fish Bowl, just looking at that scoring system, that’s a little interesting in a two-QB league.

FRANK SCHWAB: It will depend.

LIZ LOZA: Especially if you do that.

FRANK SCHWAB: I mean there are situations where I wouldn’t pass. But it won’t be proactive, let’s put it that way.