Bears linebacker Roquan Smith continues to “hold-in” as he seeks a new contract or a trade from Chicago.

The 25-year-old Smith has attended every spring workout, voluntary veteran minicamp, OTAs and mandatory veteran minicamp in June. He’s even been present throughout the training camp, but has yet to participate in practice.

“Hold-ins” like Smith’s have made headlines this preseason as several NFL stars have employed the tactic in an effort to land new deals. Los Angeles Chargers DB Derwin James is currently “holding-in” while Steelers receiver Diontae Johnson declined to participate until he and Pittsburgh agreed to a three-year extension. James’ situation emulates 49ers receiver Deebo Samuel and Seahawks receiver DK Metcalf, who both held-in before getting their contracts.

But what is a “hold-in” and why are players seemingly employing this tactic more than the traditional holdout fans have seen through the years?

The Athletic‘s staff explains below:

What is a hold-in?

A hold-in, unlike a holdout, is when a player who is unhappy with his current contract still continues to attend team practices but instead of working with the team, he works off to the side, either by himself or with players rehabbing from injury .

How do Smith and James’ contracts compare to their peers?

It’s hard to blame Smith or James for their stance given they’ve been two of the best defenders in the league at their respective positions since being drafted.

James currently ranks 30Th among safety contracts in the league, maxing out at $12.4 million. Eight safeties hold contracts maxing out north of $50 million:

You could argue Smith belongs among the top three linebacker salaries, while James should fit somewhere among those eight safeties.

How have the Bears handled the Smith situation?

The Bears’ situation with Smith has created a perfect storm.

It’s not as simple as what’s going on in Los Angeles with James or in Pittsburgh last year with TJ Watt. It’s a first-time general manager in Ryan Poles who has to be aware of the precedent he’ll set with this contract. Additionally, Smith has decided to represent himself, making negotiations and communication very challenging.

Then everything came to a head when Smith put out a trade demand through NFL Media last week, and harshly criticized the team for doing so. Poles came out that day to explain that while he wants to re-sign Smith, he has to do what’s best for the Bears. Things took another turn when it came out Monday that Saint Omni had been reaching out to other teams to gauge trade interest, something that is not allowed. 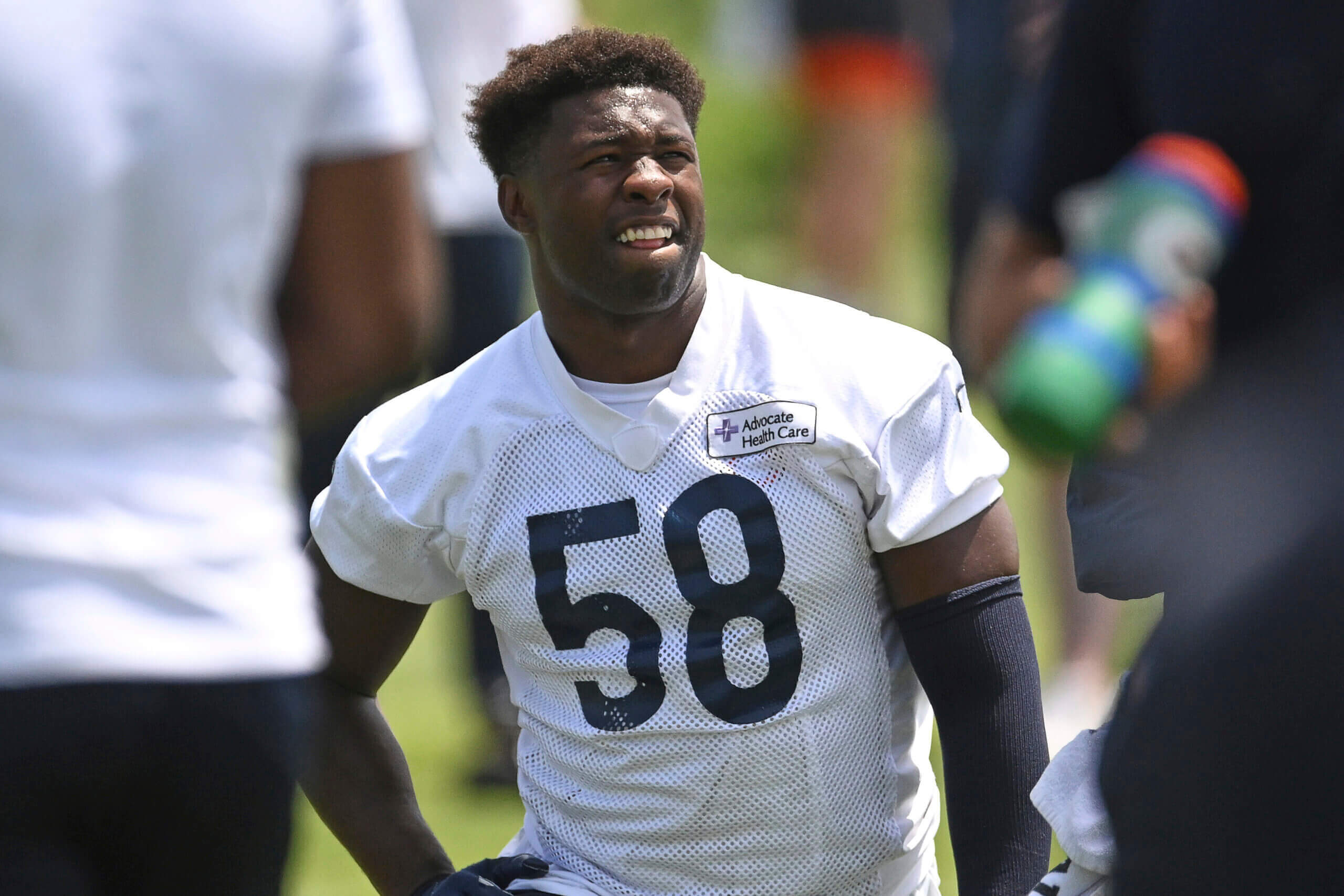 The Bears put Smith on the physically-unable-to-perform list to start camp. The day after his trade demand, they activated him, but will not confirm whether or not he has been fined. Smith has been at almost every practice, working out to the side with the injured players and along the sideline during team drills. He was at the preseason opener. Bears coach Matt Eberflus said Tuesday that Smith is engaged, and he will travel with the team to Seattle.

How have the Chargers handled their negotiations with James?

Publicly, the Chargers have been very supportive of James during his hold-in.

Chargers coach Brandon Staley has repeatedly stated the importance of getting these negotiations right for James, and he has often praised James for his leadership and patience despite missing the first 14 practices of training camp. James has been with the team every day. He is participating in meetings and working out with his teammates at the facility. He has been on the field for walkthroughs with the starting defense before every practice, and he has been going through agility drills with the Chargers’ sports performance staff during practice.

“It’d be one thing if he wasn’t here,” Staley said Tuesday. “But we see him every day.”

There is no apparent tension between James and the team. Between the team and James’ agent, David Mulugheta? That is a slightly different story.

How will this be resolved with the Bears and Smith?

Despite the acrimony that has been created, it is still hard to see the Bears not re-signing Smith. They need him for their defense and he can be a foundational piece of what Poles and Eberflus want to build. And this is probably Smith’s best spot to receive a lucrative contract extension. But it might take all the way until Week 1 to mend things and get a deal done.

How will this be resolved with the Chargers and James?

A deal has to be done before the start of the season. James is too important to the Chargers’ defense. The organization cannot afford for James to miss even one game, considering how much pressure there is to win in 2022.

Ownership spent a lot of money in the offseason to overhaul the defensive roster, including the trade for Khalil Mack, when the Chargers converted some of the edge rusher’s base salary into an up-front signing bonus. To be that aggressive in the offseason, only for the team’s best defensive player to miss time over a contract dispute? That just doesn’t match up. One side of going to have to budge. And it feels like James has more leverage in this situation.