Jeff Hardy was arrested on Monday in Volusia County, FL for “driving under the influence” as well as other violations. Hardy had reportedly spent the previous night at the Orlando, FL Dave & Buster’s, where Hardy performed an acoustic set, as well as held photo opportunities for fans, and finally hit up the SlamDown VII convention with various wrestling legends. All of the events were promoted through Glamor Under The Stars.

It appears to have been a heartwarming night for The Hardys. Matt even posted a photo of the brothers reuniting with former foe and longtime friend, D-Von Dudley. 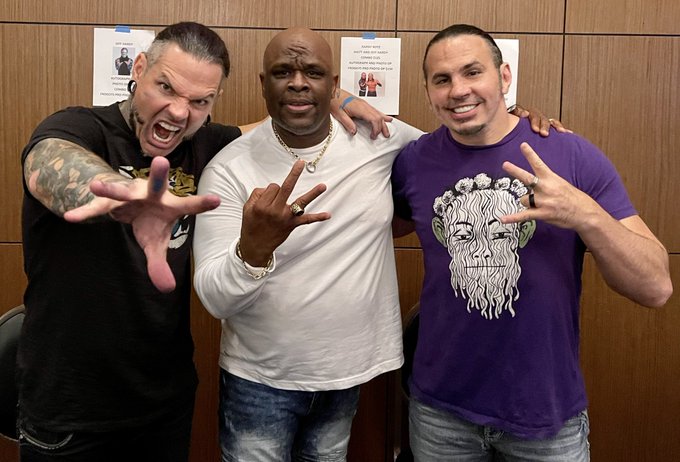 Jeff looked happy and energetic as he posed with fans during the convention.

Hardy was arrested the next day and charged with DUI, as well as two license violations. Hardy remains in custody after the arrest. Hardy was released from WWE amidst reports of erratic behavior, which culminated in him being sent home from a live event. Hardy has been on a near-full-time schedule since his WWE release, playing concerts, and doing a tour of meet & greets and conventions alongside his brother, all while on the road and wrestling in high-impact matches for AEW.

Hardy was recently pulled from a match after Double or Nothing, where he was noticeably sluggish, and seemingly still banged up from a match with Darby Allin the previous week, leaving questions about his current condition. After some recuperation, it was announced that Hardy was going to compete alongside his brother in a ladder match for the AEW Tag Team Championships on this coming Wednesday’s edition of “AEW Dynamite.”

Hardy was charged with “a 3rd DUI within 10 years” which carries a penalty of “up to five (5) years in prison and a $ 5,000 fine,” and is still in custody. He is scheduled for a hearing on Tuesday. There is no current word on the scheduled ladder match.

Have a news tip or correction? Send it to [email protected]