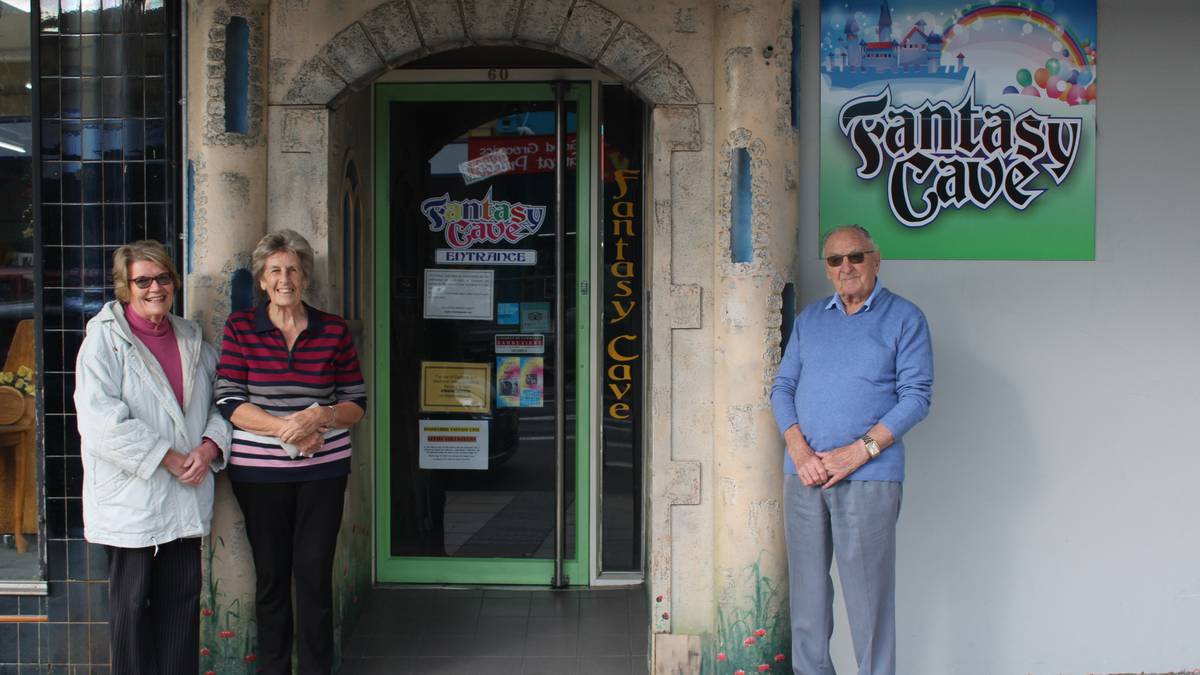 Three stalwarts and pioneers of the Dannevirke Fantasy Cave: Liz Edwards with Sylvia and Malcolm Peffers at the entrance to the cave’s former home on Dannevirke’s High Street.

Those working tirelessly behind the scenes to get the new building for the Fantasy Cave under way are hopeful it will be up and running by December, 2024.

Dannevirke Fantasy Cave Charitable Trust Inc. board president Grant Hurrell said he’d been asked by a number of people about the old building standing at the cave’s future location on Barraud Street.

“We haven’t pulled the building down because of our legal obligations, but it’s going to be pulled down and a new building constructed once we’ve got the money to replace the shell,” he said.

Dannevirke’s Fantasy Cave has long been a popular attraction to the town.

It started out as a Santa’s Grotto in December 1989, but eventually expanded to include fairy-tales and well-known stories, using four floors of the building in High Street.

For many of those nearly 33 years, the cave would be open year-round, attracting visitors from not just New Zealand, but all around the world.

Board treasurer Malcolm Peffers said it was estimated that the cave had brought about $20 million to Dannevirke at that time, in terms of spending in the district’s businesses.

In early 2020, the decision was made to have a purpose-built cave constructed to meet fire and health and safety regulations and which would also be accessible to everyone, whatever their physical ability.

But while the trust had purchased the building freehold, it had taken time to work through administrative red tape and process various government and local body issues, some of which were caused by Covid.

A local company had been engaged to demolish the existing building in Barraud Street.

Hurrell said the tender to erect the new building had been awarded to local firm Morris & Bailey.

“We have tried to use local companies as much as possible to complete work on the new cave,” he said.

While some companies had been “extraordinarily generous” in their costs, the construction would still cost a lot of money, board member Liz Edwards said.

The trust wanted to assure everyone with an interest in the cave that progress was being made.

“A lot of things have happened in the last two-and-a-half years that people can’t see,” Edwards said.

This year, the cave will be having a pop-up in the Fountain Theater – the second one since it went into recess.

The pop-up will be open just after the Christmas Parade on December 3, and then from December 5 to December 24.

Hurrell said many local businesses and organizations had sponsored the pop-up which the board was very grateful for, as they were with the support for the new cave.

He said it was felt the town was backing them because the Fantasy Cave was such a well-known feature to Dannevirke, and so they wanted to support it.