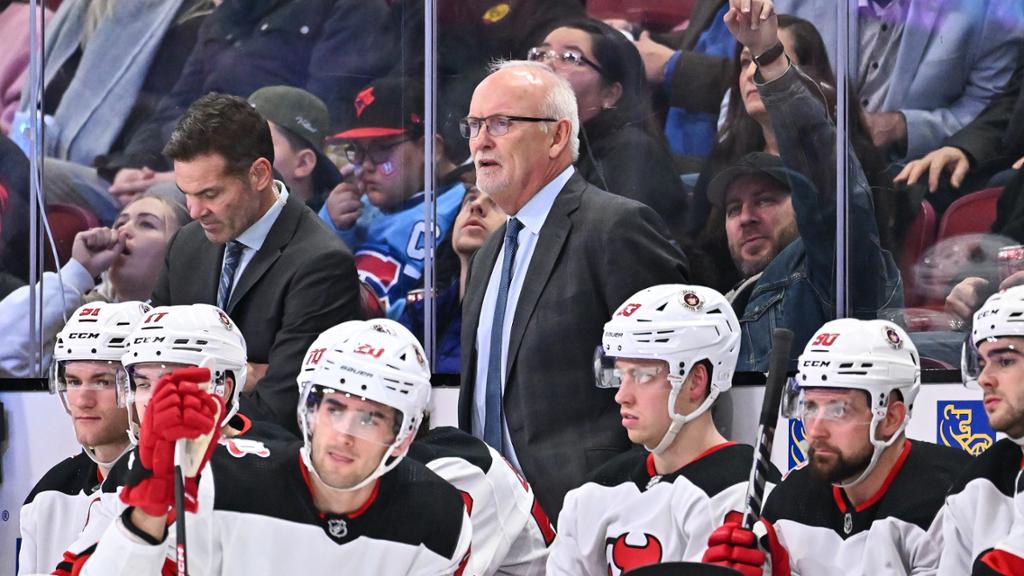 To mark the one-quarter point of the season, NHL.com is running its second installment of the Trophy Tracker series this week. Today, we look at the race for the Jack Adams Award, given annually to the top coach in the NHL as selected in a vote by the NHL Broadcasters’ Association.

Lindy Ruff won the Jack Adams Award, voted as the top coach in the NHL with the Buffalo Sabers in 2005-06, and could win it again this season with the New Jersey Devils.

A panel of 14 NHL.com writers chose Ruff as the favorite a quarter of the way through the regular season. Ruff’s 61 points (seven first-place votes) led the voting, one point ahead of Jim Montgomery of the Boston Bruins with 60 points (six first-place votes). Bruce Cassidy of the Vegas Golden Knights was third with 44 points (one first-place vote).

When the Devils defeated the Edmonton Oilers 5-2 on Monday, it was their 13th straight win, tying the longest streak in their history (Feb. 26-March 23, 2001). The Devils (16-3-0) have surged to the top of the Metropolitan Division, where they have an eight-point lead over the second-place Carolina Hurricanes.

It’s a great start for the Devils, who have qualified for the Stanley Cup Playoffs once in the past 10 seasons (2017-18).

Forward Jesper Bratt said Ruff, who was hired July 9, 2020, has been “growing us a lot over so many years.”

“I think the last two years before this, we were really young, and we weren’t as experienced as we are now and I’ve said it before, I think the younger core guys in our group have really been taking a big step and we added a lot of good pieces who have been making a big difference for us,” Bratt said. “So obviously it feels really good. He’s been a big part of the whole team and setting the mindset for the whole group so we’re happy for him, but also excited to keep this going.”

Ruff is fifth all-time in wins and first among active coaches with a record of 798-634-141 and 78 ties in 1,651 games with the Buffalo Sabres, Dallas Stars and Devils.

“Lindy Ruff has coached numerous games in the best League in the world for a reason with multiple different organizations,” Oilers coach Jay Woodcroft said. “He’s had good stints in Buffalo, Dallas and certainly now here. I think in the fraternity of NHL coaches, he’s widely respected and certainly someone I look up to from afar.”

The Devils have been led by their young forwards including Bratt, who leads them with 24 points (eight goals, 16 assists) in 20 games, Nico Hischierwho’s second with 22 points (nine goals, 13 assists) and Jack Hughesthird with 21 points (seven goals, 14 assists).

Ruff has been great at helping develop the Devils players and has had an effect on his staff as well.

“He has had a tremendous amount of success over his career and I kind of came in with open eyes, trying to learn from him and how he does his business. How he treats people and how he approaches day-to-day,” associate coach Andrew Brunette said. Brunette, who coached the Florida Panthers for most of last season, was not retailed and joined the Devils staff on July 15.

“We really haven’t had too many downs, but just the way that he handles the different pressures and different people,” he said. “I’ve really enjoyed being around him, learning, and I think we’re collaborating a little bit together. I think our whole staff is learning about each other and how we do business, and it’s been good so far.”