Scoring has been up considerably in the National Hockey League over the past five regular seasons. Last season saw another sharp move to the upside, with teams scoring an average of 3.14 goals per game – the highest number since 1993-94.

For a few years, much of the hockey public was reluctant to acknowledge the realities that the scoring environment had changed in the league. We’ve seen scoring surges in years past – sometimes a fleeting burst of offensive output in the early months of the regular season that fades late, other times juiced by an increase in penalty rates and corresponding power-play opportunities. In most cases, we were fooled. Games would get defensive in a hurry, with grinding hockey and dominating goaltenders defining the outcome.

But this run has been different. Of critical importance, the scoring outburst has sustained itself, unlike in times past. What do we attribute it to? Probably several factors. Goaltending equipment size reductions, an influx of top-end skill across lineups, the deepening of rosters and near elimination of grinders and enforcer-type skaters further down the lineup, and strategic and tactical changes coaches have made in a data-rich environment have all probably contributed.

Consider the trend in scoring behavior over the past 15 years: 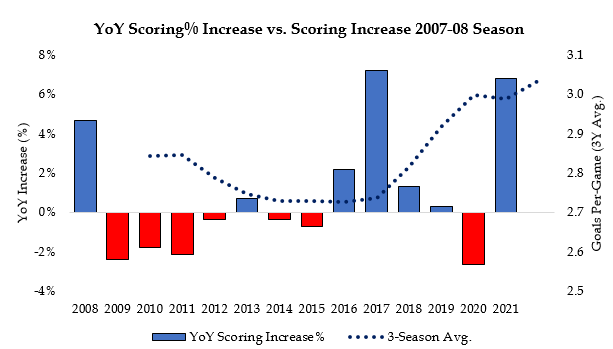 We can reasonably assume that scoring rates heading into this season will remain sustainably higher. That raises an interesting question: How many players will cross the coveted 50-goal mark? It’s an accomplishment four players (Toronto’s Austin MatthewsEdmonton’s Leon DraisaitlNew York’s Chris Kreiderand Washington’s Alexander Ovechkin) realized a season ago.

Crossing the 50-goal threshold is an accomplishment in any scoring environment, but the reality is today’s game has given the league’s best attackers an outside opportunity – as long as they play on a capable team and can stay reasonably healthy.

If we look at the past 15 seasons, we can see just how rare it is to score 50 goals in a single season: 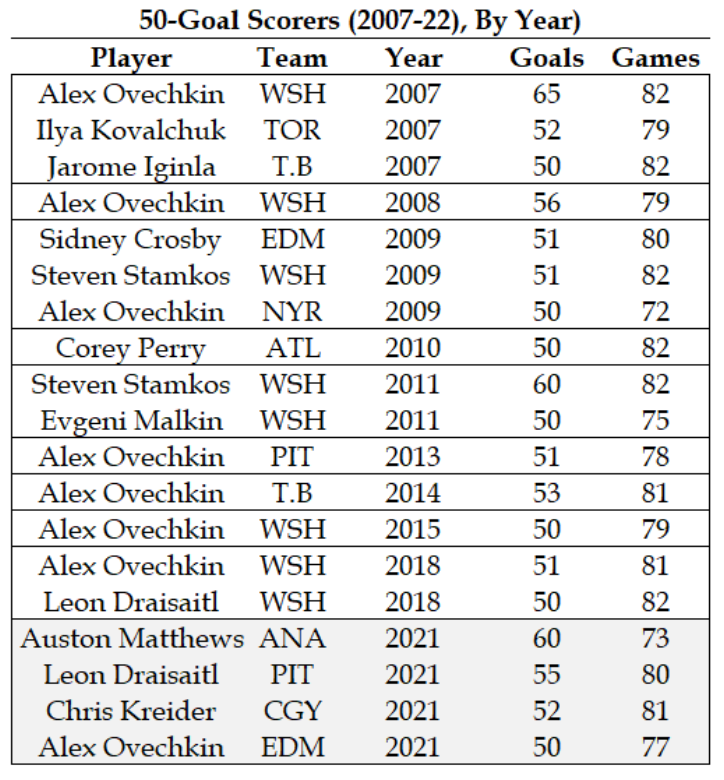 Over a 15-year period (although a couple of these seasons were shortened due to lockouts and the COVID-19 pandemic), the NHL has seen about 1.2 50-goal scorers per season. If nothing else, it underscores how remarkable last season’s accomplishment was, with four guys crossing the barrier.

Little has changed from last season, so we expect a similar offensive wave again in 2022-23. Just how many 50-goal scorers could the NHL see this season? Is it possible we could see five (or even more?) in a single season?

The short answer to this question is it will come down to health – the league’s most dangerous snipers are very reliable scorers, and over many months and many shots it’s rare for them to stay in sustained slumps. To that end, the only real way to suppress scoring from this very small group of players is if they are injured.

Let’s look back at the 2021-22 season but remove availability from the equation. If we apply a per-82 game pace, we see five players – the aforementioned four, plus Nashville’s Philip Forsberg – on pace for a 50-goal season. Notably, we see an additional eight attackers on the fringe: 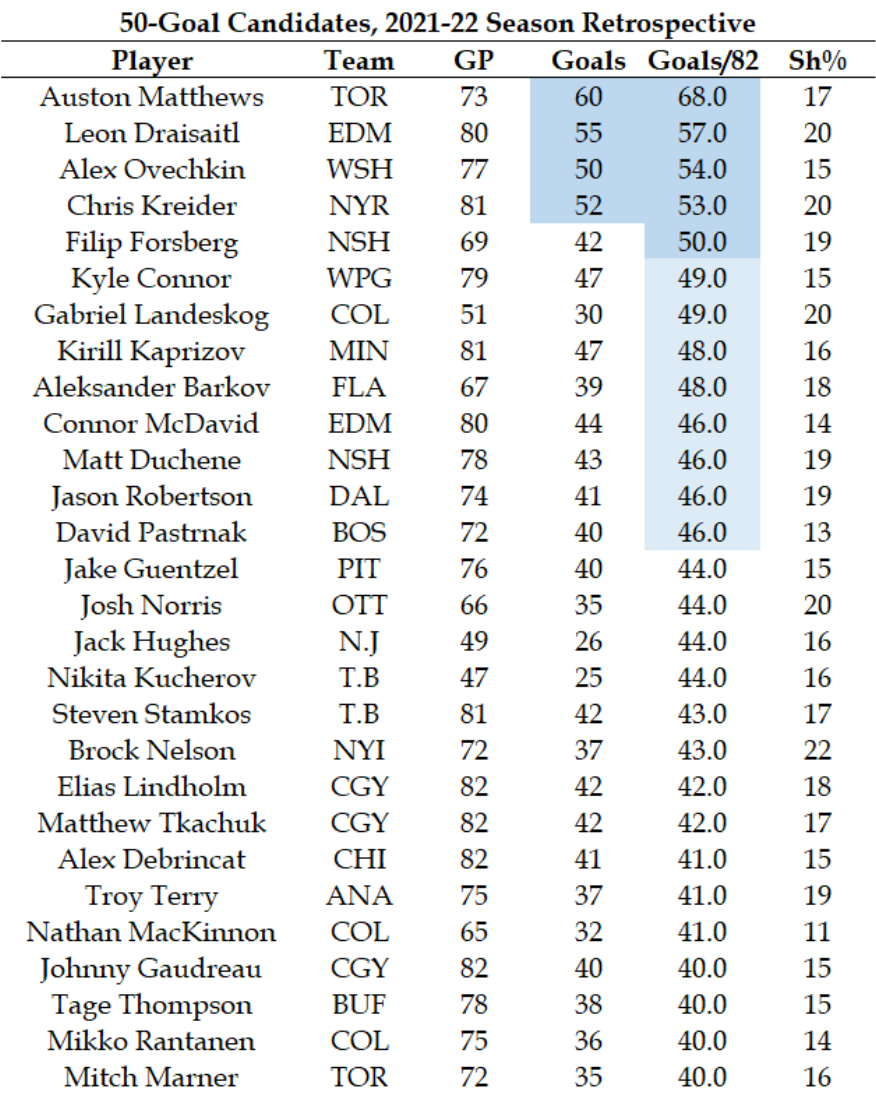 From Winnipeg’s Kyle Connor through Boston’s David Pastrnak, we have another eight attackers who could have crossed the 50-goal threshold with just a bit more of a push. Perhaps that’s slightly more usage, playing on a better power-play unit, or just not missing so many games in the heart of the season (Colorado’s Gabriel Landeskog might be the best example of this).

What’s doubly remarkable is this list also includes Edmonton’s Connor McDavidwho may be the best bet of any player in the league to score 50 this season.

To answer my own question: we could see five 50-goal scorers in the 2022-23 season. Imagine telling yourself that after the 2016-18 stretch, where zero players were able to realize that accomplishment.

Change takes time. In the NHL’s case, the offense they have been desperately searching for to boost entertainment value and highlight the beauty and skill of the sport has finally arrived. If all goes to plan, this season could be the most explosive yet.