After the Vineyard boys hockey team suited up for practice last Friday, they hit the ice with little fuss, warming up with a few drills and stretches.

But this wasn’t any given pre-season practice. As the team fired pucks at an empty net, players remained unphased while a film production crew from the National Hockey League lurked behind the glass, their booms and cameras stretching over the boards, filming every shot, pass, and player on the ice.

Over several days of filming last week, the Vineyarders were the subject of an NHL promotional production in the lead-up to the annual outdoor Winter Classic game, to be played on the second day of 2023 at Fenway Park between the Boston Bruins and the Pittsburgh Penguins. The crew traveled to the Island to document the team, spending hours with players and coaches as they prepared for the first game of the season Saturday.

“I couldn’t think of a better story to tell than the Vineyard kids,” producer Will Cunningham said between stints examining shots on a small monitor at the team’s practice Friday.

When the film crew can skate, too. — Ray Ewing

Mr. Cunningham, a digital content producer for Disney’s streaming services, said he was drawn to the team after he saw players waiting for the ferry on his way back from a wedding on the Island. The travel necessary for the team to simply exist, he said, was reason enough to tell their story.

“Just kind of what it takes for this team to just be,” he said.

As Mr. Cunningham watched over practice and cameramen slid around players on the ice, head coach Matt Mincone kept his focus on the players.

“Let me show you something,” he said, calling a player to his side. He made an example of his play, emphasizing how players should handle the puck around the boards.

Speaking with the Gazette by phone over the weekend, Coach Mincone said the experience of having a production crew follow the team around was unique for a group of players and coaches more familiar with local print journalists, not cameramen, in the press box. 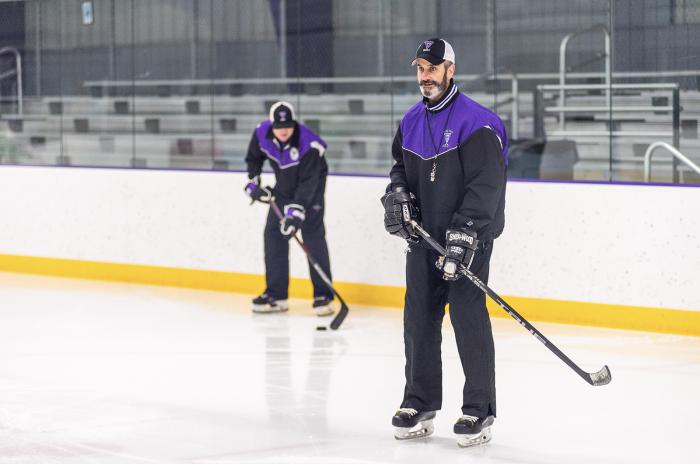 Mr. Mincone said he was mic’d for about five days as the production crew observed the team. He took interviews in his job as West Tisbury police chief, on ferry rides to games and at practice. While he said the team enjoyed the spotlight, he noted the stresses of having to keep on his game at all times.

“Yeah it was crazy. It was a distraction like I’ve never had before,” Mr. Mincone said. “I’m glad it’s not an everyday thing.”

After the crews had left and the hockey team was back to its normal routine, Mr. Mincone said he felt the Vineyarders’ experience reflected that of other hockey programs on the Cape and Islands. As Mr. Cunningham saw it, there was a deeper story to be told about the transition from bustling Island summers to the seemingly quiet activities of the Island in the winter, when main streets are empty but places like the MV Arena come alive.

Throughout the production, Mr. Cunningham said he was able to capture some of that off-season wonder as he followed the team and spoke with the Islanders.

“Everybody on the Island has been amazing,” he said. “It couldn’t have gone any better, and we got a great bunch of stuff as a result.”

Mr. Mincone said he’s not sure exactly how the NHL will use the final product resulting from the production, but hoped it would be packaged with promotional material for the Winter Classic.

No matter how the footage makes its way to public eyes, Mr. Mincone said he has faith that Mr. Cunningham will tell an honest story about the Vineyard and the culture that surrounds its hockey team.

“Will was such a regular guy to deal with, but I know he’s an artist,” Mr. Mincone said. “No matter what the story is going to be, it’s going to portray us pretty well.”