Methane has 84 times the warming power of carbon dioxide in the atmosphere.

A high-resolution satellite image taken less than 48 hours ago shows a cloud of the powerful greenhouse gas methane near a waste facility in India. The image is the second in a series of exclusive observations Bloomberg Green will publish during COP27 from emissions monitoring firm GHGSat Inc.

The detection highlights how piles of garbage – which generate the potent greenhouse gas when organic material like food scraps break down in the absence of oxygen – are triggering some of the world’s strongest and most persistent methane emissions.

Landfills and wastewater are responsible for about 20% of the methane emissions generated from human activity.

The satellite image was taken at 1:28 pm Mumbai time on Nov. 5 and shows a plume of methane that GHGSat attributed to a landfill in India. The estimated emission rate was 1,328 kilograms per hour of methane. Landfills tend to be persistent emitters, according to the Montreal-based company.

Scientists say reducing the emissions of the potent greenhouse gas, which has 84 times the warming power of carbon dioxide during its first two decades in the atmosphere, is one of the fastest and cheapest ways to cool the planet.

Failing to curb releases from the waste sector could derail global climate goals. Diverting food scraps and other organics before they enter a landfill is crucial to limiting future emissions. The impact of legacy dumps can be mitigated through aerating piles of trash and gas capture systems.

The latest imagery comes as world leaders gather in Egypt this week to discuss climate change policy, with the UN warning that global temperatures in 2022 are likely to end up about 1.15C above the average in pre-industrial times, making it the fifth or sixth hottest year on record.

The first image in the series, published Sunday, showed six methane releases in northeast China near the Daqing oilfield, according to GHGSat. Estimated emission rates ranged between 446 and 884 kilograms per hour and the cumulative rate was 4,477 kilograms an hour. 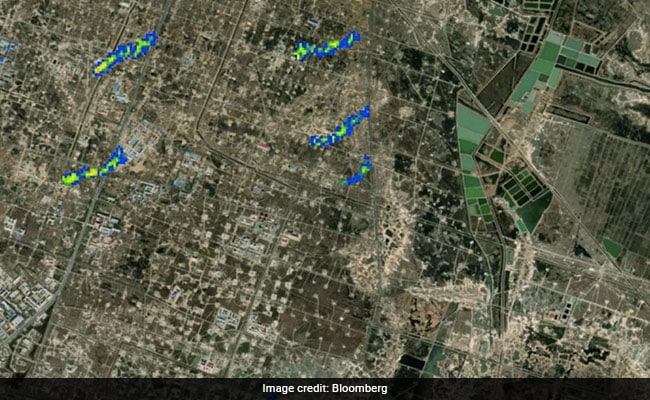 A GHGSat satellite observation over China.

If the releases lasted for an hour at that rate they would have the same short-term climate impact as the annual emissions from about 81 US cars.

Methane is the primary component of natural gas and responsible for about 30% of the Earth’s warming.

Leaks can occur during extraction and transport of the fossil fuel, but methane is also routinely generated as a byproduct of oil and coal production and if operators don’t have infrastructure to get the gas to market they may release it into the atmosphere. The International Energy Agency has called for oil and gas operators to halt all non-emergency methane venting.

The detections highlight the rapidly expanding ability of satellites to identify and track methane almost anywhere in the world that is driving a new era of climate transparency in which greenhouse gases will be quantified and attributed in near real-time to individual assets and companies.

More companies and institutions are launching multi-spectral satellites that can detect methane’s unique signature. GHGSat has six satellites in orbit now dedicated to monitoring industrial methane and aims to launch another five by the end of next year.

The US non-profit Environmental Defense Fund plans to launch its MethaneSAT in 2023 and a consortium including Carbon Mapper, the state of California, NASA’s Jet Propulsion Laboratory and Planet Labs expects to launch two satellites next year.

In 2021, concentrations of methane in the atmosphere had the biggest year-on-year jump since measurements began four decades ago, according to the World Meteorological Organization.

(Except for the headline, this story has not been edited by NDTV staff and is published from a syndicated feed.)

Featured Video Of The Day