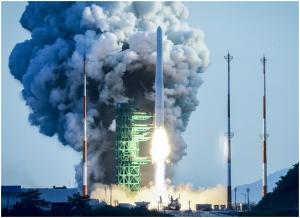 The demonstration and dummy satellites on Korea Space Launch Vehicle-II (KSLV-II) were successfully put into orbit at the second attempt on June 21. South Korea has become the seventh country in the world that is capable of launching an application satellite with a weight of at least 1 ton on a space launch vehicle of its own making.

The vehicle was launched at 16:00 and then the satellites were separated successfully. The satellites are currently orbiting around the earth at a speed of 7.5 km per second and at an altitude of approximately 700 km.

The Korea Aerospace Research Institute and more than 300 private-sector companies initiated KSLV-II development in March 2010. In 2018, a test launch vehicle that is a single-stage rocket for 75-ton liquid-fuel engine testing was launched successfully. The first attempt was on Oct. 21 last year. At that time, primary and secondary as well as fairing separation was as intended, but the dummy satellite failed to go into orbit for abnormal engine combustion.

South Korea’s future space projects, including additional KSLV-II launch and next-generation launch vehicle development, are expected to be boosted by the success on June 21. Specifically, KSLV-II is scheduled to be launched four more times by 2027 at an investment. of 687.3 billion won and one of the four is scheduled for the first half of next year. More than 10 small and microsatellites are supposed to be launched with the vehicles.

The projects also include growing a space launch vehicle powerhouse company by technology transfer and KSLV-III development for transport to the moon and Mars. The latter is currently in the stage of feasibility studies and more than 1.9 trillion won may be invested from 2023 to 2031, a lunar module launch target year.

South Korea’s first deep space project is successfully underway as well. In this project, the Korea Pathfinder Lunar Orbiter as its first space probe will be launched in the United States in August this year. The orbiter is scheduled to be launched on a Falcon 9 rocket at 08:37, Aug. 3 to reach the moon in 137 days.