By Maria Chiorando For Mailonline

The Queen was seen looking emotional at the Platinum Jubilee celebration near Windsor Castle this evening, as a moving tribute was paid to Prince Philip who died last year.

Her Majesty’s granddaughter Lady Louise, daughter of Prince Edward and his wife Sophie, led the tribute, driving Philip’s carriage around the arena during the emotional procession at the finale of the ‘Gallop Through History Platinum Jubilee’ event, which was staged by the Royal Windsor Horse Show.

The tribute was particularly poignant, as the Queen’s 18-year-old granddaughter shares a passion for carriage driving with her beloved grandfather, who was instrumental in helping to establish it as a sport in Britain.

Carriage driving was one of Prince Philip’s favorite past-times since the 1970s, and he raced carriages near Norfolk before going on to represent Britain at several world and European championships.

The Queen, pictured while watching ‘A Gallop Through History Platinum Jubilee’ at Windsor Castle, was seen looking tearful as her granddaughter Lady Louise drove Prince Philip’s carriage around the arena during an emotional tribute to the late royal 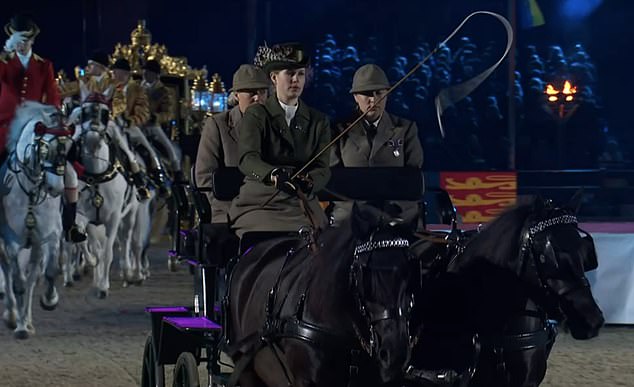 Lady Louise (pictured, left, during the Platinum Jubilee event tonight) is believed to have inherited her passion for carriage driving from her beloved grandfather 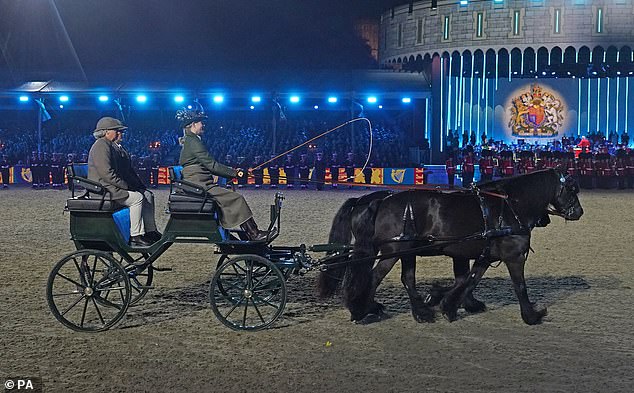 Carriage driving was one of Prince Philip’s favorite past times, making the tribute particularly poignant, with Lady Louise driving his carriage

Since inheriting her interest in the activity from the Duke of Edinburgh, Lady Louise is regularly seen carriage driving in Windsor, and at competitive events, including last month’s British Indoor Carriage Driving Championships.

The tribute came near the end of the night’s entertainment, which saw ITV hosts Phillip Schofield and Julie Etchingham deliver the event to the nation from an on-site studio hub from inside the grounds of Windsor Castle.

The gala featured more than 1,300 performers, 500 horses, children’s choirs, a 75-piece orchestra and stars from stage and screen.

Among the entertainment was musical performances from Keala Settle, the singer and actress from The Greatest Showman film, and opera singer Katherine Jenkins.

In addition, different eras of British history were enacted onstage as part of the show. Dame Helen Mirren, who has played both Queen Elizabeths on TV and film, reprised her role as the Tudor Monarch.

Despite the emotional tribute, her Majesty was pictured looking sprightly and in good sprits throughout the evening’s entertainment 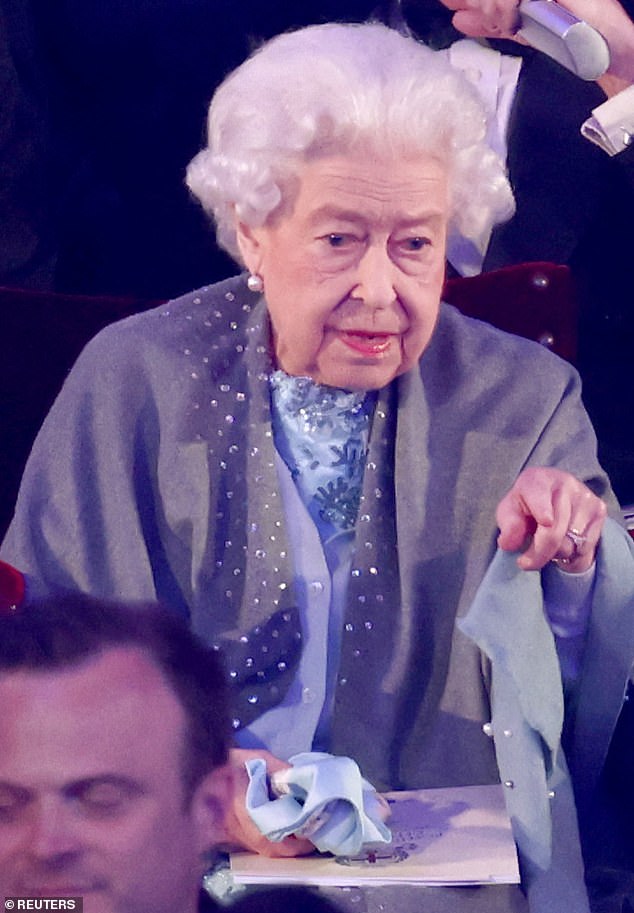 The monarch is famously enamored with equestrian events, and so many anticipated she would attend this evening’s performance, which was staged by the Windsor Royal Horse Show

Meanwhile, some of the Queen’s horses and ponies also took to the arena alongside carriages from the Royal Mews, led by Lady Louise driving Prince Philip’s carriage.

Prince Philip spoke about how he took up carriage driving when he stopped playing polo at the age of 50, during a May 2017 interview.

He said: ‘I was looking round to see what next, I didn’t know what there was available. And I suddenly thought, well, we’ve got horses and carriages so why don’t I have a go.

‘So I borrowed four horses from the stables in London, took them to Norfolk and practiced and thought – why not?’