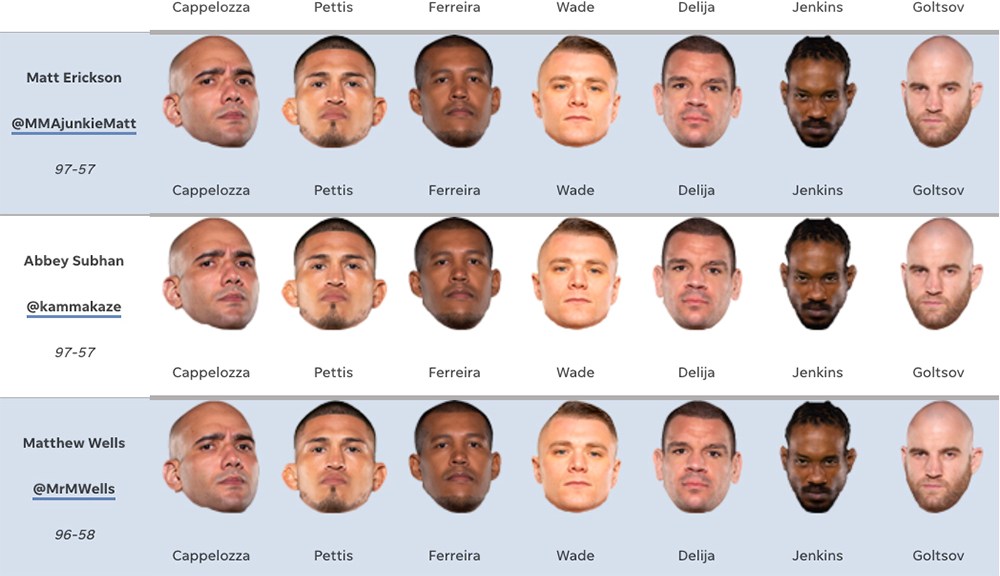 The PFL is back with more second-half regular season fights in the featherweight heavyweight divisions, as well as one key lightweight bout.

(Click here to open a PDF of the staff picks grid in a separate window.)

In the main event, Bruno Cappelozza (15-5) takes on Matheus Scheffel (15-8) at lightweight. Cappelozza is one of three heavyweights who have 6 points in the standings from first-round stoppage wins in their first fights. Cappelozza is a big favorite, and he’s one of six unanimous picks in seven fights on the main card from our 11 editors, writers, radio hosts and videographers.

In the co-feature, Anthony Pettis (25-12) meets Stevie Ray (23-10) in the only lightweight bout on the card. Pettis is tied atop the standings with 6 points. A finish would guarantee him a playoff spot. He’s another of our many unanimous picks.

Also on the main card, Chris Wade (21-7) is in a five-way tie atop the featherweight standings with 3 points. He’s an 11-0 pick from our staff members against Kyle Bochniak (11-6).

Back at heavyweight, Renan Ferreira (9-2) has 6 points in the standings heading into his bout against Klidson Abreu (16-5), who has 3 points from a decision win in his first fight of the seasosn. Ferreira is more than a 4-1 favorite and a unanimous pick.

Ante Delija (20-5) is the biggest favorite on the card in his heavyweight bout against Shelton Graves (9-5). He has 5 points in the standings, just behind three fighters with 6. He’s a unanimous pick, as well.

Bubba Jenkins (17-5) has an unanimous nod in his featherweight bout against Reinaldo Ekson (18-5). Jenkins has 3 points and is part of the five-fighter deadlock atop the standings. Ekson is fighting for the first time in the regular season as a late replacement.

And to open the main card, Denis Goltsov (28-7) takes on late replacement Maurice Greene (10-6) at heavyweight. Goltsov has 6 points in the standings, and Greene is making his PFL debut. Goltsov is a 9-1 pick from our staff members.

Check out all the picks above.