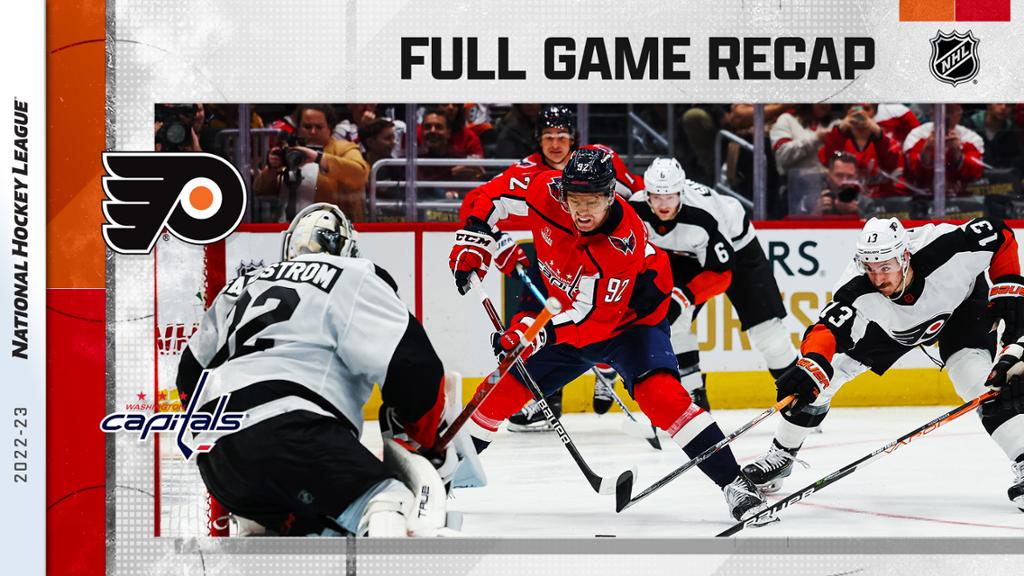 WASHINGTON — Alex Ovechkin scored at 1:04 of overtime, and the Washington Capitals handed the Philadelphia Flyers their eighth straight loss with a 3-2 win at Capital One Arena on Wednesday.

Ovechkin scored on a one-timer from the left face-off circle off a pass from Dylan Strome.

“Great pass, obviously,” Ovechkin said. “I just have to hit the net.”

Video: [email protected]: Ovechkin fires in a pass to get the OT win

Marcus Johansson and Sonny Milano scored for the Capitals (8-10-3), who had lost four straight (0-3-1). Ovechkin had an assist, and TJ Oshie had two assists in his return after missing 11 games due to a lower-body injury.

Darcy Kuemper made 21 saves for Washington, which trailed 2-1 late in the third period.

“It hasn’t gone our way and we’ve got to start somewhere digging out,” Capitals coach Peter Laviolette said. “It was a gutsy win, just staying with it. It was one of those games where it seems like you’re not going to find that next one. You’re pushing, you’re pushing, and I thought guys just stuck to it.”

Morgan Frost and Patrick Brown scored for the Flyers (7-8-5), who are 0-5-3 during their skid. Felix Sandstrom made 29 saves.

“It’s definitely frustrating,” Frost said. “We’ve got to learn how to close out a game. It’s obviously huge. We thought we played a pretty solid game and then we just gave it away at the end. So, it’s tough.”

Milano tied it 2-2 at the left post with 2:58 left in the third when he converted a pass across the slot from Evgeny Kuznetsov on the rush.

“Saw ‘Kuzy’ had a lot of space and I just tried to match his speed,” Milano said. “I got to the back door, and he threw it to that spot, and it went in.”

Philadelphia coach John Tortorella said, “The frustrating part for me is the second goal. It’s a coverage we have gone over time and time again and we just don’t do it correctly. It cost us the second goal.”

Frost gave the Flyers a 1-0 lead at 5:27 of the first period when his wrist shot on the rush bounced off Kuemper’s blocker, over the goalie and into the net.

Johansson had a goal overturned on the power play at 10:43 following a coach’s challenge by the Flyers when it was ruled that Johansson kicked the puck into the net.

Johansson tied it 1-1 at 11:05 during the same power play. Ovechkin’s shot off a rebound went between Sandstrom’s pads and deflected off Johansson’s stick on the way into the net.

“It was kind of messy there in the first PK,” Sandstrom said. “I was almost a bit too aggressive, so it slid under my pad. It’s a tough one, but I think it drew me into the game and I got better and better.”

Brown gave Philadelphia a 2-1 lead at 14:33 of the second period when Ivan Provorov‘s spinning backhand shot from the bottom of the right circle deflected off Brown’s skate.

NOTES: Ovechkin scored on a 164th goalie, tying Mark Messier for the third-most in NHL history behind Jaromir Jagr (178) and Patrick Marleau (177). With 790 goals, he is 11 from tying Gordie Howe for second on the NHL list. … The Flyers were 0-for-4 on the power play and are 2-for-26 (7.7 percent) during the past eight games. … Philadelphia forward Kevin Hayes had his season-high six-game point streak end.