We are only 22 days into 2023 and already we have a candidate for the worst match of the year. It may have sounded good on paper but the MMA match for the King of Pro Wrestling Championship between champion Shingo Takagi and challenger The Great-O-Khan was nothing but a borefest at NJPW The New Beginning.

“A thirty count match would have been better,” said commentator Kevin Kelly referring to the other stipulation that was on offer and he was right.

As per the stipulation, there were no pinfalls. Either man could only win via knockout, stoppage or submission. The match must also take place in the ring. The winner also wins the right to challenge Kazuchika Okada for the IWGP World Heavyweight Championship on February 11th at The New Beginning in Osaka.

Khan and Takagi come to the ring in martial arts Gis. They both struggle to gain control at first each reaching for and slapping away the other. Khan takes Shingo down into an arm lock. Shingo breaks free and heads to a corner leaving Khan on the mat. Khan goes for an ankle lock but Takagi reaches for the ropes.

Shingo flips Khan out of the ropes, hits him with a shoulder tackle and a senton splash. Shingo mistakenly goes for a pin which Red Shoes waves off. Khan rolls to the outside of the ring. Ospreay calls for a time out as Henare fans Khan with a United Empire flag. Red Shoes demands Shingo return to the ring. LIJ comes down to the ring in full force after the United Empire’s shenanigans. The fans cheer their arrival.

Shingo gets fed up and tosses off his Gi, much to the delight of the fans. Shingo forsakes the MMA nonsense and hits Khan with a DDT and a sliding lariat. Khan locks on a choke and Shingo’s only hope for escape is the ropes. Khan smothers Takagi with his Gi. Khan takes off his belt and starts strangling Shingo. Hiromu Takahashi gets on the apron to protest and Francesco Akira rushes into the ring and knocks Hiromu back out. Khan asks Akira to leave. 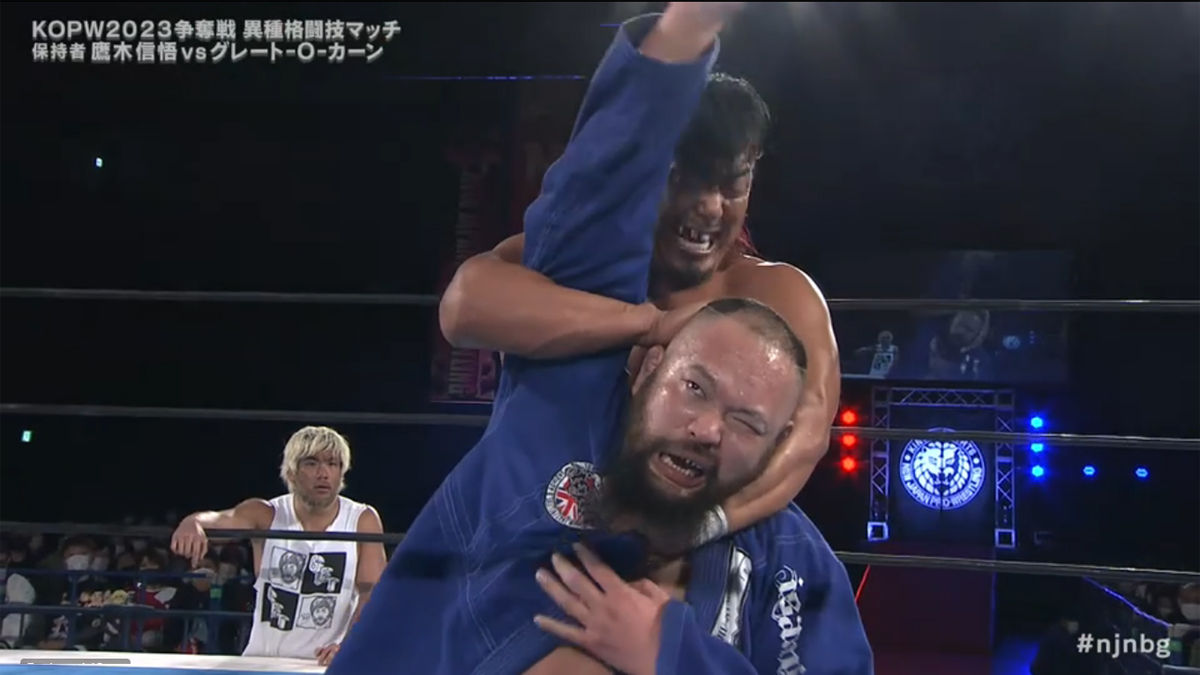 Khan hangs Shingo over the top rope using his belt. The United Empire fends off LIJ so they cannot help their comrade. Red Shoes finally breaks up Khan’s shenanigans but the damage has already been done. Naito and Sanada try to help out Shingo. Ospreay throws Naito into the steel barricade. Henare holds Shingo so Ospreay can hit an OzCutter on Shingo off the ringside barricade.

Khan slams Shingo to the mat forcing the official to lay a count on Shingo. Shingo barely manages to beat the count. Shingo battles back to a Last of the Dragon and the count begins on Khan. Khan gets up at nine. Shingo blasts Khan with elbow smashes to the neck and head. He follows up with a chokehold which sends Khan to Dreamland for the win.

After the match Kazuchika Okada came down to the ring to jaw with Shingo. It is great timing because Shingo has an important announcement to make. 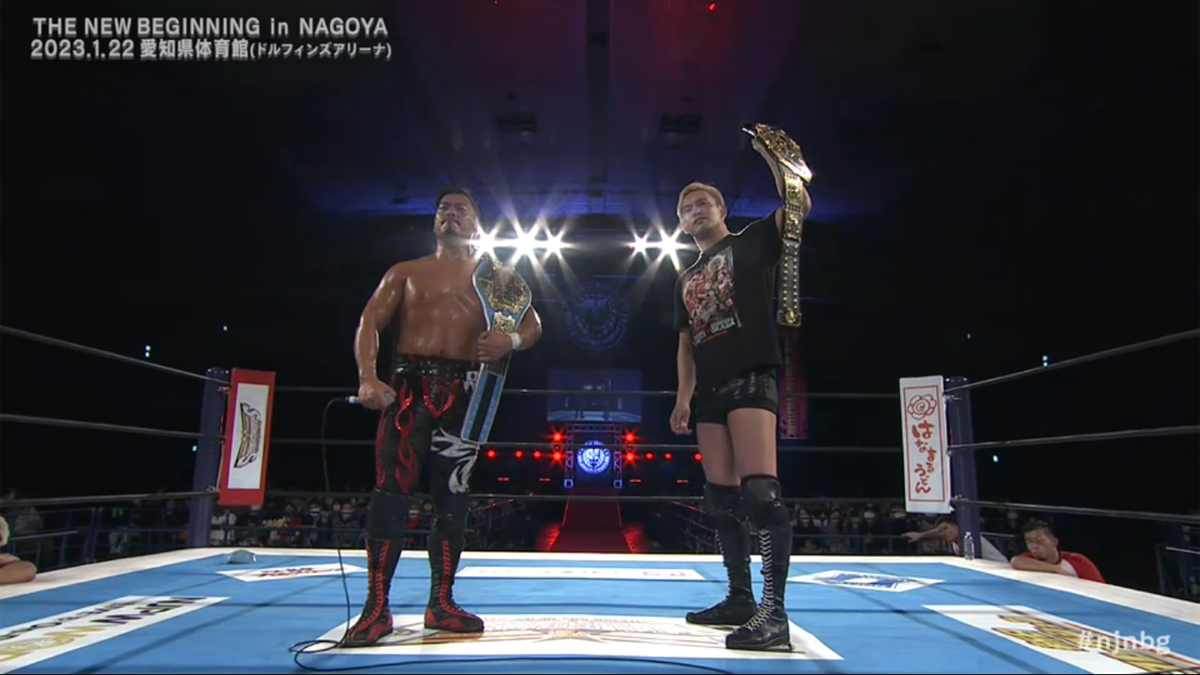 Okada and Shingo pose with their respective gold. Courtesy: NJPW.

“This KOPW stuff is incredible but I don’t want two belts at the same time. I cannot love two belts. I only have eyes for one. I only love the IWGP World Heavyweight Championship,” joked Okada.

“Do you think without some gimmicky rule that you cannot beat me? If that’s the case, you really don’t deserve a shot,” replied Okada saying they should wrestle for the title and nothing more.

“I figured you’d say that. In that case, after the match I will be the double champion,” said Shingo. 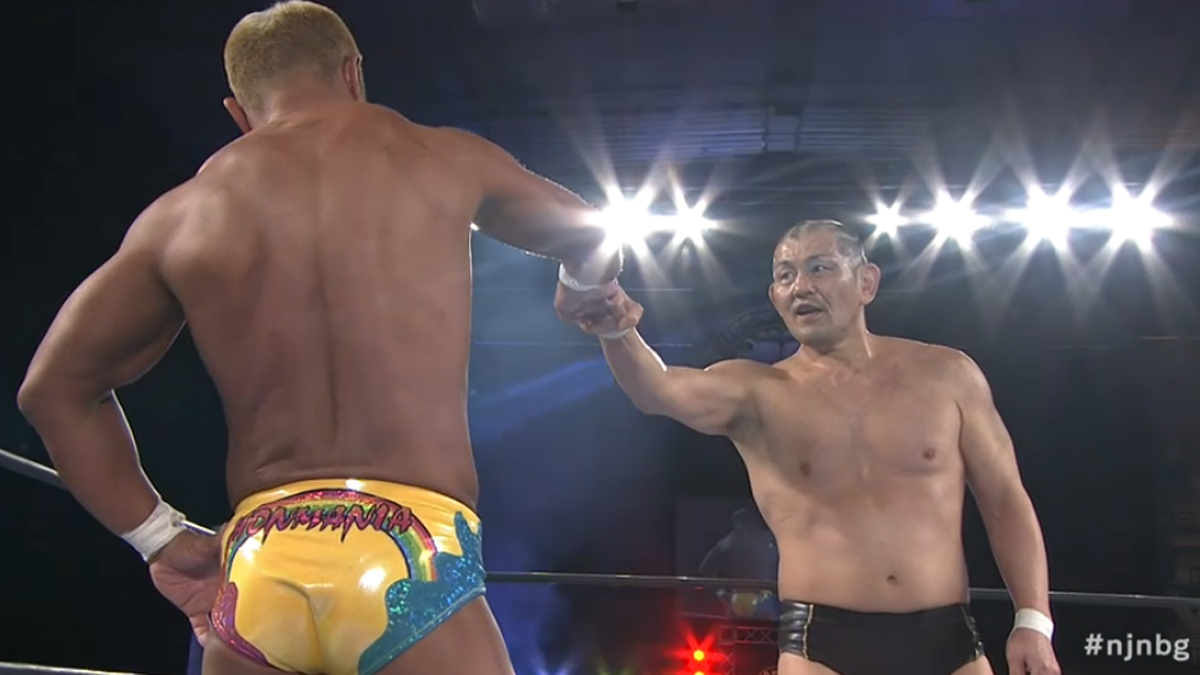 Suzuki being civil? Who would have thunk it? Courtesy: NJPW.

Before the match Suzuki stares Narita down. At the end of the match Suzuki reaches for a tag but Narita refuses. Suzuki slaps him across the chest so Narita has no choice but to enter the match. Evil distracts the official. Sho slides Togo his garrote. Togo starts to choke out Narita. Suzuki makes the save. Narita makes Togo tap out to the Cobra Twist. On behalf of himself, Narita and Desperado, Suzuki challenges House of Torture (Evil, Sho and Yujiro Takahashi) to a match for the NEVER Openweight 6-Man Tag Team Championships. 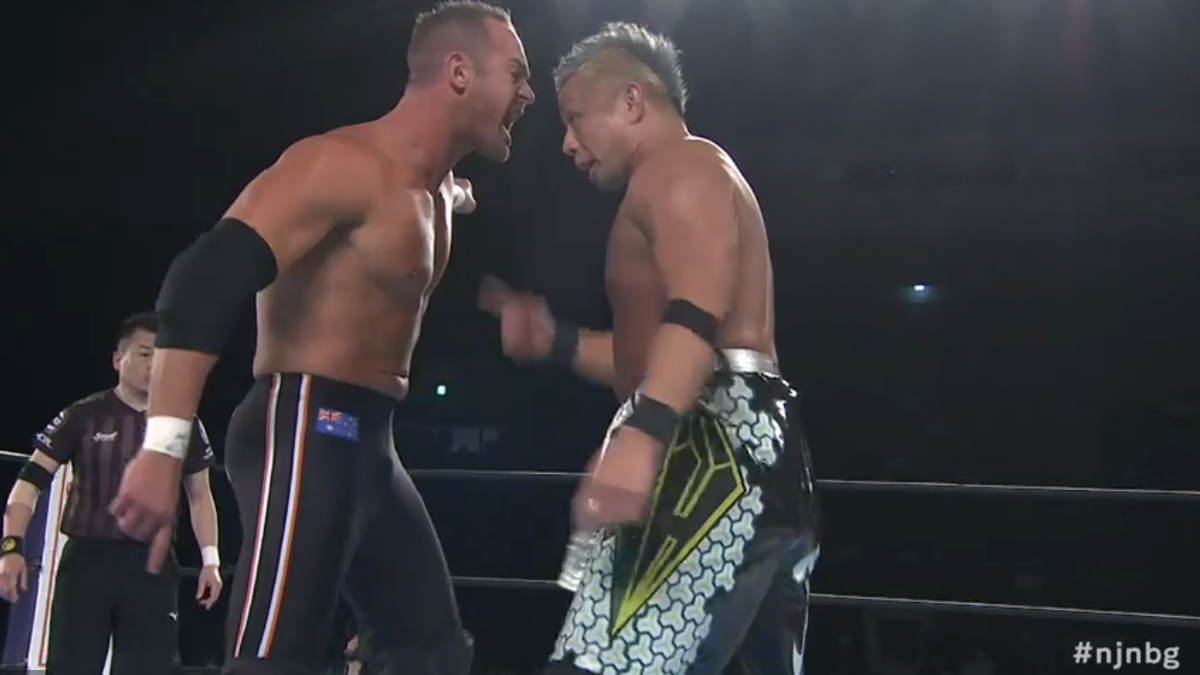 TMDK woke up on the wrong side of the bed this morning. Courtesy: NJPW.

Shane Haste pins Fujita with a drop kick and a powerbomb.

The faces have the heels all tied up in simultaneous submission holds. El Phantasmo kicks out of Jado’s backbreaker slam. Kenta prevents Jado’s Dream Killer on Phantasmo. Phantasmo pins Jado with Sudden Death.

Douki stuns Ospreay with a couple of kicks. Akira intervenes with a swinging DDT on Douki. Ospreay leaps across the ring with a Hidden Blade to pin Douki.

Umino runs roughshod on Naito near the end of the match, taking the leader of LIJ by surprise. Naito kicks out of a Fisherman’s Suplex. Umino and Naito trade forearm shots in the middle of the ring. An atomic drop, elbows to the head and a neckbreaker halt Umino’s momentum. Bushi nails Umino with a missile drop kick from the top rope. A pop-up forearm smash and a reverse DDT score Umino a two count on Bushi. Umino pins Bushi with Death Rider. Hiromu shoves his IWGP Jr. Heavyweight Championship belt in Sho’s face. They get into a shoving match. Naito and Umino have a staredown.