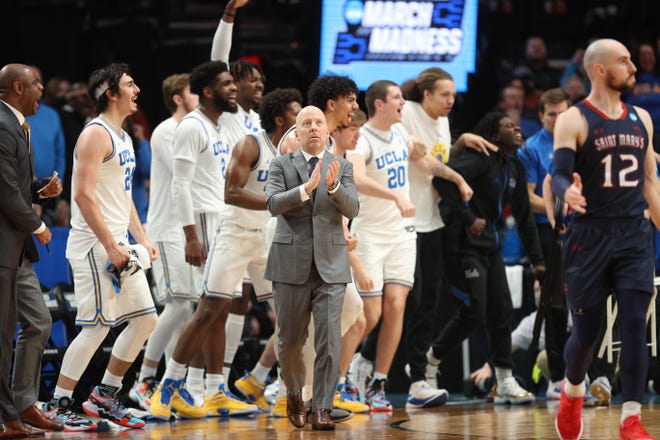 The men’s NCAA Tournament second round started in exciting fashion on Saturday, with one No. 1 seed going down and another barely avoiding the upset.

North Carolina built a 25-point lead against No. 1 Baylor, only to watch it wither away play-by-play in the game’s last 10 minutes, before defending national champions finally forced overtime. UNC showed its resolve by gutting it out in the extra frame to advance to the Sweet 16.

“I’m so proud of these guys,” UNC coach Hubert Davis said afterward. “This is a group that shows toughness, resiliency. One of the things I wanted them to do was have their own testaments, their own March Madness moments. ”

No. 1 seeds Kansas and Gonzaga evaded similar fates in making key plays down the stretch to send Creighton and Memphis home, respectively. Michigan showed what getting an at-large bid can do for a program, upsetting Tennessee to reach the Sweet 16 – just a week after being a bubble team and unsure of hearing its name called on Selection Sunday.

And then giant killer Saint Peter’s kept its Cinderella run going by dispatching Murray State to reach the Sweet 16. The Peacocks are just the third ever No. 15 seed to make it to the second weekend of March Madness.

A look at all the winners and losers from Saturday’s slate of games.

The Peacocks (21-11) have all the key ingredients to be one of the best Cinderellas in NCAA Tournament history and that was on full display in a 70-60 second round win over Murray State. Doug Edert was a hero again, scoring 10 of his 13 points in the game’s final minutes in an array of clutch possessions. But the real workhorse on this team is KC Ndefo, who finished with 17 points, 10 rebounds and six blocks.

The Bruins (27-7) saw one of their best players, Jaime Jaquez Jr., go out with an ankle injury with seven minutes left in their second-round clash with Saint Mary’s. Instead of falling apart, they instead used the adversity as motivation to pull away for a Sweet 16-clinching 72-56 win over the Gaels. That’s the type of resiliency of a Mick Cronin-coached team. It started with do-everything point guard Tyger Campbell, who finished with 16 points and four assists, pacing a UCLA team with four players in double figures. A surprise Final Four finisher last year, this group looks determined and poised to get back there this year.

The Tar Heels were exhaling after nearly blowing a 25-point lead in their 93-86 overtime win against Baylor. While much of the storyline will center on the Bears ‘comeback – nearly the biggest comeback in NCAA Tournament history – two takeaways to note from coach Hubert Davis’ team: The resolve to pull out the win in overtime and how incredible the Tar Heels looked for the first 30 minutes of this game. If Brady Manek doesn’t get ejected for a flagrant foul, he may have kept draining threes and UNC could have won by 30-plus – against a No. 1 seed. North Carolina is the real deal this March, and this upset is proof.

The Jayhawks (30-6) won at the free-throw line, where they shot 19 for 20 (95%), dispatching No. 9 seed Creighton 79-72 to advance to the Sweet 16 in Chicago. That was a difference-maker in a close game that saw Creighton get within one point in the final minute. Coach Bill Self didn’t always utilize Arizona State transfer Remy Martin (20 points off the bench) throughout the year, but Martin’s first-half offensive flurry positioned KU to pull this one out.

The No. 11-seeded Wolverines (19-14) got 27 points from 7-footer Hunter Dickinson, who played with determination to send Michigan to the Sweet 16 with a 76-68 win over Tennessee. Eli Brooks added 21 points and five assists in the win. All of a sudden, a season of underachievement seems far away. After garnering a No. 1 seed in last year’s NCAA Tournament behind Juwan Howard, this season saw Michigan stumble in the Big Ten to barely make the field. The Wolverines have undoubtedly made the most of their No. 11 seed now.

The Razorbacks (27-8) evaded an upset by surviving New Mexico State 53-48 and have reached the Sweet 16 for the second consecutive year under coach Eric Musselman. Arkansas defenders contained Teddy Allen, who broke out for 37 points in the first round, to just 5-for-16 shooting and 12 points. They kept the pace and tempo of the game in their favor and veteran JD Notae (18 points) was solid in the win as usual.

Coach Ed Cooley knows many people were picking against the Big East champion Friars in the first round against South Dakota State. After shaking off that upset bid, Providence looked absolutely dominant in a 79-51 rout of Richmond in their second-round matchup in the Midwest Region. The Friars (27-5) shot 12 for 22 (55%) from 3-point range while containing the Spiders to 1 for 22 (5%).

The final 10 minutes of regulation were arguably the most inspired basketball coach Scott Drew’s group played all season, willing their way back to tie the game at 80 in regulation and force overtime. Yet after coming back from 25 points down, with all the momentum in the Bears’ favor, they shot 1 for 11 from the floor in overtime. That finish, along with the ugly start, showed that this Baylor squad isn’t in the same stratosphere as last year’s national title team. Still, Adam Flagler (27 points) James Akinjo (20 points), Matthew Mayer (10 points, three charges) and Co. fought in a way they should be proud of.

“Never underestimate the heart of a champion,” Drew said afterward, getting emotional. “They can put their head on their pillow knowing they gave it their all. The perseverance they showed. … We didn’t win on the court. But we win in life.”

The Tigers (22-11) led by 12 points in the second half but watched top-seeded Gonzaga storm back and take control of the game on the play of Drew Timme. In the closing minutes of the game, Memphis kept chipping away but didn’t execute well enough to knock out the top overall seed in the tournament. Coach Penny Hardaway had several occasions where he should’ve called timeout to offset the ‘Zags’ surge. A 4-for-19 shooting clip from 3-point range didn’t do this team any favors, either.

The Volunteers (27-8) were heavily favored against No. 11 seed Michigan, which barely got into the field of 68 as a bubble team. But Tennessee wasn’t on its A-game and shot just 2 for 18 (11%) from beyond the arc, as Michigan pulled away for a 76-68 upset. This was perhaps coach Rick Barnes’ best shot at getting a Tennessee team to the Final Four, and not making it to the second weekend of the tournament after such a strong regular season serves as the definition for underachievement.

The Racers (31-3) were riding a 21-game winning streak and had a No. 7 seed for a reason despite playing in a mid-major conference. But Murray State could not match the intensity that No. 15-seeded Saint Peter’s brought into the game from the tip. The Racers never led all game and were playing catch-up. By the time this team finally started to put together a run at the end, it was too late and Saint Peter’s had a counter-punch. Murray State got out-rebounded 38-31, which never should’ve happened considering how good this team is on the glass (ranking fourth in rebounding margin) compared to the small mid-major from the MAAC (ranking 105th).

The Bluejays (23-12) had the top-seeded Jayhawks on the ropes but crumbled on their last three possessions late in the game. Credit Kansas’ defense in Creighton’s loss and poor playmaking in crunch time, but a key turnover by Trey Alexander with 1:01 left proved most costly when the Bluejays were within striking distance (down 73-72). Freshman Arthur Kaluma (24 points, 12 rebounds) was excellent in the paint vs. KU and has a bright future ahead.