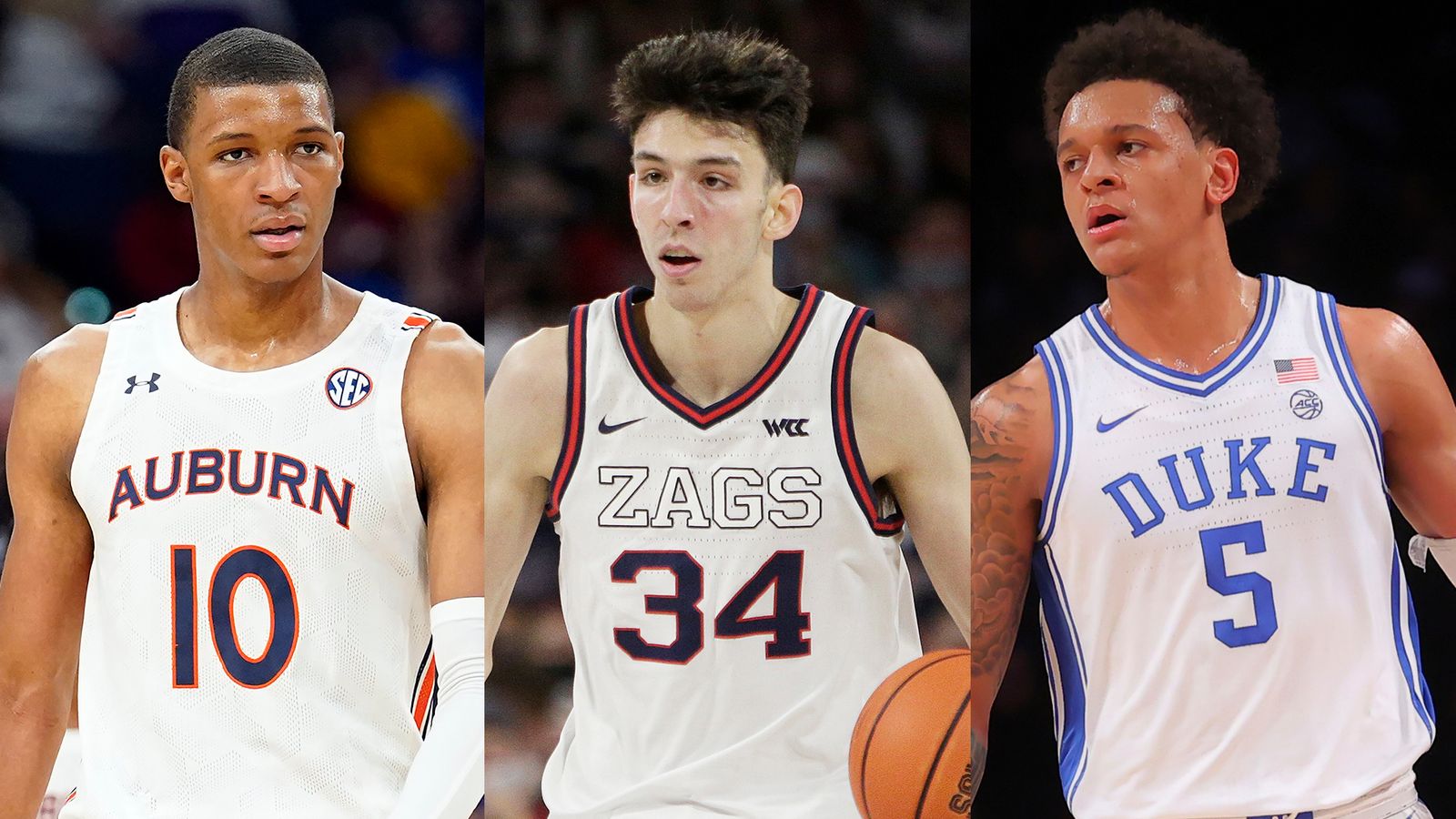 It’s that time of year again, silly season ahead of the NBA Draft.

And the Orlando Magic, who have this year’s No 1 pick, are better at posturing than most.

The team has teased so much, yet given away so little, in regards to to who they will draft.

The top candidates for the pick are well known: Auburn’s Jabari Smith Jr. worked out for Orlando earlier this month, Gonzaga’s Chet Holmgren met with the Magic for multiple days last week and Duke’s Paolo Banchero has been working out with former Magic guard Mike Miller.

However, despite teases on social media, nobody has a clue which name will be called first on Thursday night.

“There’s so much subterfuge going on and there’s so much gamesmanship,” Orlando Magic President Jeff Weltman said. “One of the things that we’ve done well and we do well, and I’m really proud of our guys for being able to say this, is we are buttoned up. And I think it’s really important to act that way.”

College basketball season ended almost three months ago, the NBA draft lottery was more than a month ago and the draft itself is later this week.

“I tell you, it’s still early in the process,” Weltman said on Monday.

Ostensibly, that means the Magic probably haven’t fully decided yet what they’ll do on Thursday night. They will have their pick of options, and that doesn’t just mean the top three players. Other teams have called to gauge what the asking price would be if they want to trade for that selection, and the Magic have evaluated all the top candidates.

But Weltman sees no reason to decide anything before it’s absolutely necessary, especially given the opportunity that Orlando has by holding this No 1 pick.

“Dialogue is always ongoing,” Weltman said. “But, most importantly, we get to do what we want. That’s the real benefit of having the No 1 pick.”

This is the fourth time that Orlando will be making the first pick. The Magic took Shaquille O’Neal with the top selection in 1992. Chris Webber was the No 1 pick by Orlando in 1993, and he got traded that same night for Penny Hardaway and a package of future picks that were eventually turned into Vince Carter and , later, Miller. And in 2004, the Magic selected Dwight Howard with the first pick.

The No 1 pick on Thursday will join a young core in Orlando that already includes 2017 top pick Markelle Fultz, a pair of top-eight picks from the 2021 draft in Franz Wagner and Jalen Suggs, and Cole Anthony – the flamboyant No 15 pick in the 2020 draft.

Orlando also has the No 6 picks from the 2017 and 2018 draft, Jonathan Isaac and Mo Bamba. It’s possible that when next season starts Orlando could have as many as six lottery picks, nine top-16 selections and 12 first-rounders on its roster.

This is all part of the challenge for the Magic – who also have the No 32 and No 35 picks this year – going into Thursday: Finding more youth that fits with the current core, finding ways to be better next season and sustainably better for years to come.

“We do want to get better but not at the expense of rushing back to mediocrity,” Weltman said. “And we do want to have something sustainable. But you have to elevate the standard to do that. You can’t just stay at the basement level, you know, interminably. So those are conversations that we’re having, which players do that for us. “

Here’s a look at the draft’s top players:

The nation’s No 1 recruit lived up to expectations for the Gonzaga Bulldogs as a second-team All-American.

Strengths: The 7ft, 195-lb Holmgren has an unusual mix of fluid perimeter skills with a roughly 7’5 “wingspan. He averaged 14.1 points, 9.9 rebounds and 1.9 assists while shooting 60.7 per cent alongside a returning AP All-American in Drew Timme.

He made 39 per cent of his 3-point tries and had 14 games with at least two made threes, showing the kind of consistency sure to pull less-mobile bigs from the basket. And he has the ball-handling skills to take advantage – just look at his length-of-court, behind-the-back drive for a dunk against UCLA for proof – for unique shot-creating potential in such a long frame.

At the other end, Holmgren proved an elite rim protector, ranking fourth in Division I with 3.7 blocks per game.

Concerns: He needs to get stronger. He struggled at times with physical play and could use the added bulk for finishing through contact, too.

The 6’10 “, 220-lb freshman was a second-team All-American who helped the Auburn Tigers claim their first-ever No 1 ranking for the NCAA Tournament.

Strengths: The 19-year-old Smith is a rangy forward with potential to impact both ends of the floor. He averaged 16.9 points, 7.4 rebounds and 2.0 assists with ability to play in the post or step outside, where he shot 42 per cent from 3-point range with a quality jumper. He also made 79.9 per cent of his free throws to convert when drawing fouls. He also averaged 1.0 blocks and 1.1 steals with the versatility to chase multiple positions, making him ESPN’s No 2 overall prospect.

“I just see myself defending, affecting winning and just doing whatever a team needs me to do,” Smith said. “Spacing the floor, knocking down shots, running the floor, and just showing all assets to my game.”

Concerns: Smith shot just 42 per cent overall with heavy reliance on his jump shot, so he could use a bit more development with creating off the drive and improving his ball handling (1.9 turnovers per game) for easier looks.

The 6’10 “, 250-lb freshman was the Blue Devils’ focal point in a Final Four run under now-retired Hall of Fame coach Mike Krzyzewski.

Strengths: The 19-year-old Banchero averaged 17.2 points and 7.8 rebounds with the strength to tussle inside and mobility to roam the perimeter. Ranked as ESPN’s No 3 draft prospect, the AP third-team All-American was comfortable snatching down a rebound and leading the break. And his skillset proved particularly effective in being able to overpower smaller defenders, move around less-mobile bigs and score in the midrange with polish.

Banchero said Friday he feels he is “the best player in the draft, I feel like I showed that throughout the year.” Duke associate head coach Chris Carrawell said he thinks Banchero should be No 1 overall, too.

“For a non-guard at his size, he can create shots from the inside and out,” Carrawell said. “That’s rare.”

Concerns: Banchero shot just 33.8 per cent on 3-pointers, though he was better in the NCAA Tournament. He also had stretches when he could assert himself and impose his will even more, including going the final seven-and-a-half minutes of the Final Four loss to rival North Carolina with no baskets and only two shot attempts. Banchero also needs to improve defensive consistency.

Other potential names to watch:

– Keegan Murray (PF / C): The Iowa forward and first-team All-American will either go at No 4 or won’t be far behind. The 6’8 “, 225-lb Murray, who turns 22 in August, made a rapid rise from averaging 7.2 points as a freshman to 23.5 points and 8.7 rebounds while shooting 55.4 per cent overall and 39.8 per cent on 3-pointers. all-around development has made him ESPN‘s No 5 overall prospect at a loaded position.

– Bennedict Mathurin (SG / SF): The Pac-12 Player of the Year averaged 17.7 points in his sophomore season for Arizona on shooting splits of 45.0 per cent and 37.7 per cent from deep. He has been drawing strong reviews on the private workout trail, excelling in competitive action, individual drills and interview sessions at pretty much every stop thus far. He could vault into the top five, given his impressive upside at just 19 years old.

– Shaedon Sharpe (SG): The 6’6 “, 200-lb guard wasn’t a big name in high school basketball until the end of his career and then vaulted all the way to the No 1 overall spot in his class. He joined the Kentucky program mid-season and didn’t play any minutes. The first thing that stands out about Sharpe is his size. He’s got a very strong build with a lot of lower body strength and an overall very solid frame. He’s got ideal height for a wing with good length as well and strong scoring instincts which could see him break into the top five.

– Nikola Jovic (SF): It’s not just the similarity in name, there’s a similarity in game to the fellow Serb and back-to-back league MVP Nikola Jokic. The 6’10 “, 224-lb forward is listed as a small forward on a lot of draft boards because of his slighter frame and was voted top prospect in the ABA League after his first full season for Belgrade club Mega, which also produced Jokic . Again, like the MVP he’s a multi-faceted scorer with court vision and playmaking skills, averaging 11.7 points, 4.4 rebounds and 3.4 assists this season and shooting 36.5 per cent from 3-point range. He doesn’t possess an explosive first step. but that hasn’t harmed his compatriot, and he’s an intriguing prospect who will likely go in the lottery or soon after.

– Jeremy Sochan (PF): The 6’9 “, 230-lb freshman spent much of his childhood in Milton Keynes and offers defensive versatility and toughness in a developing game. The lottery prospect averaged 9.2 points and 6.4 rebounds for Baylor, and turned 19 only last month. Again, Sochan is likely to be picked in the lottery or soon after, given that he has plenty of skills which should translate to the league immediately.

– EJ Liddell (PF): The Ohio State junior has a strong frame (6’7 “, 243-lb) ready to handle physical play. The third-team All-American and two-time All-Big Ten team member averaged 19.4 points and 7.9 rebounds while shooting 49 per cent from the field and 37 per cent from 3-point range. He could be a lottery pick and should be taken in the first round.

– Jake LaRavia (PF): The 6’8 “, 227-lb junior made a quick impact at Wake Forest after transferring in following two years at Indiana State. He showed versatility while averaging 14.6 points and 6.6 rebounds and shooting 38 per cent from behind the arc as a potential first -round prospect.

Regardless of who the Orlando Magic selects, and barring a trade which would be a major surprise, this will be a decision which projects the franchise’s ceiling for the years to come.

It will also be an era-defining decision for a front office, headed by Weltman and GM John Hammond, which has made few missteps since taking command of team operations in 2017.

Most importantly though, it gives the Magic another chance to make a pick in the mold of O’Neal or Howard – both of whom were at the center of the two Orlando teams which made the NBA Finals in 1995 and 2009 – and catapult themselves back into the NBA’s elite.