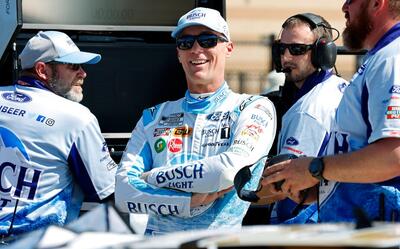 If you are looking for an action-packed way to consume sports on the weekend, NASCAR may be a great avenue to explore. Far from just driving in circles, some of the world’s best compete almost every weekend from February to November on tracks across America. NASCAR drivers are scored ultimately based on how they finish in the race, how many spots they advance from their starting position, and how many laps they finish and lead. Avoiding drivers who crash out of the race is a must, though!

numberFire is always your home for fantasy NASCAR advice. In addition to this helper, Jim Sannes takes a look at the best bets of the weekend in his betting guide. For driver picks and a full preview of the event, he also discussed this weekend’s race on the latest NASCAR episode of The Heat Check Daily Fantasy Podcast.

With all of this in mind, let’s preview the Ally 400 from Nashville Superspeedway on FanDuel.

I cannot stress enough the importance of practice in this next-gen car.

Daniel Suarez had never cracked the top-10 at Sonoma two weeks ago, but he posted 5th in single-lap practice speeds and qualified 8th. That speed was the only reason you’d have had an idea to roster the dominant driver of the afternoon.

However, this week, practice has been placed into an evening time slot. Qualifying will take place around midday on Saturday, which should be closer to the conditions we’ll see during the race.

I’m still willing to buy heavily into the results of both. This 1.33-mile oval is made entirely of concrete, so its closest comparison is likely Dover, but Dover has significantly more banking. Gateway – three weeks ago in St. Louis – probably has the closest shape, but it was very flat and made of asphalt.

There will be 300 laps in this event, and passing on a flatter, shorter oval has been brutally difficult this season. Kyle Larson led 264 laps here last season. Likely, we’ll need to find cars starting closer to the front with speed; many of them will likely stay there.

With 300 laps available, there are 30 FanDuel points for led laps. We’ve seen plenty of them congregate in the same small amounts of drivers on these short, flat ovals.

Ideally, I want to take three swipes at getting someone who can lead them in my lineup.

With passing more difficult, it’s more likely a mid-range type of driver finds an early track position and keeps it for a while. Plus, the punting tier this weekend is not bad at all. Two of the drivers below $ 5,500 led laps or finished inside the top-10 spots back in St. Louis. Louis.

The top end of the driver pool remains more open than in previous seasons. The aforementioned Larson had a significant advantage in speed last year that just isn’t present this campaign, and we saw that in St. Louis. The highest number of laps led by a driver was just 66 by Kyle Busch.

With more quality options to choose from, flatter exposures towards cars fast throughout the weekend can help you pinpoint the right one who is significantly less popular than a pair of drivers at the top-end of the driver pool are projected to be.

Below are my pre-qualifying rankings for each driver based on equipment, track history, recent form, and overall talent level – in that order. Only drivers with a win probability above 0% in Jim Sannes’ win simulations were included.

As a great indicator of overall speed, MLT Rank is the driver’s average median lap time ranking at the relevant sample of similar race tracks to this weekend’s. The prior races in the sample this week are:

For dominator viability, the driver is ranked 0-10 on a scale to potentially lead laps and win the race if they start upfront. A “10” is among the favorites to win the race, and a “0” has no realistic chance to lead the race at any point.

For flex play viability, the driver is ranked 0-10 on a scale to finish in terms of potential to finish inside the top 15 spots. These drivers will be better daily fantasy plays the further back in the field they start for optimal place-differential points.

Larson was a no-show in the middle of the pack at St. Louis and Phoenix in our relevant sample, and he spun out at Dover but did rally to finish 7th. Larson’s result last year came in an entirely different aerodynamic setup.

Busch was leading at Dover before an ill-timed late caution flag cost him his track position. He also led late at Gateway two weeks ago. Even with a relative dud in median lap time earlier this year in Phoenix (12th), KFB still leads all drivers in average median lap time ranking between these three circuits.

Elliott won at Dover, and he led 50 laps in Phoenix. He also led 185 laps at shorter, flatter Martinsville, which is still in this same family. His St. Louis result was a disappointment after early damage suffered from contact by Ross Chastain.

Chastain, himself, has finished second, third, and eighth in the three races in this sample. His eighth-place effort at St. Louis was arguably the most impressive of the three considering he had to navigate Denny Hamlin as a moving barracade most of the afternoon.

I’m a bit concerned about Hendrick Motorsports’ other two cars besides Larson and Elliott. That’s William Byron ($ 11,000) and Alex Bowman ($ 9,800). Both finished outside the top-12 spots and weren’t even top-20 cars in practice three weeks ago at St. Louis. If they’re slow in Nashville during practice, I’ll fade what is likely to be overwhelming chalk based on their pedigree.

Joey Logano ($ 10,500) and Ryan Blaney ($ 10,000) are two great reasons to pound the mid-range into lineups. Logano won at St. Louis after dominating practice and qualifying that weekend, and Blaney led a race-high 143 laps in Phoenix before showing well at Gateway, too. It should surprise no one if they contend for the win.

Quietly, this has become the best track type for Kevin Harvick ($ 8,300). Seemingly down on speed everywhere else, he’s sixth in average median lap time ranking for this weekend’s sample. Harvick finished sixth at Phoenix and ninth at Dover before crashing out late in St. Louis. Louis from a top-10 running position.

A surprisingly spicy lower mid-range tier is unfortunately headlined by Ricky Stenhouse Jr. ($ 7,000). NASCAR’s most frequent crash candidate has also been incredibly fast at this track type lately, including a second-place finish at Dover. He also finished sixth in Nashville last year.

Last year’s polesitter, Aric Almirola ($ 7,700), and Austin Cindric ($ 7,500) are alternatives if you have Stenhouse – justifiably – blacklisted at this point.

I also don’t mind Justin Haley ($ 5,000), who scored top-15 finishes at Dover and St. Louis. Michael McDowell ($ 4,000) is also worth a look considering he led 34 laps at Gateway, but he’s been qualifying too well to practically use given he is still a bit behind on speed.