Hello everybody and welcome! The 2022 MLB season is alive and well and that means our new friends over at PrizePicks have a TON of great props we can look to take advantage of.

PrizePicks is a great DFS props site where you can choose to select plays in terms of fantasy points or single stats. The goal is to build a 2-player, 3-player, 4-player, or 5-player entry and then select whether or not you want to play for the power play or the flex play. On the power play, you will need to be correct on each of your selections to win, and on the flex play, you will have a little more wiggle room for a chance to win some money back.

Our partners at PrizePicks offer some of the best, and easiest to win, MLB DFS games in the industry. There are no large-field tournaments filled with sharks where you have to get lucky just to place. At PrizePicks, you’re not playing against other people, you’re just playing against the projections, and the guys at PrizePicks have worked hard to give you really attractive opportunities to make some money. With promo code ‘BALLER’ you can get a 100% match on your deposit up to $ 100.

Featured Promo: Get any full-season NFL Premium Pass for 50% off and win big in 2022. Exclusive access to our Draft Kit, premium articles, rankings and projections, 15 lineup tools and Premium DFS tools and cheat sheets.
Sign Up Now!

PrizePicks has two types of games. The first type of game is known as Fantasy Score, which consists of selecting various players and trying to determine if they will go over or under their projected fantasy points in a game. The second game is known as Single Stat. For MLB, Single Stat consists of pitcher strikeout props in which you determine if the pitcher in question will go over or under their projected strikeout total. You can mix and match players from each type of game in your entry or select all of your plays from the same type of game. Once you have selected your players and props, you can choose the aforementioned flex play or power play option. Let’s see what the board offers today!

Tyler Mahle over 6.0 strikeouts – While Mahle has gone over this total just three times in 2022, he has gone over it in two of his previous three starts and is fresh off a 10-strikeout game against these same Diamondbacks. Arizona has posted the seventh-worst K rate vs. right-handers over the previous two weeks with a rate of 24.3% while also posting just an 82 wRC + mark over that same span.

Logan Gilbert over 5.5 strikeouts – Gilbert has a pretty solid matchup in this one and has eclipsed this total in four of his previous seven starts. The Twins have posted the sixth-worst K rate vs. right-handers over the previous two weeks with a rate of 24.5%. The scary part here is their 139 wRC + over the same span, however, they are posting an 8.4% walk rate, so as long as Gilbert can limit the walks he should be able to get deep enough in this one.

Tony Gonsolin over 5.5 strikeouts – This is probably my favorite prop of the evening as the Angels are currently posting the worst K rate against right-handers over the previous two weeks with a rate of 28.5% while also posting just an 85 wRC + mark. Meanwhile, Gonsolin has gone at least six innings pitched in each of his previous five starts while also eclipsing this total in three of those five starts and barely missing it in the other two starts.

Trey Mancini over 0.5 runs + RBI – This appears to be a solid spot for Mancini to either score a run or knock on in. Currently, the Orioles as a team are posting a 144 wRC + against left-handed pitching, which ranks fifth-best in the league over the previous two weeks. Meanwhile, Yusei Kikuchi has posted a 1.70 WHIP and 4.20 ERA while allowing four home runs to right-handed hitters. Mancini has also posted a .760 OPS vs. lefties this season and will almost certainly be in the thick of the lineup this evening.

Other Recommendations: Nick Pivetta over 6.0 strikeouts, Chris Bassitt over 5.5 strikeouts 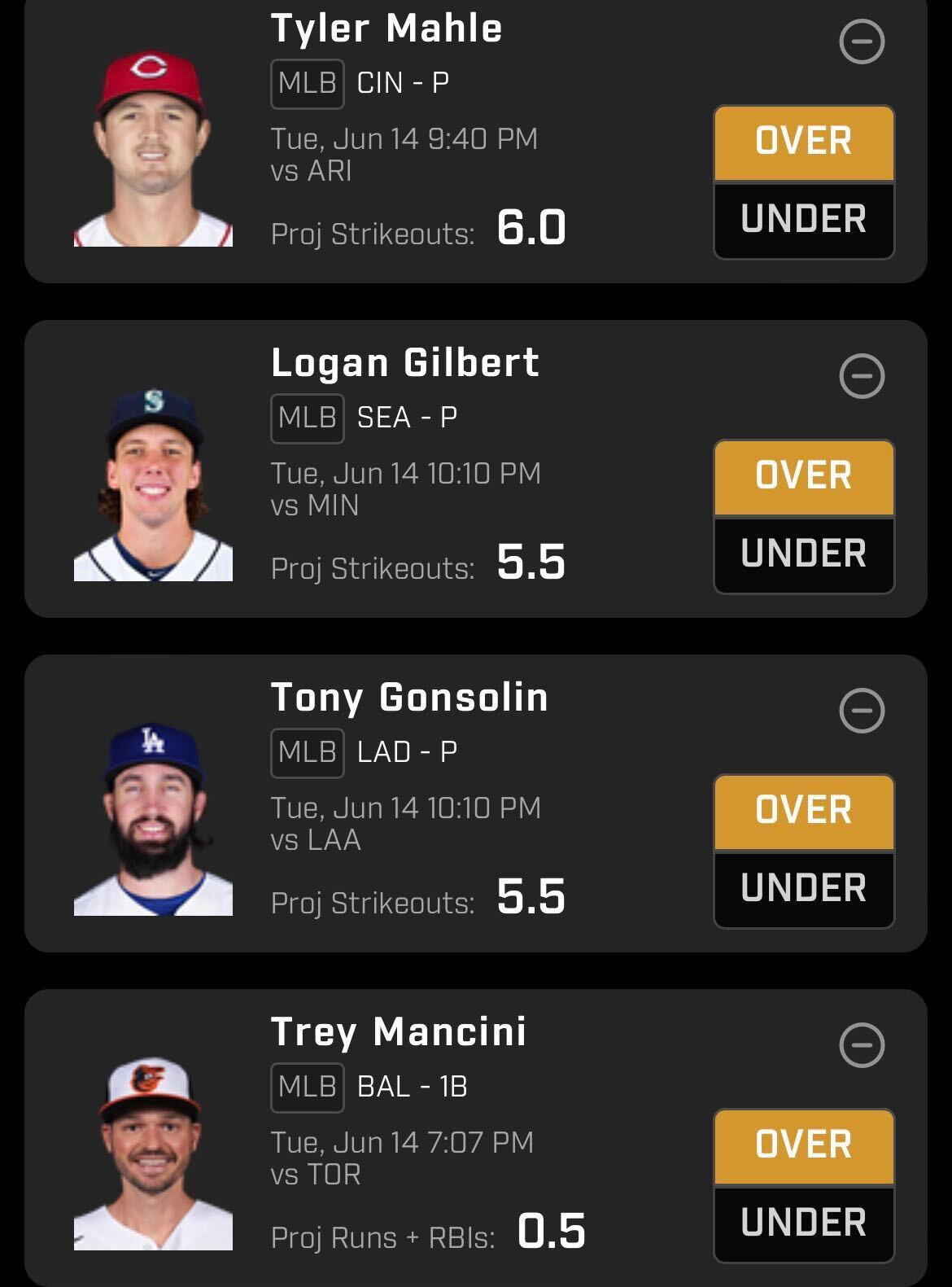