Meghan Markle today revealed she took the UK’s citizenship test after meeting Prince Harry, who she claims had ‘no idea’ about some of the answers.

The Duchess of Sussex’s star guest on her new Spotify podcast is First Lady of Canada Sophie Trudeau. The friends spoke about the challenges of parenting and being a partner to two famous men in an episode called: ‘Good Wife/Bad Wife, Good Mom/Bad Mom’.

But she also spoke to comedian Pamela Adlon, best known as the voice of Bobby Hill in the animated comedy series King of the Hill, who became a British citizen in 2020.

Meghan then revealed that she took the ‘Life in the UK’ test ‘a couple of years ago’, although LA born and based Ms Markle is not believed to be a British Citizen, having reportedly ‘abandoned’ the idea after Megxit. Experts said that she did not live in the UK for the three years required.

She said: ‘I was studying for it and I remember going: ‘Oh my goodness’. I would ask my husband: ‘Did you know this? Do you know this?’ And he would say: ‘I had no idea’. 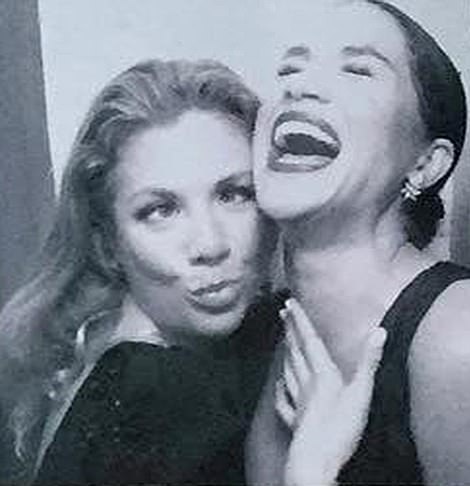 Meghan Markle’s star guest on her new Spotify podcast is First Lady of Canada Sophie Trudeau. Pictured together in a photo booth in 2016 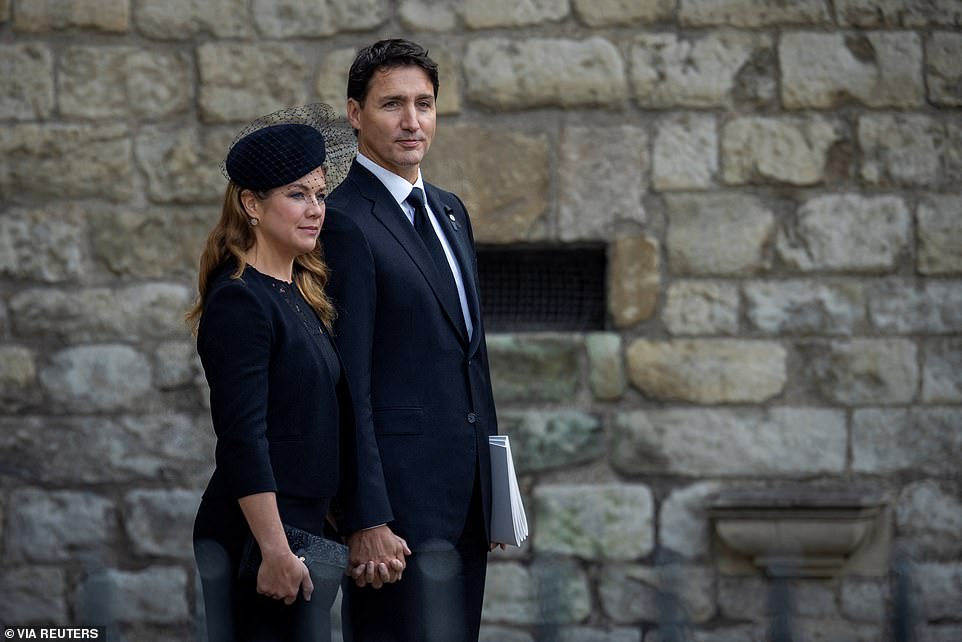 Sophie Trudeau attended the funeral of the Queen with her husband, Canadian Prime Minister Justin Trudeau, on September 19, pictured. Meghan described her as a friend

Introducing her friend Mrs Trudeau, Meghan calls her a ‘humanitarian mother’ whom she met in Toronto at the city’s fashion week around seven years ago, when she was starring in Suits.

She said: ‘Sophie has become a dear friend and someone who I think is so emblematic of strength that comes from embracing your humanity, even in the face of all these family and home and public pressures, keeping that sense of self while holding up the mantle of what comes with being a parent and a spouse, that’s a full plate’.

They posed together cheek-to-cheek on a Toronto rooftop bar in 2016 at the exclusive Soho House. And it was Mrs Trudeau’s husband, who has been Canada’s PM since 2015, who urged his country to welcome the Sussexes after they emigrated from the UK. They would later move to LA.

Opening the podcast, Meghan describes a day of laughter and fun at her Montecito mansion with Mrs Trudeau. Their children played in the swimming pool on pizza-shaped floats while they drank wine ‘on the terrace’ and were ‘giddy like absolute schoolgirls.’

Meghan said: ‘This wasn’t our day of being the wives and mothers, all perfectly quaffed with updos and pearls and demure smiles.

‘This was the other version of us both with wild curly hair and swimsuits and loose linen and huge belly laughs. Big cuddles with our little ones, quiet whispers of girl talk on the terrace, giddy like absolute schoolgirls. We were just having so much fun.’

The Duke, 35, and Duchess of Sussex, 39, bought the sprawling nine-bedroom and 16-bathroom mansion (pictured) in upscale Montecito, Santa Barbara, for $14.65 million. It appears they and the Trudeaus enjoyed some recent pool time when the two mothers were ‘giddy like schoolgirls’

Meghan went on to reveal that she was talking about an event with Sophie, whom she has known for a number of years before joining the royal family.

Elsewhere, she described how she had ‘gone to Sophie for advice’ over the years, after meeting ‘seven years ago.’

According to Finding Freedom, Meghan became friendly with the First Lady in 2016.

Meghan had previously met her husband Justin Trudeau at the One Young World summit in Ottawa that year, with the pair pictured deep in conversation.

‘Sophie had given up a career in television, where she had been working as a correspondent on CTV’s eTalk, to take on a more formal role alongside her husband as he hit the campaign trail,’ the authors claim.

‘The pair became fast email friends, Meghan was interested to hear how Sophie had successfully made the move from an entertainment news correspondent to the much-beloved First Lady, all while skillfully dodging controversy.’

A close friend of Trudeau and a former cabinet member told Scobie and Durand: ‘Sophie would have made it clear that every single aspect of Meghan’s past would be dug up, so the most important thing was to be honest with Harry—tell him everything.

‘Sophie’s a smart woman and the perfect brain for Meghan to pick. She knows how difficult something like this is. Few people can relate or truly sympathize. For those of us who knew about their friendship, it was amazing to see the change in Meghan that followed.’

Earlier that year Meghan and Sophie were pictured in a series of photobooth images with Jessica taken at the Canadian Arts & Fashion Awards (CAFA) at Soho House in Toronto – where Meghan lived while filming Suits.

Back in January 2020 there was speculation that Justin Trudeau may have given a cryptic Twitter clue about Meghan and Harry’s departure from the Royal Family.

Diplomatic sources claimed Mr Trudeau and his wife Sophie were consulted about the decision late last year, before members of the Royal Family and even the Queen.

Prince Harry and Mr Trudeau have always looked to enjoy each other’s company at events such as Commonwealth commemorations. The two have also encountered each other on multiple occasions through Harry’s Invictus Games for disabled servicemen.

Meghan also shared a glimpse of her morning routine on her podcast Archetypes.

Speaking to her guest, American actress Pamela Adlon, the Duchess of Sussex, 41, revealed what mornings are like for her and Prince Harry in their Montecito home.

Describing her ‘morning rush,’ Meghan revealed how she and Prince Harry start the day by looking after their children, Archie, three and Lilibet, one. 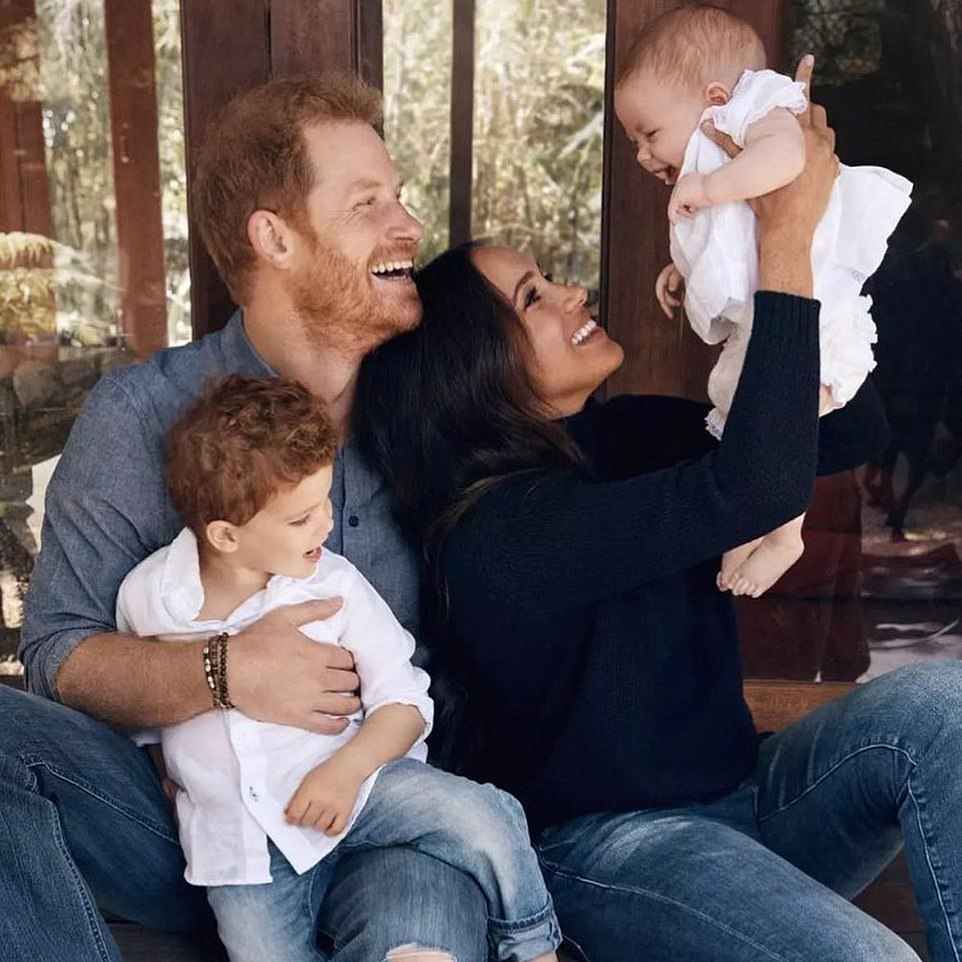 Speaking to her guest First Lady of Canada Sophie Trudeau, whom she describes as a close friend, the Duchess of Sussex, 41, revealed what mornings where like for her and Prince Harry in their Montecito home, where they care for their son Archie, three and daughter Lilibet, who is 17 months old 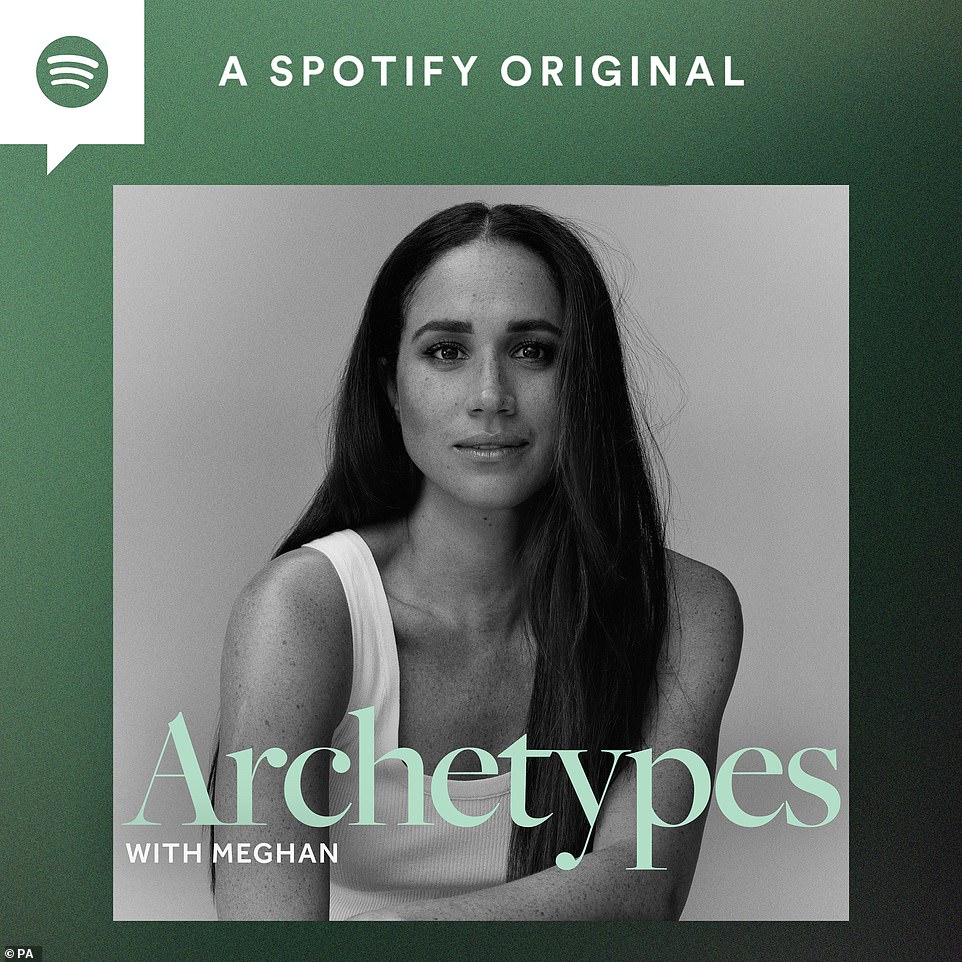 ‘So the morning rush I’m sure it’ll only get more chaotic as they get older,’ Meghan said.

‘But for me, it’s, you know, both monitors on for the kids to hear them, always up with Lily, get her downstairs, then half an hour later Archie’s up,’ she said.

She went on to say she started[s] doing his lunch box right before he’s up while I have her, getting her a little nibble, my husband’s help me get him downstairs. I make breakfast for all three of them. It’s very important to me. I love doing it.

‘For me it’s just feels like the greatest way to start the morning,’ she added, as Sophie cooed it was ‘so sweet’.

After breakfast, the mother-of-two moves to feed the family’s dogs, and revealed Harry and her recently got a third pet.

‘And then it’s like feeding all three of the dogs – because we just got another dog – and then it’s getting Archie out the door for school and, you know, but it does, it feels like a whirlwind,’ she said.

Pamela then said she hopes Prince Harry contributes to this demanding morning routine and ‘kid time.’

‘Also, I hope dad is being a good contributor to like the time the kid time,’ she said.

To which Meghan replied ‘Oh my husband? He’s great.’