The NHL preseason kicks off on September 24. Check back here for NHL scores and more information throughout the 2022-23 season. You can also find a plethora of stats about the greatest scorers and offensive showcases in NHL history below.

What is the highest NHL score ever?

The late 1970s and early 80s offered up some of the highest-scoring games in the NHL’s storied history.

Two games are tied for the top spot when it comes to the most defensive and goaltending deficient matchups in league history. The first came in February of 1977 when the Toronto Maple Leafs beat the Chicago Blackhawks 10-8 in a game that saw half of the points scored in the final period.

Related: NHL games today – Get watch times for the first round of preseason matchups

The Quebec City Nordiques — or the current Colorado Avalanche — and the Washington Capitals matched that total in the same month, but in 1981 when the Canadian squad beat the Capitals 11-8.

How many goals did Wayne Gretzky score in the NHL?

Wayne Gretzky is arguably the greatest athlete to ever lace up skates and put a hockey stick on a puck. During his legendary run in the sport that included stints with the Edmonton Oilers, Los Angeles Kings, St. Louis Blues, and New York Rangers, the hockey icon scored an amazing 894 goals.

However, what makes “The Great One,” well, so great is the fact that he was just as good a passer as he was a scorer. The Canadian sports icon also earned 1,963 assists, which helped bring his career points total to an absurd 2,857.

Who has scored the most goals in the NHL?

Wayne Gretzky isn’t called “The Great One” for no reason. He truly was the best player to ever do it. Some might debate how good he was as a defensive player, and he wasn’t known as the most physical player on the ice during his day, but the stats don’t lie about his brilliance as a player.

Gretzky’s 894 career goals are the most ever in league history. It is over 100 more goals than the second-place player, Jaromir Jagr, and his 766. The Edmonton Oilers great also has the most assists and points in NHL history as well.

How many NHL players have scored 500 goals?

In total, 46 players in NHL history have reached the legendary 500 goals mark during their tenures in the league. Many on the list are current Hall-of-Famers, including Mark Messier, Phil Esposito, and Steve Yzerman.

Pittsburgh Penguins legend Sidney Crosby and Capitals great Alex Ovechkin are two of the few players in the 500-club who are still active in the league.

Who is the first NHL goalie to score a goal?

Goalies are an important part of any NHL roster. They are the players that can single-handedly take over a game and carry a team on their back to the finals and even NHL championships. There are many athletes like Patrick Roy, Dominik Hasek, and Henrik Lundqvist that will go down as some of the greatest net minders of all time.

However, few of the goalie greats have achieved the holy grail of net minders and actually scored a goal. Yet, only one man can actually lay claim to the historic moment of being the first goaltender to actually get credited with scoring a goal on the opposing team. 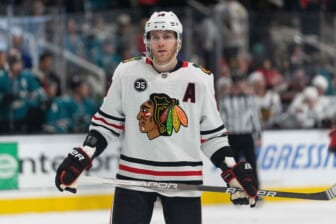 In November of 1979, New York Islanders great Billy Smith made history when he was the first goalie credited with a score in a game against the then-Colorado Rockies. One-time Philadelphia Flyers star Ron Hextall was the second man to achieve the feat and the first to do it off of an actual shot.