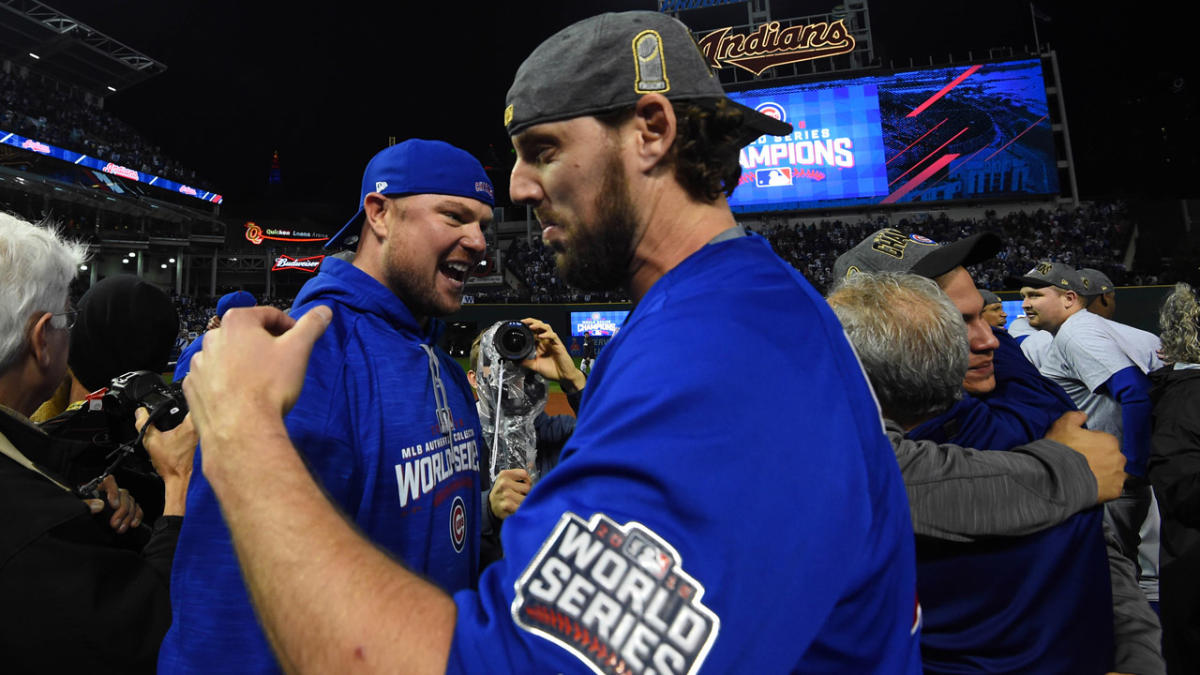 Maybe it has been that long since the Cubs won the World Series.

Not only is everybody gone from that team except rehabbing right-hander Kyle Hendricks (not counting backup-catcher-turned-manager David Ross).

But six years and 18 days after Game 7, players from that team are starting to show up on Hall of Fame ballots.

Well, one player. And, for what it’s worth, a Cleveland opponent from that 2016 World Series who has since become the Cubs’ first-base coach.

They are among 14 newcomers on the 2023 ballot revealed Monday.

Certainly, both would be first-ballot, post-title-celebration Hall of Famers.

But they’re more likely to fall short of the 5 percent necessary to remain on this ballot for a second year — to take nothing away from their impressive careers.

A more interesting question when it comes to Lackey, the first 2016 Cub to appear on a ballot, and that 2016 Cubs team is this one:

How many of those players might ever get elected to the Hall of Fame? Any of them?

In the immediate afterglow of that championship, it was unthinkable to suggest that at least two or three from that historically young World Series core wouldn’t be serious candidates by the time their careers ended — and presumably with another ring or two each.

But the fact it’s now a question whether any of them will is just one more reminder of how far that team fell since then, collectively and, in many cases, individually.

In fact, how that question eventually gets answered could wind up being one more way that the most-celebrated Cubs team makes history.

Unless Jimmy Rollins gets some suddenly increased love from the writers in the next few years or eventually by a veterans committee, the 2008 Phillies might be the last World Series champion without a Hall of Famer — assuming projections for those awaiting eligibility hold up.

You have to go back to the 2002 wild-card Angels in Lackey’s rookie year and the 1997 store-bought, wild-card mercenaries from Miami to find the previous two.

Even the 2005 White Sox still had Frank Thomas around, and the 1988 underdog Dodgers had Don Sutton most of that season.

But here’s the truly history-making potential, if none of those Cubs reach the Hall of Fame: No team in major-league history that has won 100 games and gone on to win the World Series has ever done that without a Hall of Fame player .

Whether that speaks to this decade-long era of tanking that boosts the best teams’ records these days (and tends to make more players available to those teams), it does speak to at least a few heartbreaks and unfulfilled promises since that glorious, rainy night in Cleveland six years ago.

But what are the chances one of those 2016 champs yet breaks through and earns a place in Cooperstown? More than a dozen in addition to Lackey look at this point like they have good shots to at least land on ballots when they’re done playing.

A look at the seven we think have at least a long (in most cases very long) shot at making it one day:

The top free agent signing in Cubs history, Lester was a workhorse during his career, with eight 200-inning seasons and three top-4 Cy Young finishes. His frontline role in helping the Cubs end a 108-year championship drought adds an intangible (tangible?) boost to what many might consider a borderline candidacy, underscored by his 2016 NLCS co-MVP honor and his epic relief appearance in Game 7 of the World Series — three nights after pitching six innings to beat Cleveland in a must-win Game 5. He’s the one guy on this list who has officially retired.

RELATED: Why Jon Lester has a compelling Hall of Fame case

Bryant has the statistical foundation and job security (six more years on his Rockies contract) — if not the age advantage — to have the best chance at making the strongest case among the position-player core. But heading into his age 31 season, he’s coming off another season lost to injury and has a lot of ground to make up. The most obvious factor in his favor is Coors Field as a home ballpark, which, if he can stay healthy, could help him put up some big numbers over the next few years. And because of his early career accomplishments, the anti-Coors bias should not affect him, regardless of what the eventual home splits look like.

RELATED: Wittenmyer: Why Bryant might get Hall pass with Rox deal

You can make the case that the best thing to happen to Schwarber in his career was getting non-tendered by the cost-cutting Cubs after the 2020 season — with two All-Star selections, two playoff appearances, a home run title and a National League pennant to show for it since. It’s a post-Cubs pace he has to keep up heading into his age-30 season and the second year of a four-year deal with the Phillies. His postseason exploits are already on his side, and with the extreme infield shifts now banned, his pull-hitting slug might favor him more than at any time in his career.

Contreras’ next landing spot could be a key to his chances as the most motivated free agent on the market. If it’s a competitive team with the depth luxury of allowing him to rotate through the DH spot to help keep his bat fresh and production up, he has a chance to add to those three starting nods in the last four All-Star games — and improve his resume. Another ring or two as a starting postseason catcher won’t hurt the cause. But health will be bigger than ever for him as he turns 31 in May.

The biggest thing in his favor is his relative youth. Believe it or not, he’s still in his 20s (at least, until next week). The other biggest thing: His enormous talent. That’s the wild card as the elite defensive player with enough offensive firepower to earn a runner-up finish in 2018 MVP voting. If he settles into, say, a five-year run of maximizing that potential, he could fight his way into the conversation. It’s a big “if.” Especially in a place like Detroit.

It’s the 103 mph gas and big-stage performance in two of the game’s biggest markets that lend an air of plausibility to his bubble candidacy. He barely qualifies as a Cub in this regard because he spent only three months with the team after a deadline trade from the Yankees, and his postseason contribution was a rollicking ride marked by dominance, overuse and rain-delay tears in Game 7. As a 34-year-old free agent in apparent decline, he has significant work to do and might need even more significant luck.

The oldest position player of the bunch at 33, Rizzo needs a lot of good health and better production over what’s left of the back nine of his career — not to mention a few more of those two-year Yankees extensions that keep him in proximity of that short porch right in the Bronx. The wild card for him, like Schwarber, could be the shift going away, if it adds the 15-20 hits a year to the pull hitter’s numbers and keeps him productive into his mid- to late 30s. Still a very long way to go.