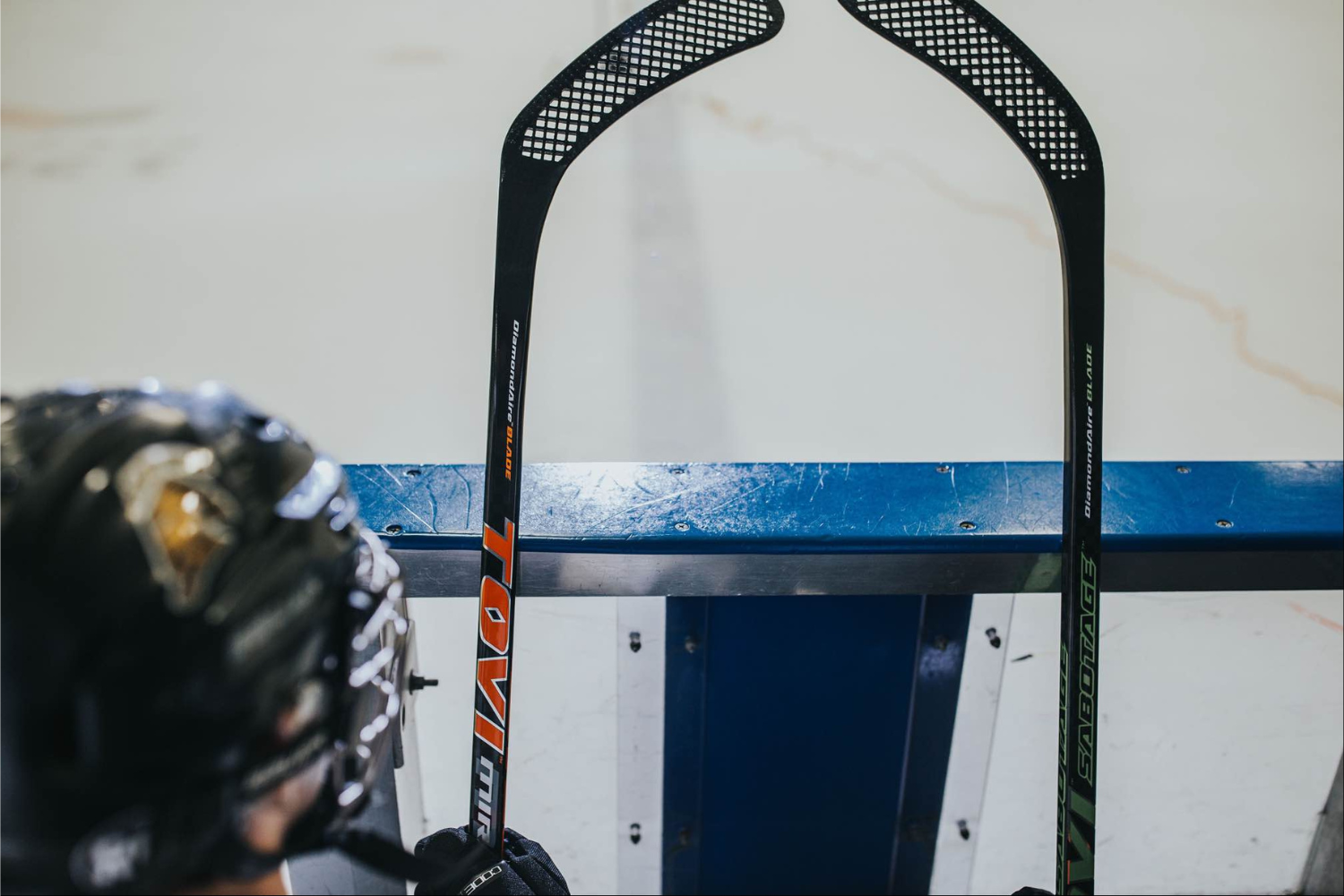 Bradley Rangell spent decades in the banking industry advising sports owners, brokering mergers and acquisitions and financing franchise sales. Through that time at Lehman Brothers, Citibank and his own shop, Iron Clad Sports, Rangell developed an enviable network of high-ranking executives so when he invested in Tovi Hockey, a small stick-making startup, he arranged a meeting with former NBA commissioner David Stern.

This was in late 2019, and the founding team at Tovi were presenting to an analyst at the office of Micromanagement Ventures—the investment firm co-founded by Stern and John Kosner—when Stern himself walked by the conference room’s large glass window. Aaron Krause, a Tovi board member best known as the inventor of the Scrub Daddy sponge, waved one of Tovi’s patented, fully carbon-fiber sticks.

A few minutes later, Stern entered the room, kicked his feet on the table and said, “This, I gotta see.”

Krause launched into his full Shark Tank-style pitch, only for Stern to interrupt him halfway through the presentation.

“Enough, enough, I’ve heard enough,” Stern said. “It’s the greatest damn stick in the world. Is it approved by the NHL?” 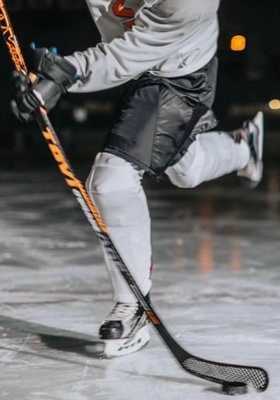 The Tovi stick is designed to help players increase their swing speed with perforated construction that allows air to flow freely through the blade.

It wasn’t. Tovi was hoping to secure the backing of a player or team before seeking approval, at which point Stern himself vowed to call an old friend, who also just so happened to be NHL commissioner Gary Bettman.

Tragically, Stern suffered from a brain aneurysm and died a few weeks later, but Bettman’s assistant followed up a month later, saying that Stern had called over to the league office a few times and that Bettman still wanted to take the meeting.

“David was not interested, necessarily, in investing in sports equipment, but he liked the presentation and was a guy who liked to help other people,” Kosner recalls. “He’d roll up his sleeves. I mean, he would offer some free abuse as part of the thing, but he was engaged and volunteered to contact Gary.”

That presentation with Bettman went favorably, and after a pandemic-induced delay, the NHL began its testing process, culminating in conditional clearance for Tovi Hockey sticks to be used in league games and practices as of March 2021. It has received endorsements from several notable retired hockey players, including Mark Recchi, Frank Simonetti, Rick Middleton, Mike Eruzione, Craig Janney and Ken Linsman.

“We believe it is likely NHL players will be using our sticks this season,” says Tovi COO Richard Fucillo.

Earlier this week, Tovi acquired Raven Hockey, which specializes in youth sticks built more appropriately for younger players. The combination of technology and distribution channels will result in the release of the Tovi Raven Pro Series youth stick line, just as Tovi is also announcing a new pro-caliber sticks: the Mirage and Sabotage Pro v3.

The SABOTAGE is available in the popular mid-kick format, which is excellent for generating accuracy and power from handle to blade with laser-like accuracy. 🔥🔥🔥🏒🏒🏒

“For 20 years since the carbon fiber stick came into the market, all those makers basically make the same stick just a little bit lighter every year, but they haven’t changed anything in it,” says Tovi Hockey CEO Tovi Avnery, an engineer by trade who collaborated with material scientist Scott Heitmann on the design.

Tovi sticks are the only ones to be 100% carbon fiber, and its DiamondAire blade is created with a novel compression molding process. It also has a series of holes in it, improving aerodynamics while not managing not to weaken its force potential. “By getting rid of the foam core, and by putting holes in it, that allows us the stick to flow better as you move it around,” Avnery adds. Rangell adds that players generally see a 15% improvement in release time as a result.

“Yes, the players shoot a little bit faster as well, but this [release time] is a very, very big development because you’re able to change direction of the puck and get it to the net reasonably quicker,” Rangell says.

The stick also includes a micro-grip technology on the blade and the company makes what it calls “liquid tape” to be applied before use—these innovations replace the standard hockey practice of taping and waxing, enhancing the feel and consistency of one’s stick handling . “When you put a tape on, every time you put it on, there’s no way you can put it on the same way,” Avnery says. “So every time you put it on, you’re going to get a different performance.”

Headquartered in Boston and manufactured in New Hampshire, Tovi has only raised money from friends and family angel investors to date, but Rangell says they’ll start raising outside capital to help scale the company as it grows into the retail space. A partnership with a major distributor in the US is imminent.

The original conceit for the stick came following Avnery’s sale of his previous startup, Advanced Electron Beams. He was enjoying a cold beer in the kitchen of one of his AEB investors, Fucillo, sitting at the table where Fucillo’s son had left his football helmet. Brainstorming a next venture, they first sought to build a more protective helmet, but the carbon fiber material they and Heitmann considered was too dense and would have been too injurious. Their next idea, a baseball bat, was also nixed because it would have generated such exit velocities to be dangerous to the pitcher and infielders. 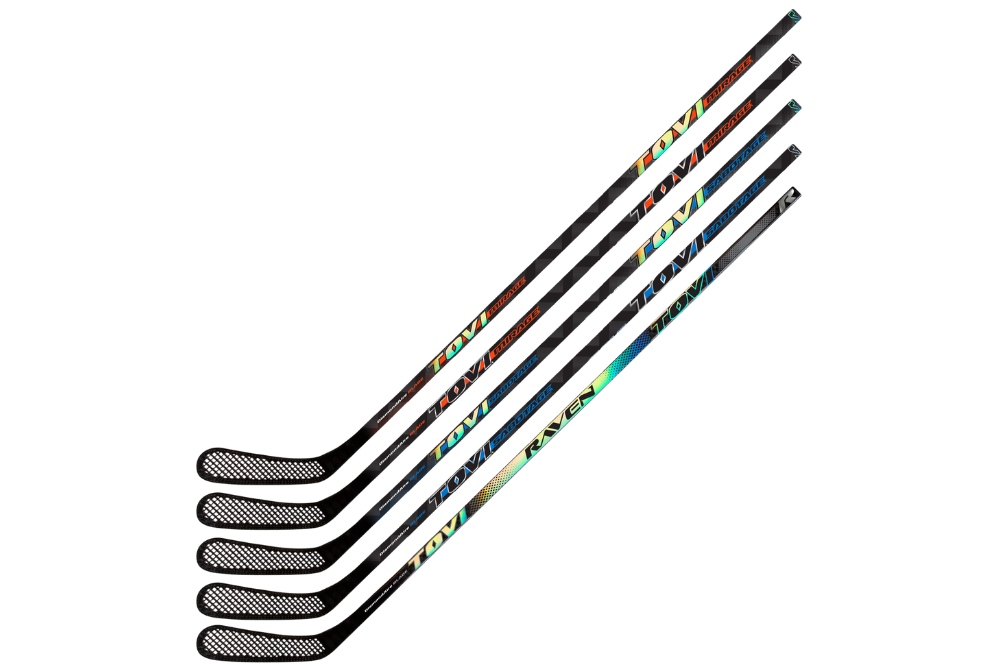 Tovi is the first hockey stick to be manufactured with 100% solid carbon fiber.

After switching their attention to hockey sticks, the process took four years to settle on the right materials and construction. As the Tovi stick started to gain traction, one of Krause’s c-suite executives introduced him. Krause is an ardent hockey fan, a Level 4 certified USA Hockey coach and the father of a talented junior player. He even built a full-sized rink in the back of his house.

Krause had tossed the stick in the trunk of his car but hadn’t planned on using it until his own stick broke while coaching a practice. He retrieved the Tovi stick and was surprised by how much he enjoyed the feeling. Krause’s slapshot suddenly got faster.

“And I was like, ‘Wow, what is this thing?'” Krause says. “I spent the rest of practice trying to break it, and I couldn’t even put a dent in it.”

His own son, Bryce, was a quick beneficiary. Bryce Krause had goal scoring skills in and around the net but lacked a slapshot. In the very first game that Bryce tried a Tovi stick, he ripped a shot from inside the blue line that went over the goalie’s shoulder.

When he returned to the bench, Aaron said, “Bryce, was that you?”

Aaron countered, “No, it wasn’t. It was the stick.”

How I began my hard shot…

That birthed a running gag between the two—”It was the stick”—which has continued as Bryce’s hockey career continues through the youth ranks. “That has become something that we say all the time now as he becomes one of the top scorers in every team he’s on, and his slapshot is the fastest thing that you’ve ever seen,” Aaron Krause says.

Bryce, who is also a prolific TikToker, says the Tovi stick was a “very big change” from the one he used to use. “The stick has helped me so much to increase my power on shots,” he says, “and the accuracy is good for me too.”