What we are looking for in a hitter, despite all of the advanced and complex numbers, is pretty simple. We want a hitter to hit the ball very hard, and we want them to hit the ball on a high percentage of their swings.

This is the best formula for success in the Majors Leagues – to make contact with the ball and for that contact to be as hard contact as often as possible. The data on this is very accessible, and we’ll dive into it in this piece.

We see so often that a hitter will do one or the other without the ability to do both. To showcase this, here are two archetypes.

Editor’s Note: Our incredible team of writers received five total writing awards and 13 award nominations by the Fantasy Sports Writers Association, tops in the industry! Congrats to all the award winners and nominees including Best MLB Series, NFL Series, NBA Writer, PGA Writer and Player Notes writer of the year. Be sure to follow their analysis, rankings and advice all year long, and win big with RotoBaller!
Read More!

The player who swings out of his shoes trying to hit homers. This season, Wisdom is top-10 in hard-hit rate, with 53% of his batted balls leaving the bat above 95 miles per hour. However, he only makes contact on 65% of his swings – a number that is bottom-10 in the league. These two numbers are related.

Wisdom swings the bat so hard that he gives up (intentionally, most likely) lots of bat control to make louder contact when it does happen. Not only that, but the fact that he’s swinging the bat harder than most players makes it so his bat is in the “hitting zone” for a shorter period giving it fewer milliseconds to make contact with the moving ball. The harder you swing, the less likely you are to contact the ball just by definition.

The opposite of Wisdom, Kwan is leading the league in contact rate, putting the bat on the ball on 93% of his swings. However, only 25% of his batted balls are hit above 95 miles per hour, the seventh-lowest number in the league. Kwan has great hand-eye coordination, of course, but he’s also just giving his bat more time to contact the ball given how slow the bat is moving through the hitting zone.

Here are these two players highlighted on the scatter plot of contact rate vs. hard-hit rate, with a trend line showing the inverse relationship between the two. 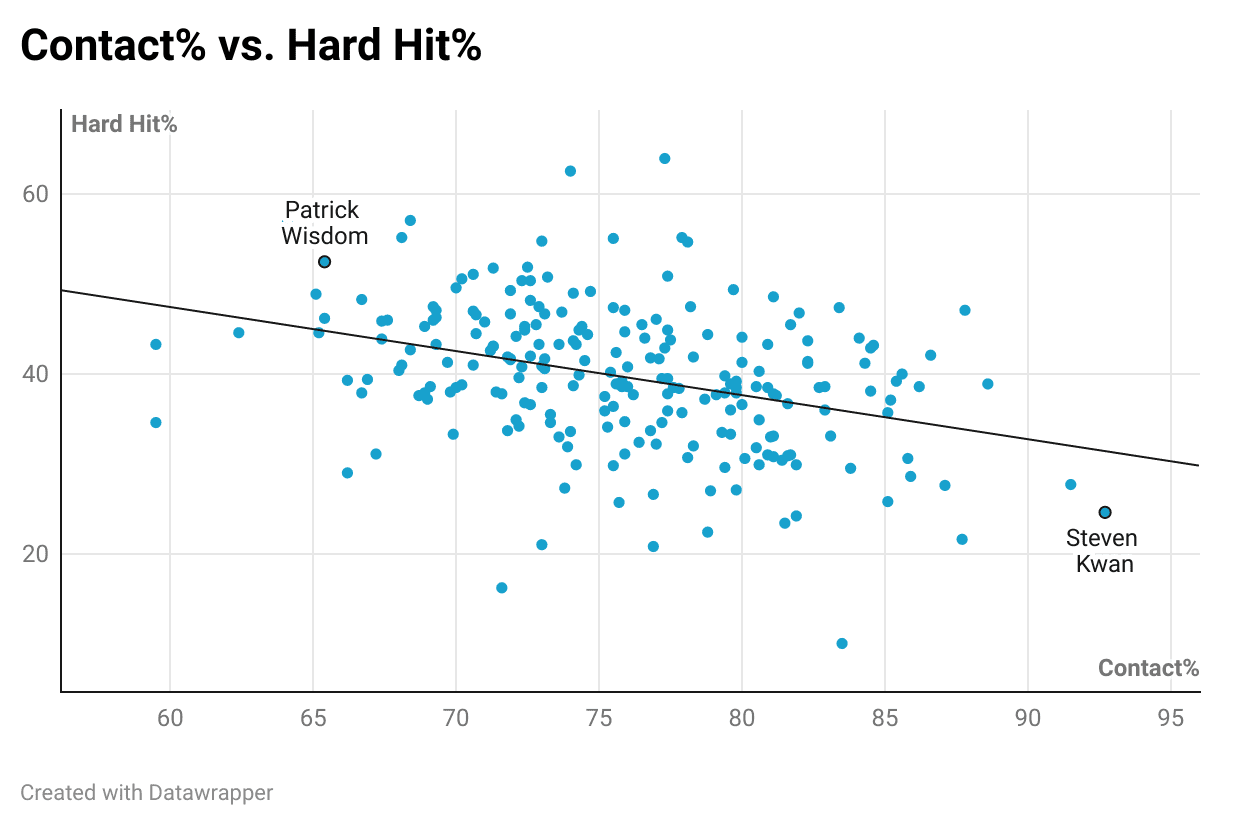 The next step in our quest is to highlight more dots in that above plot, searching for hitters who are putting up strong numbers in both of these two categories. Let’s get into that, but first, here is an idea of ​​what is good and what is bad in the statistical categories we’re talking about. Below you will find the averages, maximums, and minimums for our stats. I’m also adding on “very hard hit” here, which are balls hit above one hundred miles per hour.

We are looking for hitters that are in the top 25% in both categories, and there aren’t many of them. If I highlight all of their names on the plot, it gets really ugly because the dots are so close to each other, so I drew a little box to highlight who we’re talking about here. 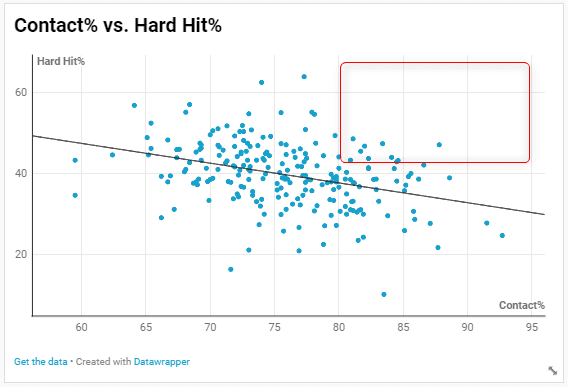 Here are those names in table form:

No huge surprise to see Betts and Smith on here, the other three names are a bit surprising.

Drury: He’s been at this all year. Drury hit two homers with a 20% barrel rate and a 60% hard-hit rate in April while managing strikeouts at 20% and making contact 76.5% of the time. I really suspected that he had just dedicated himself to hitting homers this year, and the nice contact rate would not keep up. Well, I was wrong. Over the last month of play, Drury has gone for an 83% contact rate and a 46% hard-hit rate.

Brantley: We knew Brantley would be near the top of the list in contact rate this year, but the hard-hit rate is a pleasant surprise. Despite the 47% hard-hit rate here, he’s hit just four homers. His 45% ground-ball rate keeps balls out of the stands, and he rarely goes much above 95 miles per hour (a below-average 25% very-hard-hit rate). We should just expect more of the same from Brantley – tons of hits but not many homers.

Vaughn: He was one of the best hitters in the league in April, but then missed a couple of weeks due to injury, and has been more good than great since then. In those 108 plate appearances, he has a pretty mediocre 41% hard-hit rate and a straight-up bad 3.8% barrel rate – although his high contact rate has kept the batting average way up at .286. I think there’s more pop coming for Vaughn, but his stature in this post can be credited to the hot start to April he had.

If we loosen up the criteria a little bit to a 78% contact rate and a 43% hard-hit rate, here are the hitters we had on the list:

The most interesting name to me here is Ke’Bryan Hayes, who has made a ton of contact this year (21.3% K%), and he’s been no stranger to loud contact either (7.1% Brl%). Despite all of this, he has just two homers in his 230 plate appearances. The ground-ball rate is higher than average (46%) but not absurdly bad, so it seems like he should have more than just a pair of homers.

The expected home runs count from his Statcast page says four, so that does back up our idea here – although four still isn’t helping your fantasy team much over the course of two months. Hayes should be started for his batting average anyways, and there very well could be double-digit homers for him the rest of the season.

The rest of those names aren’t all that interesting, but there’s some upside there – and plenty of those names are available in your league (although Segura is on the shelf for quite a while so you can ignore him from that list).

If we just look for hitters putting up numbers that are above-average in both categories, the list gets quite long. Here’s a full table for your viewing pleasure:

Here is the full, interactive version of the scatter plot from early on in this post, you can hover over each dot to see who it represents:

One last thing, I went ahead and looked for all hitters with a contact rate above 77% and a very-hard hit rate (100+ mph) in the top 25% of the league, sorted by very hard hit rate.

We have some very interesting names here. You can see how high above the rest of the field Joc Pederson is there, he’s had such an impressive year. We also see some guys hitting the ball very hard but without the good homer counts thanks to their launch angle profile (those names here are Christian Yelich, Max Kepler, and Ketel Marte). These hitters all have plenty of upside and deserve a look if they’re available in your league and you’re looking for power numbers.

Thanks for being here – that’s all I’ve got!