Space Forge is on a mission to make space work for humanity by harnessing the power of microgravity; offering an on demand service to advance the expansion of the in-space manufacturing market for the research and production of new super materials that aim to tackle some of the biggest problems faced by modern society.

To enable this service they are developing a world-first service incorporating both launch and return of a new small class of vehicle – the ForgeStar.™ – that can be deployed from conventional launchers to provide rapid, reliable and reusable in-space infrastructure.

Working with the Virgin Orbit team at Spaceport Cornwall, Space Forge has now integrated their ForgeStar-0 satellite into Virgin Orbit’s launch system. The ForgeStar-0, which is the first satellite designed and built in Wales, will be launched on Virgin Orbit’s Start Me Up launch later this year.

This launch will test the deployment of Space Forges’ proprietary re-entry shield, which during future operational missions will protect a satellite traveling through the heat of the atmospheric re-entry, targeting small landing zones off the coast of the UK and other countries.

Space Forge’s inaugural voyage into Low Earth Orbit has been given the mission name: Genir Seren, a Welsh phrase meaning “A New Star”. A nod to their Welsh home, this commemorates the first in what will become a fleet of ForgeStars. 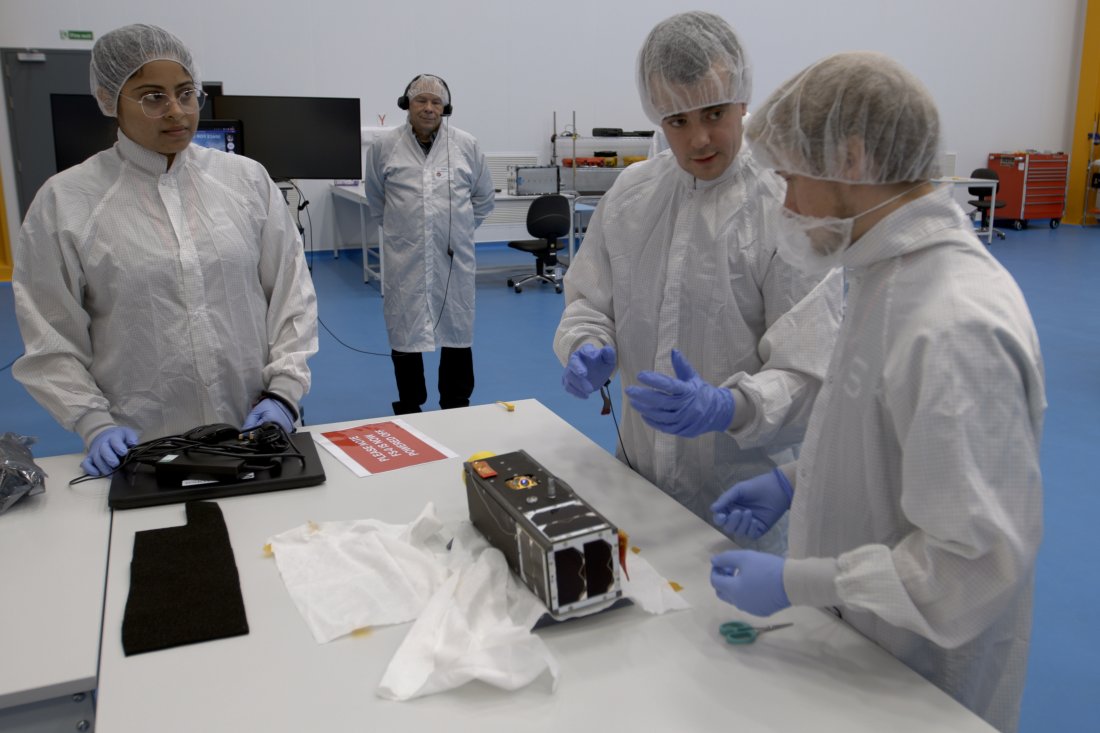 Joshua Western, CEO and Co-founder, Space Forge: “Integrating ForgeStar-0 into Virgin Orbit’s Launch System at Spaceport Cornwall was an incredible moment for the Space Forge team. Everyone has worked extremely hard to build this satellite in just five months – and we are going to be sending Wales’ first satellite into space. What’s brilliant is how this is just the start for us.”

Andrew Bacon, CTO and Co-founder, Space Forge: “ForgeStar-0 is the dress rehearsal for a new class of satellites that can both survive launch and re-entry without leaving any debris behind. This opens up new possibilities to the advanced materials community to make use of ultra-perfect conditions space provides to challenge the way some of our most polluting industries are run. I am brimming with pride for our team who stepped up to build this satellite in record time and we are eagerly awaiting the lessons that it can teach us about how our technology performs in space before our first fully functional space factory is launched next year.”

Welsh Economy Minister, Vaughan Gething said: “It’s very exciting to see the first ever made-in-Wales satellite preparing for launch. Space Forge is a shining example of the type of company we wish to attract and grow in Wales, and the Welsh Government is extremely proud to have supported them to reach this important milestone. I wish Space Forge the best of luck ahead of what will be a momentous occasion.”

Matt Archer, Director of Commercial Spaceflight at the UK Space Agency, said: “This is an exciting time as we look forward with confidence to the UK’s first ever satellite launch. We have seen Virgin Orbit’s rocket and carrier aircraft arrive safely at Spaceport Cornwall, and now Space Forge’s satellite has been integrated, ready to start its journey to space. It will be fantastic to see Wales’ first satellite in orbit.

“Space Forge is an innovative, fast-growing company harnessing the benefits of the space environment to create materials far superior to those we can produce on Earth, which can be used to speed up electric car charging or improve the lifetime of aircraft engines. This is a huge moment for Space Forge and I wish them all the best, along with Spaceport Cornwall and Virgin Orbit.”

Following this initial mission, Space Forge’s focus is producing materials and products which offer game-changing levels of performance and efficiency in power-hungry infrastructure and systems – reducing the environmental impact of production on earth to unlock new value and innovation.

Research suggests that manufacturing these materials in space could reduce CO2 emissions by 75% in high value infrastructure, from EV charging stations to cloud computing data centers.