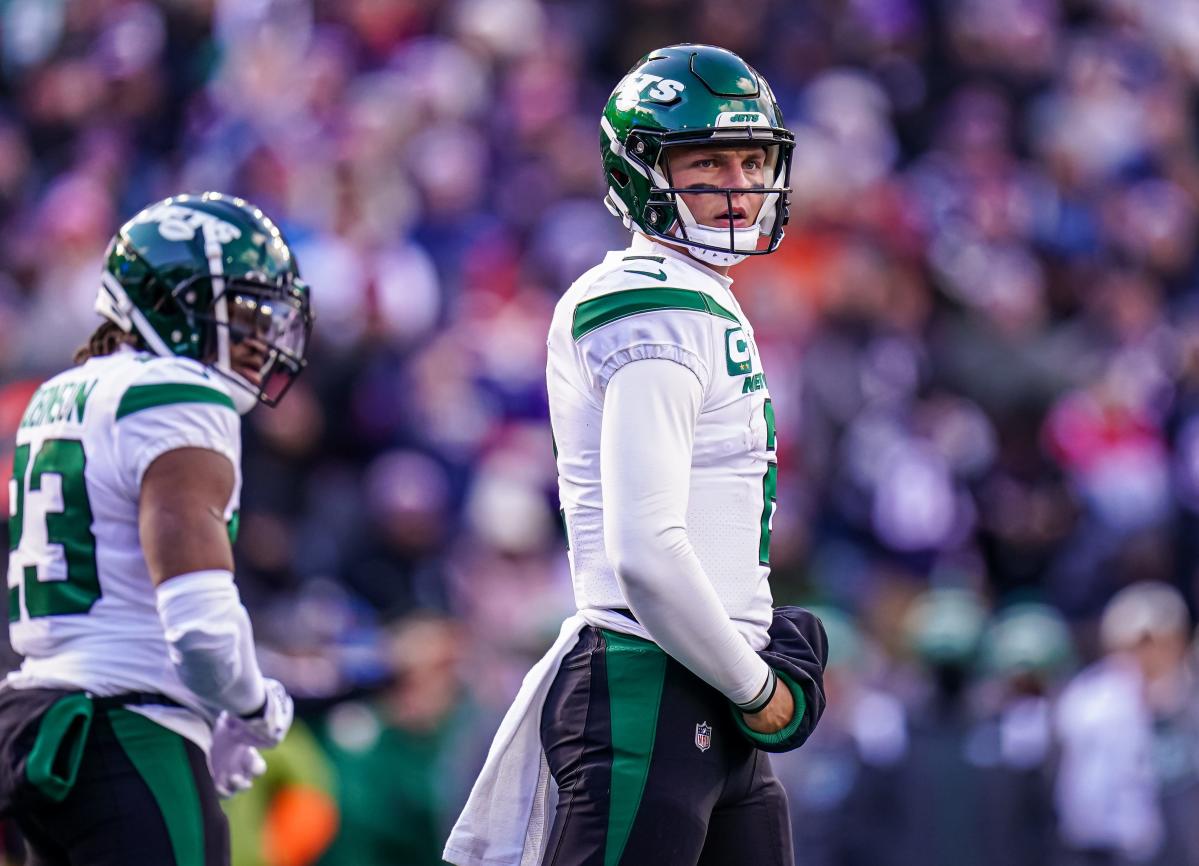 The New York Jets have spent the better part of five decades trying to replace Hall of Fame quarterback Joe Namath. The ongoing endeavor has met with varying degrees of success, although no one has been able to fill Joe Willie’s white cleats capably enough to lead the NYJ to their first championship – one famously guaranteed by Namath – since that seismic defeat of the Baltimore Colts in Super Bowl 3 to cap the 1968 season.

That brings us to the latest would-be gang leader in green, Zach Wilson. He hasn’t even completed two NFL seasons but is already strongly trending towards Wannabe Wilson and away from Broadway Zach.

The nadir may have come Sunday, when Wilson followed up a horrid performance on the field (9 of 22 passing for 77 yards, which doesn’t really do justice to his ineffectiveness) with a worse one at the podium – when he took little accountability for his poor outing, cited windy conditions that didn’t seem to bother New England Patriots counterpart and 2021 draftmate Mac Jones (a far less talented athlete than Wilson) all that much and didn’t take the opportunity to apologize to a dominant defense that was the only reason the Jets hung around before dropping a 10-3 contest to the Pats for New York’s 14th consecutive loss to their bitter AFC East “rivals.”

In fact, the Jets were swept (again) by New England this year even though the defense surrendered one touchdown in two games. That’s largely because Wilson was nearly as bad in Week 8 at the Meadowlands, serving up three mostly horrible interceptions (and 355 yards and two TDs, to be fair) in a 22-17 defeat.

Jets coach Robert Saleh had unfailingly stood by the No. 2 overall pick of the 2021 draft, even saying after Sunday’s debacle, “Zach’s our quarterback and we’re going to, we’ve got to find ways to help him get better” – that even though Saleh assessed the offense as “dog( expletive).”

“We’re keeping everything on the table,” he said Monday when addressing Wilson’s status as the starter.

“We have to look at what’s best for this organization and team.”

WEEK 12 POWER RANKINGS: How much does the Dallas Cowboys’ dominant win boost them?

Wilson must now grapple with those near-term consequences, which might include getting benched for former Super Bowl MVP (a decade ago) Joe Flacco or career backup Mike White for Sunday’s game against the Chicago Bears. Looking further out, the Jets might have to consider a veteran like Jimmy Garoppolo, who knows this coaching staff and offense, or Derek Carr or perhaps a compelling competitor for the QB1 job – maybe soon-to-be free agent Cooper Rush, who played so well for the Dallas Cowboys during Dak Prescott’s absence this season.

But as Wilson’s future becomes increasingly murky, the opportunity cost of drafting him second overall a year ago – when the franchise and GM Joe Douglas fell in love with the BYU product’s dazzling pro day and stellar showing while feasting on mid-tier FBS-level competition – comes back into focus. And, sure, this is partially an exercise in hindsight, but many (me among them) were on record prior to the 2021 draft suggesting the Jets should strongly consider other options … such as:

Trade for an established quarterback

Douglas, who replaced predecessor Mike Maccagnan after he was fired following the 2019 draft, has steadily improved the talent-bereft, overpaid roster he inherited. New York’s promising young core, bolstered by Douglas’ widely hailed 2022 draft haul, has blossomed sooner than expected – perhaps in spite of Wilson, who has a horrific 70.7 passer rating through 20 NFL starts.

And say what you want about Aaron Rodgers, Russell Wilson and Deshaun Watson – all established Pro Bowlers with their own unique baggage (an overly kind metaphor in Watson’s case) – but imagine how much batter a team that’s currently 6-4 would be with any of them under center. Rodgers’ issues with the Green Bay Packers didn’t come to light until hours before the 2021 draft… though maybe offering Wilson and a ton of draft compensation in the following weeks might have gotten AR12 to New York. And, yes, there would be personnel tradeoffs to bring a passer of that caliber in, but exchanging the No. 2 picks of a quarterback-rich draft would have offset a lot of that freight. Douglas could have pursued the other passers – including Matthew Stafford – following the 2020 season, and the Jets would very likely be much better settled under center today.

In 2018, the Jets appeared to luck out by getting Darnold with the No. 3 choices of the draft. He showed flashes of his estimable potential – and retained his college propensity for turning the ball over – while toiling with what was very likely the worst supporting cast in the league. Although he didn’t really get a fair shake – his tenure also hindered by nagging injuries, a bout with mono and coach Adam Gase’s cluelessness – one reason the franchise pivoted to Wilson was to restart the contractual clock at the quarterback position with Darnold’s pricey fifth – year option triggered in the spring of 2021.

But what might have Darnold become if he had Chase, the eventual 2021 Offensive Rookie of the Year widely regarded as perhaps the draft’s best overall and maybe safest prospect? Darnold never had that kind of downfield or run-and-catch threat to work with. A weapon of that magnitude and stability on the coaching staff could have made all the difference to a player Douglas liked so much, he vowed to Darnold’s parents that he’d safeguard him. Oops.

And while it must be conceded that Darnold’s early experiences in the league might have rendered him beyond reclamation by the time Saleh was hired in 2021, this much is sure: Darnold was always backed and respected by teammates and unfailingly shouldered blame for a team he was unfairly charged with carrying virtually by himself. Take note, Zach Wilson – you’re in a far more desirable situation.

A different version of the Chase argument, this one proposing that better protection of Darnold might have been what was needed to fully unlock his potential. Sewell was generally ranked as the best offensive lineman in 2021 and a better player than 2020 Jets first-round OT Mekhi Becton, who’s been limited to one game the past two seasons by injuries. Sewell could have had Darnold’s back while putting defenders on their backs in order to heat up the Jets’ running game – which might have been another nifty means to get Darnold going.

The 2021 draft was apparently flush with quarterback prospects, and Douglas had his pick of the litter with the exception of Clemson’s Trevor Lawrence – though maybe he would have been an option if the Jets were willing to pay whatever the Jacksonville Jaguars asked to flip the first. and second slots. (This almost certainly wouldn’t have been reasonable given the near-universal assessment of Lawrence as a generational prospect.)

Regardless, there would have been significant competition for New York’s No. 2 picks. Don’t forget that the San Francisco 49ers paid above market price to vault to the third spot, where they drafted Trey Lance right after Wilson came off the board.

A move down by the Jets might have not only accelerated their rebuild with a boosted stockpile of selections – Douglas was also able to get OL Alijah Vera-Tucker, one of the team’s best players, in Round 1 that year after robbing the Seattle Seahawks of their first-rounder for S Jamal Adams – but New York could have also enlisted another premium player, maybe even a better quarterback than Wilson seems to be, and/or capital to get a passer in the future. Among the feasible options by just dropping to the middle of the 2021 first round:

► Jones (15th pick of 2021 draft): Again, he doesn’t have Wilson’s arm (or legs). But he possesses championship pedigree steeped at Alabama, apparently a better understanding of the intangible aspects of being an NFL quarterback and did enough as a rookie in 2021 to help steer the Pats back to the playoffs – where they seem likely to wind up again this year .

► LT Rashawn Slater (13th pick of 2021 draft): Coming out of Northwestern, he generally didn’t carry Sewell’s pre-draft hype. But Slater, a Pro Bowler as a rookie while protecting Los Angeles Chargers QB Justin Herbert’s blind side, might prove to be the better pro. Much as he values ​​offensive linemen, Slater certainly would have been on Douglas’ radar.

► LB Micah Parsons (12th pick of 2021 draft): The Dallas Cowboys wisely snagged the Penn State defender. Yet if a league-wide mulligan was provided on the 2021 draft, Parsons might well be the No. 1 overall pick. If his versatility and pass-rush ability had been apparent when he emerged from State College, the Jets – whose starvation for a dominant sack man is nearly as pronounced as their quest for a franchise quarterback – might have seriously considered Parsons at No. 2 overall, even though in reality he was available 10 spots later.

It appears this will be the option not taken that could long haunt the Jets – and Niners, Atlanta Falcons, Detroit Lions, Carolina Panthers, Denver Broncos and any number of other teams that could have come up for Fields (as the Bears did).

Lawrence and Fields were similarly hyped entering college. Fields’ transfer to Ohio State from the University of Georgia probably cost him a bit of luster, but then he thoroughly outshined Lawrence in the 2021 College Football Playoff semifinals. It’s still a bit of a mystery why Fields’ pre-draft stock didn’t match Wilson’s. And yet his dual threat ability as a passer and bruising but explosive runner – which has been on full display this season – would have made him a perfectly justifiable selection for the Jets, who want to be a physical outfit, as the second pick of the draft.

Yet even then – and, again, hindsight must be acknowledged here – Douglas probably could have traded down and still gotten, for example, Parsons and Fields, who was eventually rescued when Chicago dealt up to snatch him at No. 11. However, it must also be granted that there was plenty of foresight in 2021, Fields getting the best of Lawrence on the field, leading Ohio State to the national championship game, all before a pro day in Columbus that was nearly as impressive as Wilson’s – less the throw in Provo that captured everyone’s imagination and generated ridiculous (and still unfounded) Wilson-to-Rodgers comparisons.

Back to the present … and an uncertain future.

As Falcons fans did in Week 11, Jets supporters are scheduled to get an up close and personal look at Fields this Sunday – assuming his injured left (non-throwing) shoulder allows him to play.

At this point, he may have a better chance of suiting up than Wilson, whose pride and inability to make a simple read or connect on an easy checkdown have him trending towards very doubtful.

This article originally appeared on USA TODAY: Zach Wilson pick by Jets a mistake? Five things they could have done