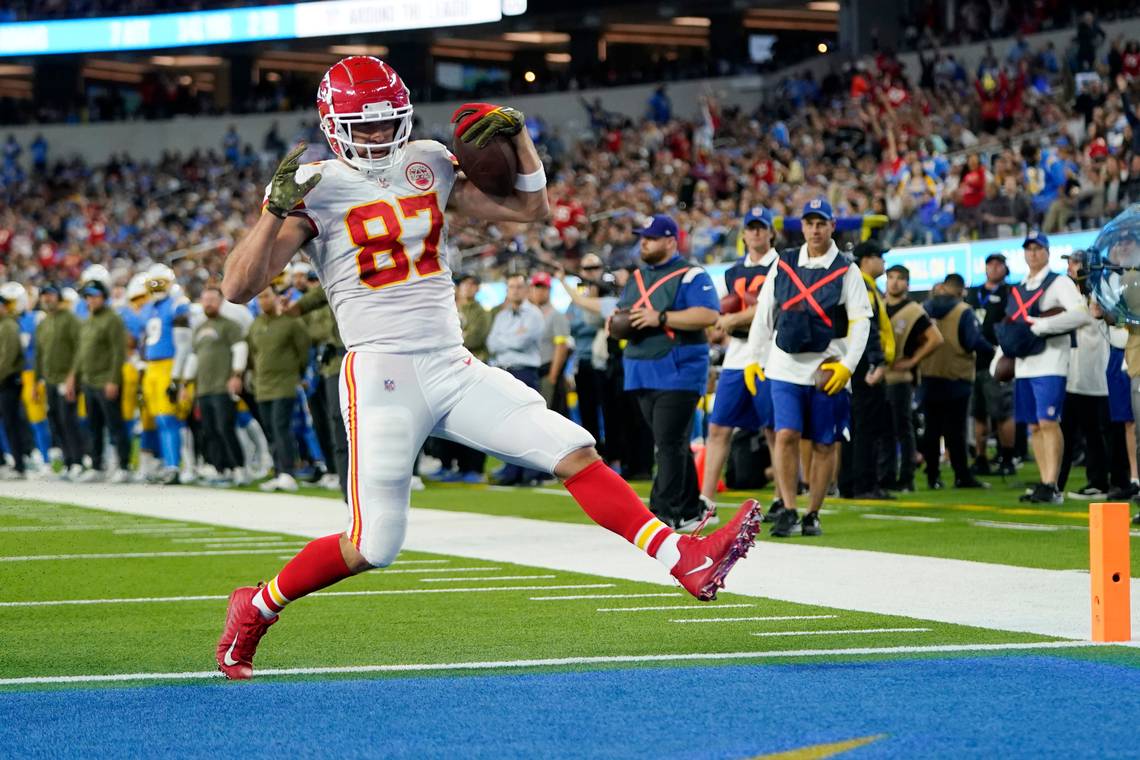 In two months, as we are analyzing the cemented MVP case of Chiefs quarterback Patrick Mahomes, we will point to Sunday night in Los Angeles.

Patrick Mahomes put together his second game-winning drive in three weeks, this one with a little more efficiency to lift the Chiefs to a thrilling 30-27 win against the Chargers.

He was nearly perfect on the game-winning drive.

With help from his most trusted option.

On a night in which the Chiefs turned to Justin Watson, Skyy Moore and Jody Fortson for a combined 180 yards, the quarterback ultimately turned to the connection he counts on the most.

That’s what leads the five observations from immediately after the game.

During a news conference this week, Patrick Mahomes quipped that there’s one way to get him out of his reading progressions.

If Travis Kelce is getting man coverage.

On a night of the aforementioned change, that remained the constant: Kelce tearing up man coverage.

Kelce beat safety Derwin James for a 17-yard touchdown with 31 seconds to play for the game-winning touchdown.

Which came only 14 minutes after the go-ahead score. Earlier in the quarter, Mahomes spotted cornerback Asante Samuel trailing Kelce on a drag route, put the ball on him, and Kelce took it 32 yards for a touchdown.

Kelce finished with six catches for 115 yards and three touchdowns. He has five touchdowns in his past two trips to SoFi Stadium.

2. How to replace the receivers? With tight ends, obviously

Playing without two key cogs at receiver, the Chiefs would like you to believe they simply favor the next-man-up approach.

They altered their scheme to include a heavy dose of tight ends, with Noah Gray and Jody Fortson implemented into the game plan. The Chiefs frequently used all three tight ends — Gray, Fortson and of course Travis Kelce — on the field simultaneously.

Patrick Mahomes’ best pass of the night fell into the arms of Fortson on an atypical Fortson wheel route for 40 yards. On the Chiefs’ first touchdown of the night, a 4-yard pass to Kelce, Gray and Fortson set the key blocks.

The Chiefs defense actually had a terrific second half.

Trailing by 3 late in the fourth quarter, the Chargers faced third-and-17 in their own territory, and offered plenty of time to stand in the pocket, Justin Herbert found Keenan Allen down the sideline for 46. It led to the Chargers’ go-ahead touchdown.

I’ll take a moment to question the coverage — or its execution. It’s difficult to know which.

But what we do know is it left rookie Joshua Williams on an island with a Pro Bowl receiver on a 3rd-and-17 snap. Another rookie, safety Bryan Cook, was late to offer help.

Whatever the reason — play call or execution — it’s a gaffe that prompted the Chargers’ only points of the second half.

The Chiefs special teams units have ranked in the top-four of Football Outsiders’ all-inclusive DVOA metric in five of the past six seasons.

Which leaves this year as the exception.

The unit has been rather un-special.

The frustration is a significant portion of the blunders are game-altering, and a handful of others are mental mistakes. It’s a trend, and an alarming one in tight games that can be swung easily.

This time, it was Isiah Pacheco fielding a kickoff just shy of the sideline, rather than catching it while standing out of bounds — which would have penalized the kicking team for a kick out of bounds. It’s a rule every kick returner has to make.

It’s one play. But in a long string of them this year. I don’t need to remind anyone of the Skyy Moore fumbled punt returns.

Putting all of the blame on coordinator Dave Toub is misguided, although it’s not as though he’s absolved of it completely. But the Chiefs elected to turnover their personnel on special teams this season, and there’s been a steep learning curve. That’s all involved.

5. The Chiefs are going to be tested

The back half of the Chiefs schedule is actually much easier than it appeared going into the season. The Rams (next week) aren’t playing like last year’s championship group. The bottom half of the division isn’t what some thought it might be. The Texans are the Texans.

But the Chiefs are going to be tested for another reason.

The Chiefs have been quite healthy overall this year, but that tide is changing. JuJu Smith-Schuster, Clyde Edwards-Helaire, Mecole Hardman, Kadarius Toney and Juan Thornhill are among those who did not finish the game in Los Angeles. (It won’t help alleviate NFL players’ concerns about the turf.)

There are more valuable players on this roster, to be sure, but that collection is enough to alter game plans — like it did Sunday.