It’s time for the last one Fantasy Trends and Hidden Gems of 2022. With the chaos of the holidays, we’re all losing brain cells. So let’s keep this short, sweet, and to the point. Our source of inspiration is the NHL schedule, starting with our usual: looking at players with the busiest weeks.

Lindholm’s seeing some time on PP1 over Charlie McAvoy as of late. If that’s going to continue moving forward, then Lindholm gained a lot of the fantasy value that he lost when the team’s No. 1 returned from injury. The best opportunity may be against the defenseman’s former team, Anaheim, on Sunday, given that they have one of the worst penalty kills in the league.

With an assist against the Senators, Gustafsson’s point streak extends six points. Over that stretch he has five goals and five assists, making him a hot hand worth considering. Those point contributions are coming both at even strength and on the top power play unit, where he’s filling in for the injured John Carlson.

A mix of scheduling and scoring has Schmaltz on our radar. We get it, he’s on the Coyotes. But he’s picking up points and shooting the puck pretty frequently, and there’s two prime opportunities to build on that next week: against the Flyers and Blackhawks, who are bottom-10 teams in expected goals against at five-on-five. If Carter Hart is still out by the time the Coyotes head to Philadelphia, Schmaltz is an even more intriguing option.

Parayko doesn’t scream fantasy hockey dynamo, we get it. But there’s always ways to find value. In his case, it’s not in one particular category but a couple of places he could contribute. There’s the shot, block, and hit columns — blocks especially against Minnesota twice next week and the Devils, and hits in those two divisional matchups versus the Wild. Plus, with Torey Krug sidelined, there’s a power play opportunity for the hard shooting defender. That could bring more offensive potential.

The good teammate effect is real, and that’s especially true when playing alongside one of the best offensive duos in Tavares and Marner. What else do we stress besides the good teammate effect? Flexibility and versatility, which Jarnkrok brings since he’s listed with all three forward positions. That allows managers to move him around their core, instead of trying to fit him in over their best players. 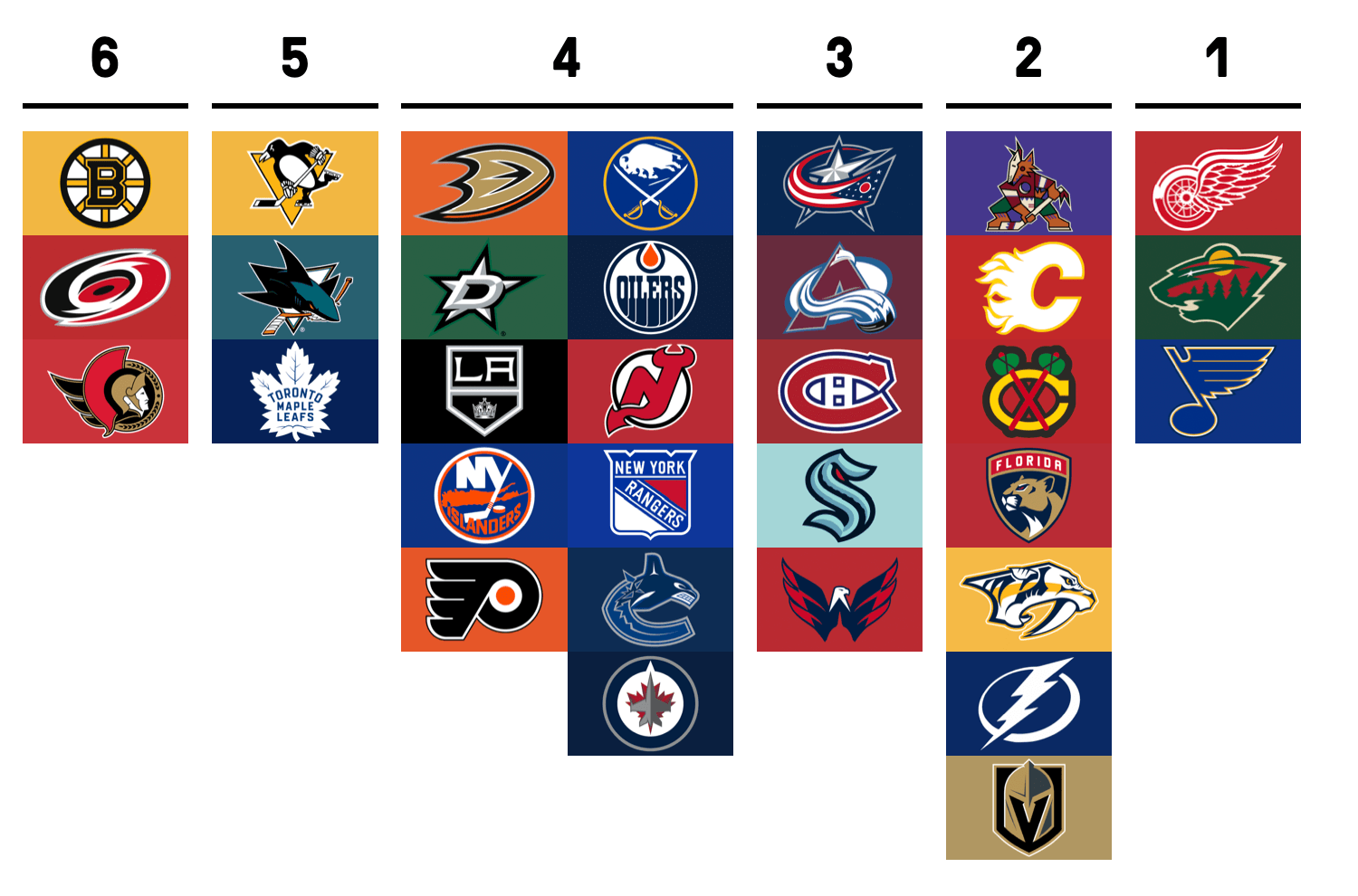 As promised, around the start of each month we’ll look at teams playing the most on light nights. We define those as days with five or fewer games, or less than one third of the league in action.

At the top, there’s the Bruins, Hurricanes and Senators with six games each. Boston’s light nights start on Monday with the Winter Classic. So if you’re thinking about Lindholm, that may be a good time to start considering how often he can be deployed in the coming days and weeks.

For the Hurricanes, keep your eye on the return of Max Pacioretty. While he’s probably going to be rusty and take some time to get acclimated to his new team, we expect him to grow into a top-six and power play threat.

Of the five gamers, we obviously suggest Jarnkrok. As long as the Maple Leafs rock a five-forward power play unit (and we question how long it’ll last with Morgan Rielly back), Michael Bunting’s on our radar since he can provide more offense than just even strength and PP2 can provide.

There’s even some interesting players to keep in mind who have four light nights coming up this month, like Ukko-Pekka Luukkonen in Buffalo. The goaltender’s playing well between the pipes and could be a good addition as soon as this weekend when the Sabers have back-to-back games.

Speaking of back-to-backs, that’s our next focus. Usually when a team plays in two straight nights, the No. 1 and backup each start a game. So, if you need a goalie, these are the teams to focus on. Now, not all of them are advisable — neither of the Blue Jackets’ goalies are right now, for example. So we’re going to lay out your options in the viz, then fill you in on who we suggest considering. 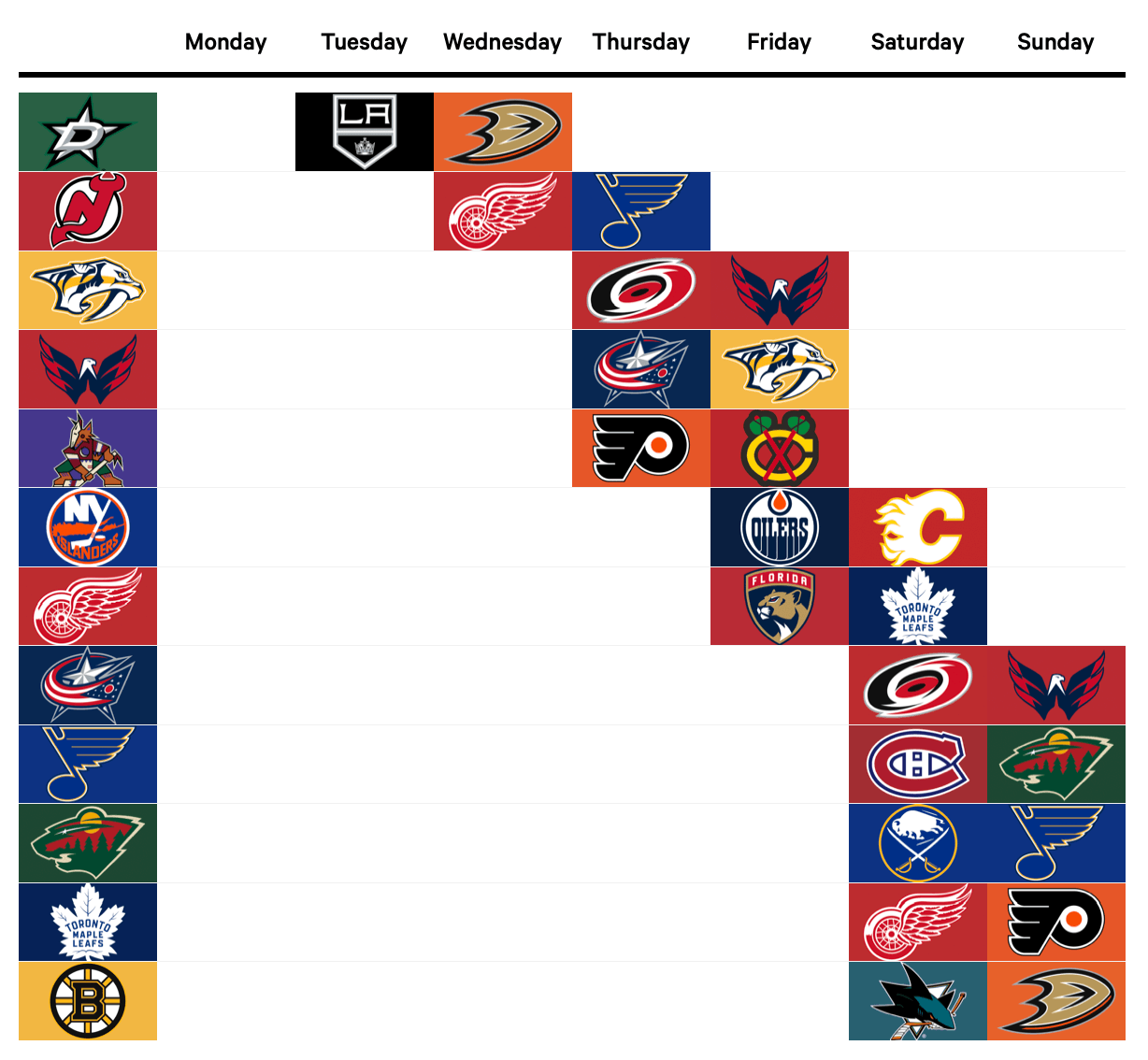 We know that Darcy Kuemper has returned to play and that’s diminished Lindgren’s workload after a very good December. But it’s worth noting that they play back-to-back against Columbus and Nashville on Thursday and Friday. That means Lindgren should get at least one start next week, if not more. Considering that neither of the teams in this set of back-to-backs are overwhelming offensively, we like his chances even more of putting together another quality start.

His last outing aside, Wedgewood has been serviceable as backup to Jake Oettinger. And he should get tapped to play against either the Kings or Ducks, the latter obviously being the easier workload for him to manage.

With games against Buffalo and St. Louis next weekend, we are positive that the Wild will turn to Gustavsson to start one game. There’s no way that Marc-Andre Fleury will start two straight games. The Wild’s backup has been playing well, putting up quality starts in four of his six outings in December.

Boston plays four times this week, including a back-to-back next weekend. So we fully expect starter Linus Ullmark to get some rest in between that. The perfect time is likely against the Sharks and Ducks next weekend, so why not turn to Swayman? He’s trending up with quality starts in each of his past three games, and shouldn’t be too challenged against these weaker squads.

The Maple Leafs goaltenders have performed better than expected this season, which is why their roster percentage is higher than the aforementioned backups. But if you can add one of them, next week is the perfect time considering their back-to-backs. The Red Wings game could be a surprisingly high scoring one, but the Flyers are a lot less interesting offensively.

Data via Evolving-Hockey, HockeyViz, AllThreeZones, HockeyStatCardsand NaturalStatTrick. This story relies on shot-based metrics; here is a primer on these numbers.