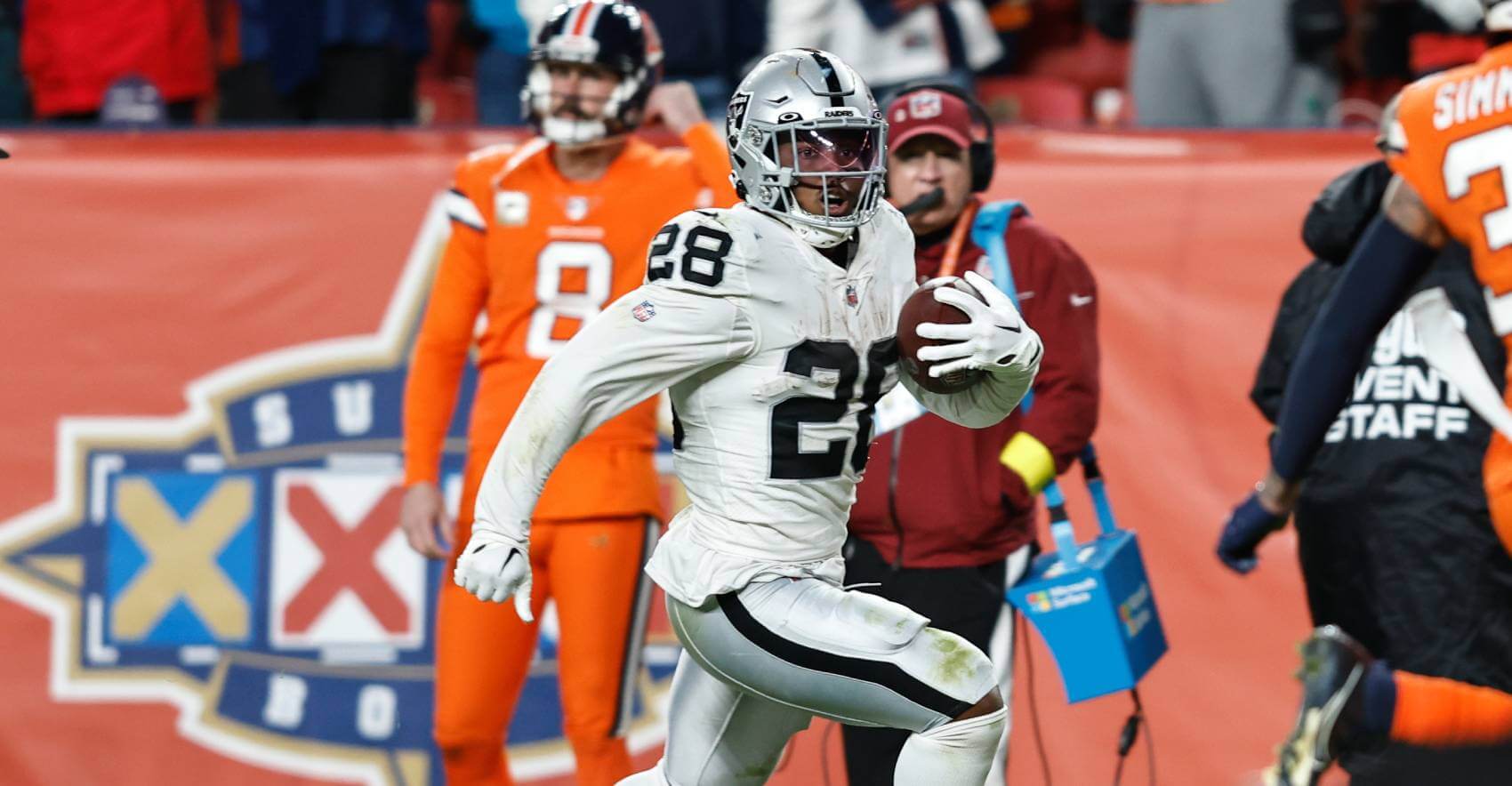 Welcome back to the Dynasty Report!

As always, I will be highlighting the most impactful storylines from a dynasty perspective. In addition, we will also take a look at the college football landscape in a segment called the Prospect Watch List. In short, you can expect the following segments every week:

To keep the dashboard concise, I will only be focusing on the most fantasy-relevant rookies at each position. For reference:

If you would like me to include other metrics or have any questions on the data below, let me know on Twitter @FF_MarvinE. Data courtesy of @nflfastR. 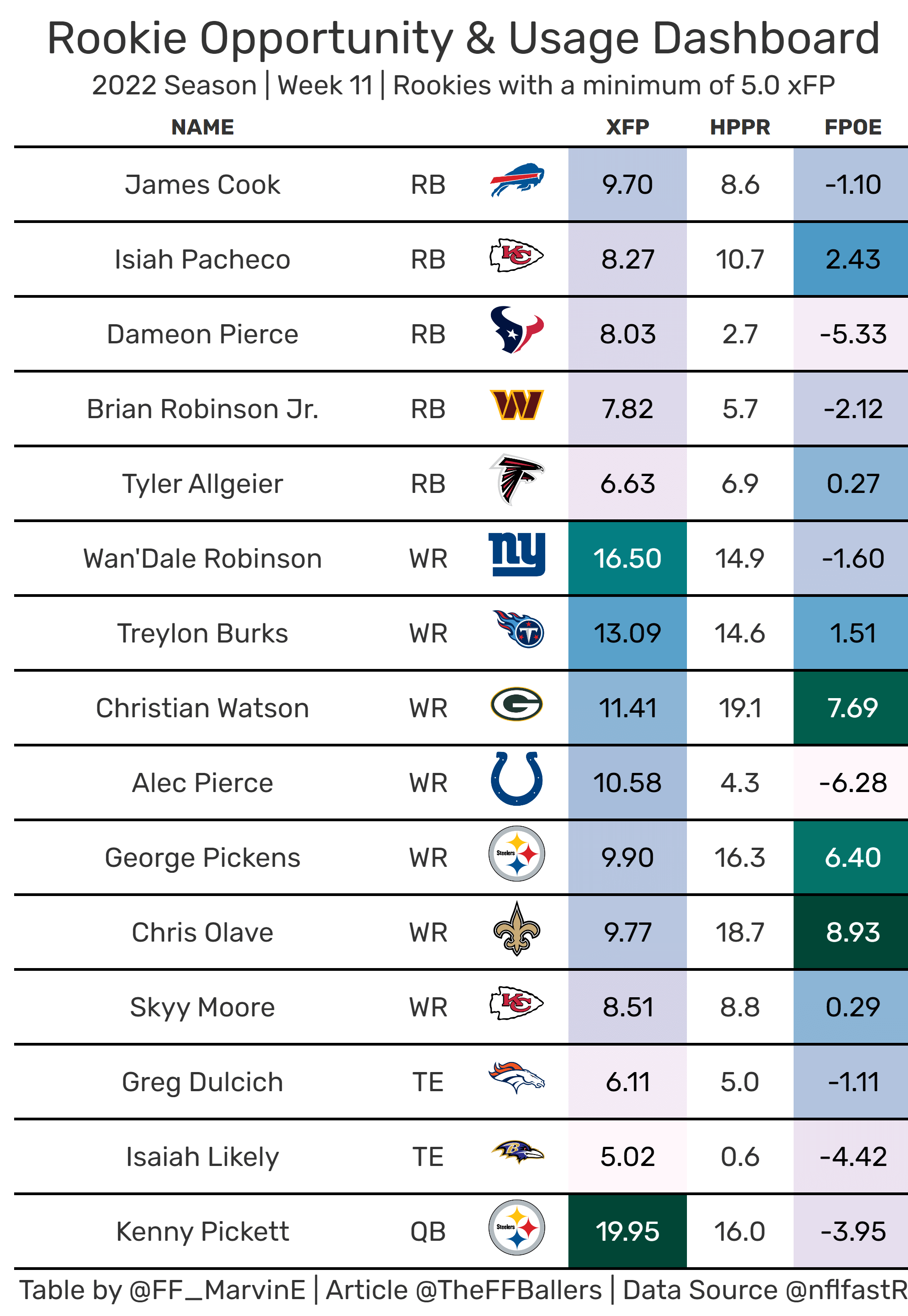 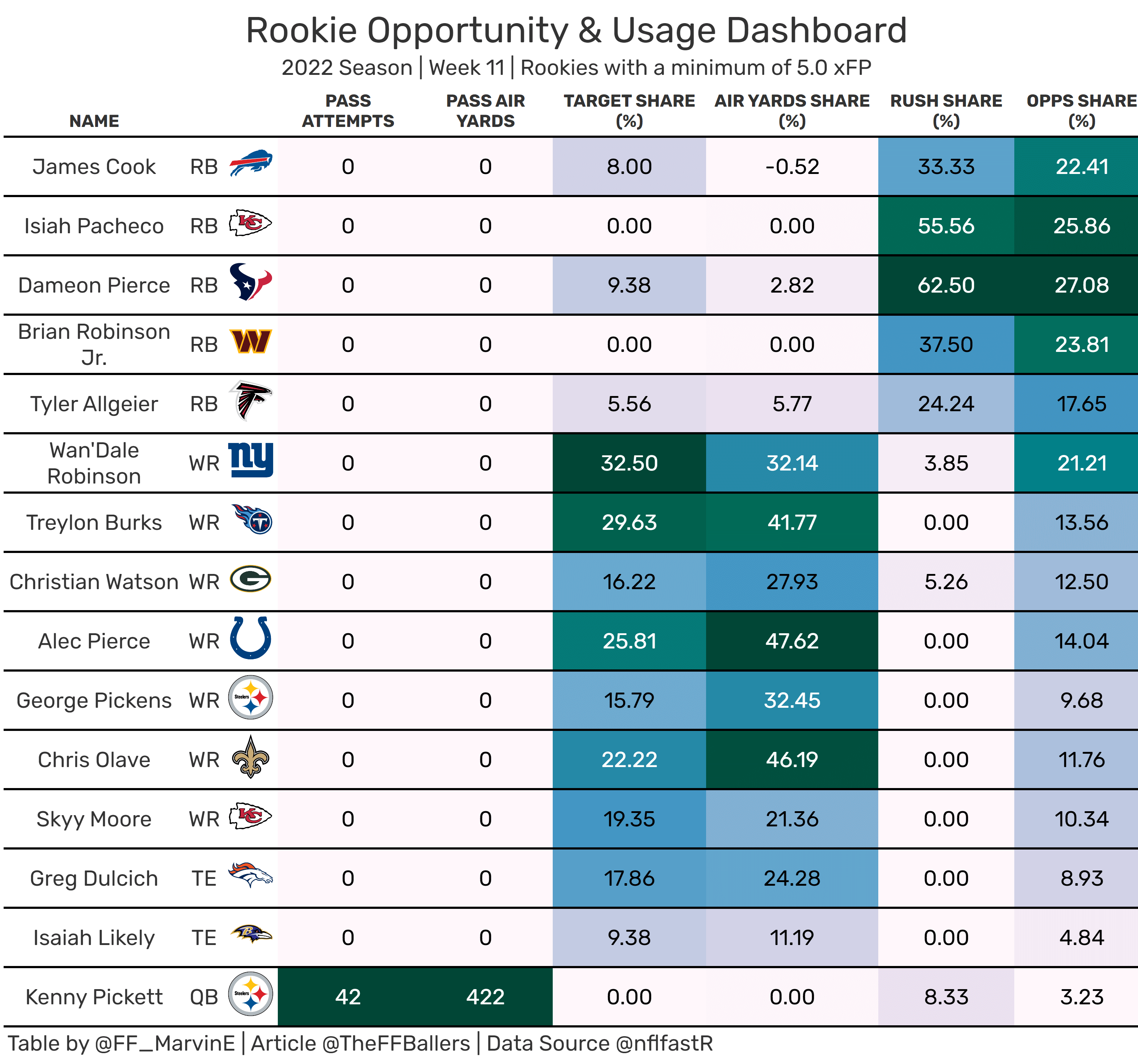 Remember when Zamir White and Ameer Abdullah were threats to Josh Jacobs’ workload?

Heading into Week 12, we can safely say that Jacobs has clearly operated as the unquestioned RB1 for Josh McDaniels’ offense. And while the Raiders have struggled to win games this season, Jacobs has been one of the most consistent offensive weapons for this team. Through 11 games, he ranks as the:

In other words, Jacobs has been an integral piece of the Raiders’ offense. Keep in mind, he is currently in a contract year after the Raiders declined his fifth-year option, creating some uncertainty for his dynasty outlook. However, based on his performance this season, there should be multiple teams willing to pay him a lucrative contract. Assuming a team does invest in Jacobs, I would not be surprised if he retains his RB1 role regardless of where he lands next year. As a result, he should be firmly entrenched as a top-15 dynasty running back as we approach the end of the season.

Entering this year, AJ Dillon‘s dynasty trajectory was on the rise as many expected the Packers to employ a more balanced backfield distribution. However, since his RB10 performance in Week 1, Dillon has only finished inside the top 24 once, failing to produce double-digit fantasy points in his last ten games. And with limited opportunities, Dillon is averaging a career-low 4.3 yards per touch. As a result, it should not come as a surprise that the Packers have leaned on Aaron Jones instead, who is currently the more dynamic option out of the backfield. Unfortunately, this means Dillon holds very little standalone value for fantasy managers.

This summer will be especially crucial as Jones’ cap hit increases to over $20 million according to Spotrac. Based on their cap situation heading into 2023, this likely means that they will need to restructure his deal to keep him around. If they are unable to come to an agreement, Jones could be released in an effort to improve their cap space, leaving Dillon with the opportunity to be the RB1 in the final year of his rookie deal. Therefore, if you are looking to acquire running back depth for next season, Dillon may be the ideal trade target considering his diminishing dynasty value.

Tony Pollard is the backup running back everyone wanted AJ Dillon to become.

Even before Ezekiel Elliott’s knee injury, Pollard was a starting flex option in most matchups. In the first seven weeks of the season, he finished inside the top 30 in five of his seven games, ranking as the RB35 in points per game. He was also averaging a higher target share (8.7%) than Zeke, which helped boost his weekly fantasy floor. However, it was not until Zeke suffered a knee injury that we finally saw Pollard fully unleashed. In his last three games, he elevated his performance to an elite level:

In short, Pollard has been one of the most efficient and explosive running backs since Week 8. Unfortunately for the Cowboys, he is set to enter free agency in 2023. And with Elliott’s massive cap hit, they are unlikely to retain both running backs. Whether he remains with Dallas or finds his way on a new team, Pollard has shown that he has the skill set to be a top option in an NFL offense, heavily boosting his dynasty value as we head into the 2023 off-season. 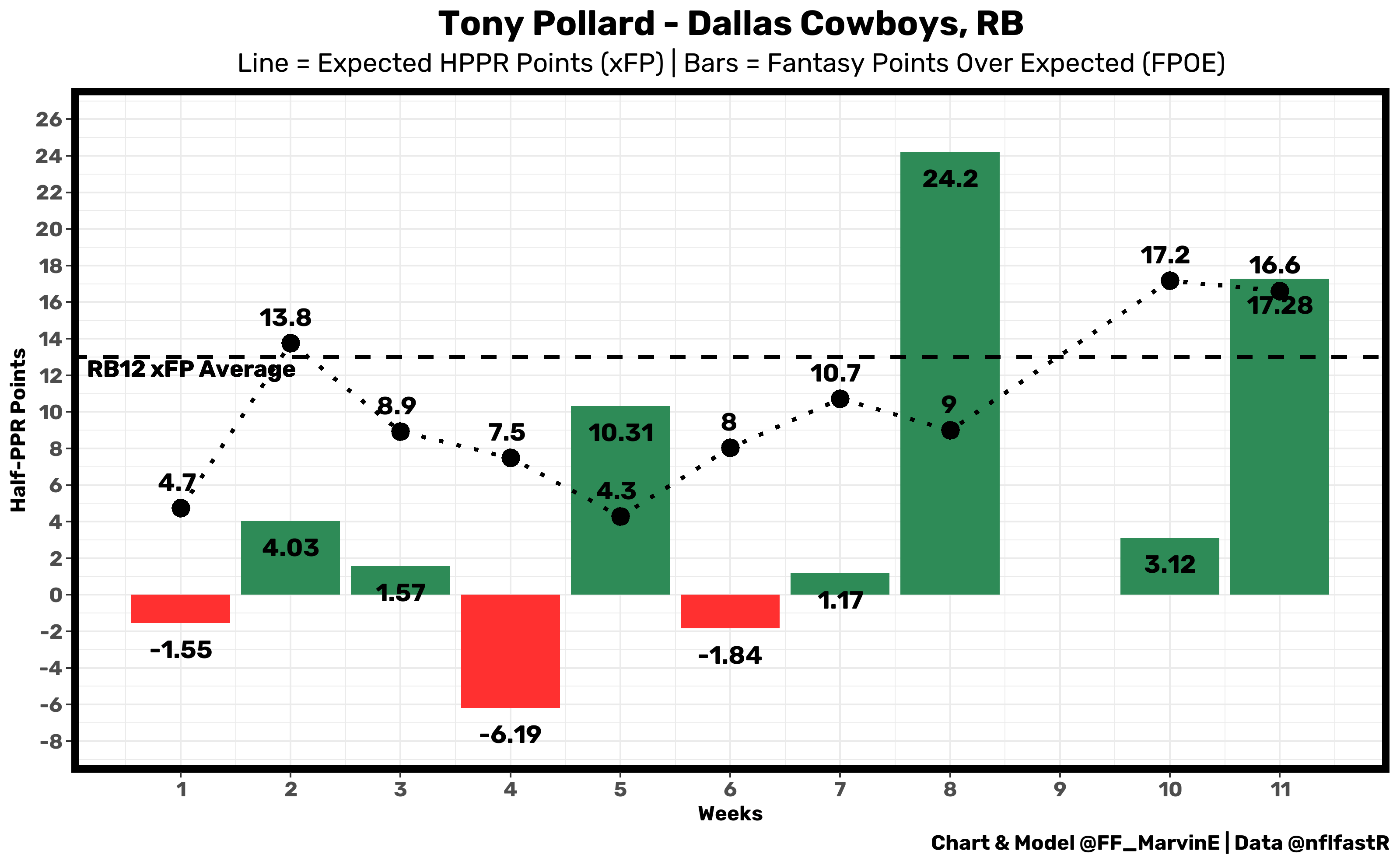 During the Cardinals’ Week 10 matchup, Zach Ertz suffered a knee injury that will sideline him for the rest of the year. It was an unfortunate end to his season after operating as one of Kyler Murray’s favorite targets and signing a new extension earlier this year. Through the first nine weeks of 2022, Ertz was averaging an impressive 19.5% target share and the 3rd-highest Expected Fantasy Points (10.3) among all tight ends. Considering his age, he was putting together an impressive season, finishing as a TE1 in seven of his nine games.

As for his dynasty outlook, Ertz’s contract extends through the 2024 season. And based on his projected dead cap in 2023, it is almost guaranteed that he remains with the Cardinals for at least another year. Whether he retains the starting tight end role remains to be seen as that will heavily depend on his injury recovery and how well Trey McBride performs the rest of the year. For now, his dynasty value will remain in flux until we gain more clarity on his injury in the off-season. 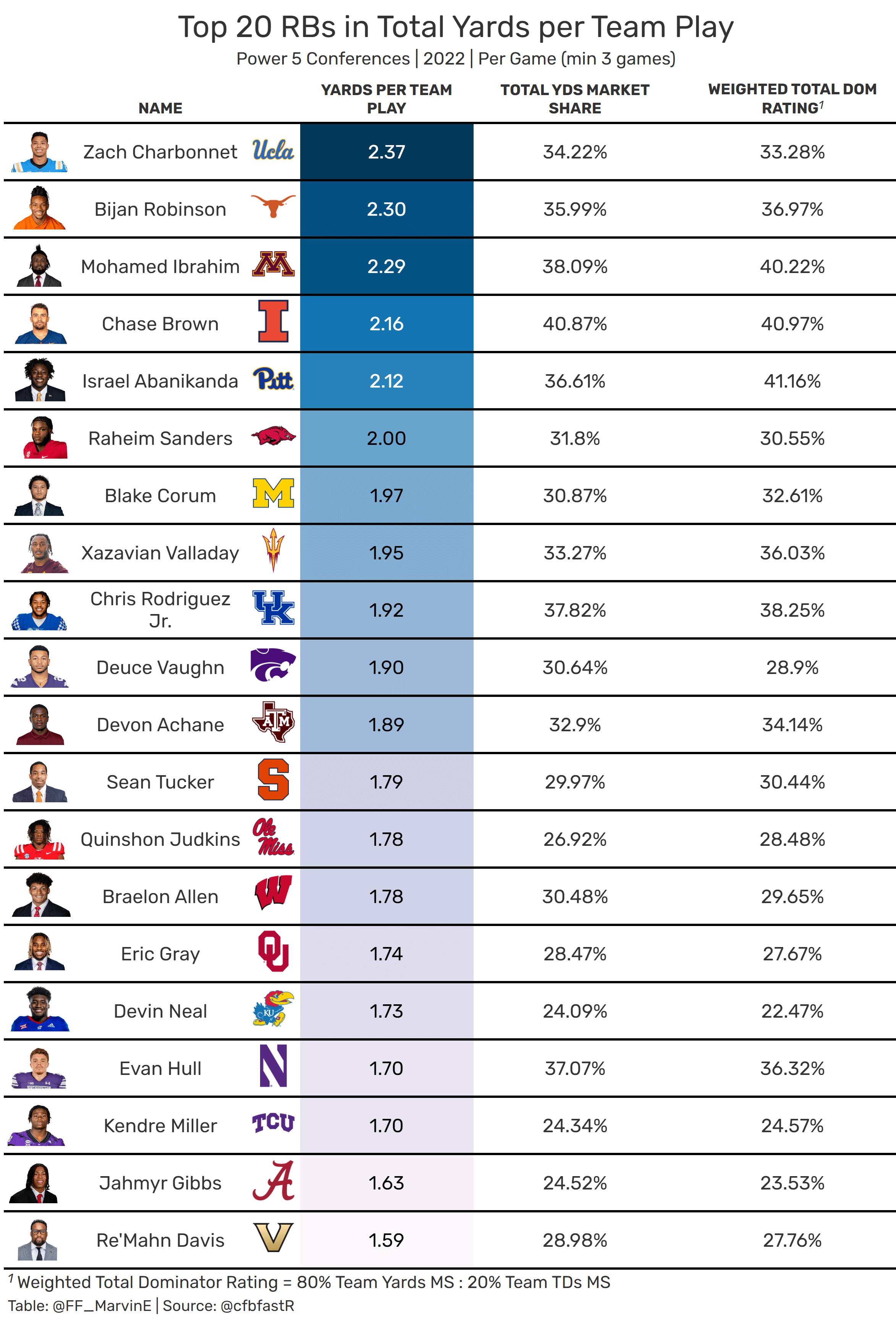 A couple of weeks ago, I highlighted the Ohio State wide receiver Emeka Egbuka, who is in the midst of an elite sophomore season. However, his teammate Marvin Harrison Jr. is arguably a more talented prospect and is projected by many to be the WR1 in the 2024 class.

Firstly, Harrison Jr.’s name should sound familiar as he is the son of hall-of-fame wide receiver Marvin Harrison, who played for the Indianapolis Colts for many seasons. While there was always hope he would develop into a top-tier receiver similar to his father, his true freshman season was mostly spent playing behind multiple first-round prospects in Chris Olave, Garrett Wilson, and Jaxon Smith-Njigba. As a result, he only accounted for 8.1% of the team’s receiving yards, with most of his production coming in the Rose Bowl (75 receiving yards and three touchdowns). Despite his quiet freshman season, it was always expected that Harrison Jr. would receive more opportunities in 2022 after both Olave and Wilson entered the NFL.

Needless to say, Harrison Jr. has seized the WR1 role for Ohio State this season and has been one of the most productive wide receivers in the nation. In 11 games, he totaled 1,037 receiving yards, 11 receiving touchdowns, and an impressive 32.2% weighted dominator rating. And as you can see in the table above, his 3.16 Receiving Yards per Team Pass Attempt (RYPTPA) is one of the highest in the nation. Keep in mind, anything above a 3.00 RYPTPA signals elite production; and the fact that Harrison Jr. is only a true sophomore makes it even more impressive. While we do have to wait until 2024 to draft him in our dynasty leagues, he is already shaping up to be one of the best wide receiver prospects in recent history. With the combination of his size, production, and athletic ability, Harrison Jr. will likely be the first wide receiver selected in the 2024 draft.