The UFC is going international, folks! Here we are, finally, in front of another numbered event put together by our beloved lad Dana White and now taking place on Singapore soil! It’s the first time since May 7 that we get an event out of Las Vegas and the UFC Apex – let alone a championship fight, I mean, TWO championship fights!

That’s right. Dana is paying us all back with a couple of bouts which will put a belt on the line, and that’s not everything he’s bringing to Singapore as the local folk of Kallang will also get to enjoy the return to the Octagon of Joanna and his ultimate foe Weili, who will go against each other for the second time in a rematch of the unforgettable 2020 bout that saw the former getting completely mauled (to the naked eye, at least) by the latter. And I haven’t even mentioned über-veteran Glover Teixeira defending his title nor unbeatable Valentina Shevchenko doing it for the nth time herself. Too much to unpack, oh lord, just bring it on!

In this article, I will be providing you with my fantasy MMA lineup picks for UFC 275: Teixeira vs. Prochazka on 06/11/22. Give me a follow on Twitter @chapulana. Good luck!

As crazy as it sounds, Prochazka signed his current deal with the UFC as recently as January 2020 and barely two years and a half later he’s already vying for the LHW title. Damn, son, talk about progress and seizing an opportunity. All Jiri did was defeat Volkan Oezdemir (2nd-Rd KO) and Dom Reyes (same outcome). Of course, Jiri arrived in the UFC with Rizin Champ accolades, mind you, and he was 26-3-1 prior to entering the Octagon for the first time having gone to a decision just once in his long MMA career.

Teixeira is pretty much the opposite and his status as the current champ tells you all you need to know about the division: it is in shambles. Teixeira faced Jon Jones trying to get the title from Bones all the way back in 2014 and never got another shot at the belt until Oct. 2021 when he took it from Jan Blachowicz. Glover is 42+ years old, into a six-fight winning streak, but far from a menacing fighter. He barely attempts strikes these days and his most honed skill is that of submitting foes (four of those six recent victories came that way). Jiri has a couple of KOs in the UFC and throws volume every time he steps into any sort of enclosed mat. Prochazka is the youngest man here, the freshest, and while Teixeira finally getting the gold was a nice ending for a long story, well, I guess the happy hour is over for the Brazilian.

I’m sorry but nobody is beating Valentina, let alone Taila Santos. With that out of the way, let’s dig a bit deeper into this one. Shevchenko is the reigning, undisputed champ of the division. She’s been involved in seven consecutive fights with a title on the line, and in eight in her last nine fights under the UFC banner going all the way back to 2017 which featured her lone loss in such an environment (against champ Amanda Nunes; UFC 215 ). Since then, Valentina is 8-0 with four KOs, one submission, and three decision victories in that span. She doesn’t need to go for an incredible amount of strikes, she has afforded herself the luxury of not chasing takedowns when she deemed them not needed, but she always finds a way towards coronation. That won’t change this weekend.

And that’s not meant to throw any shade at Taila Santos, far from it. Santos is as legit a contender as they get. Yes, she dropped her first fight in the UFC to Mara Romero. That, though, happened in Feb. 2019 and Santos is now boasting a four-fight winning streak that includes one submission win in her last fight last November. Santos is the only UFC fighter in the history of the promo to have a perfect takedown success rate while having attempted 8+ TDs career-wise (five fights, zero-for-zero in her last one). That is absolutely insane by itself. The fantasy appeal isn’t great, though, because the volume of strikes lacks a bit (Santos has yet to land more than 55 SSL in a single fight or attempt more than 100 SSA) and the takedowns always work but often no more than once per bout. Tough opponent but one Valentina should deal with for her nth successful defense of the gold.

This fight will leave all of us cold and let us all down as fans of the sport. It doesn’t matter what happens, it is absolutely impossible this bout will be better what we saw these two go against each other for the last time all the way back in the pre-pandemic March of 2020. I don’t think I need to remind you. Weili went for 8 takedowns but could only pull one of them off. Not that grappling mattered, I guess … That one was a striking fight, and Joanna’s face was the best proof of concept. Weili went 165-of-408 on SSL / SSA and Joanna put up a 186-of-360 mark. That’s bonkers.

Truth be told, both of these two are known for their heavy strike prowess more than anything else. Joanna has been out for three-plus calendar years but she’s decided to come back to face his demons in Weili. Weili faced Joanna and defended her belt successfully back then. She later dropped one via KO to Rose Namanujas in a hyper-quick 1:18 fight and could do nothing to stop her their second time facing each other last November. All of that after winning her first five bouts! This could definitely be a close one as the first one was, but it’s quite impossible it reaches those levels of magnificence. Weili should have enough for a bounceback and a better overall DKFP tally, but man, who knows with these two …

I guess it’s better to focus on recent performance alone and leave the long-gone past (mainly that of Rogerio Bontorin) out of the equation here. I’m saying that because Bontorin started 2-1 in the UFC in the year covering Feb. 2019 to Feb. 2020, but has gone 1-2 after that in three more fights including a KO defeat. Kape, in the same span, is 2-1 and has won his last two bouts via first-round KO while losing one via decision (his debut in the UFC, against Matheus Nicolau).

Bontorin is adept at chasing takedowns. He went for 10 in his first three fights landing three of those while he’s attempted 11 and landed 10 (91%) in his last three – he actually went 8-of-9 his last time out! Kape has yet to go for a single TD. That said, and even though he’s finished foes quickly as hell, Kape has shown a much better and higher striking volume than Bontorin on a per-minute basis as he’s never dropped from launching 6.1 SSA per minute compared to Bontorin, who has topped that mark just once in six UFC fights. Kape also lands more blows than Bontorin, which paired with the sky-high volume makes for a fantastic package. For fantasy purposes, and even if the fight goes the distance, Kape should be the better play given his underlying numbers and his approach to fighting. Bontorin has shown he has it in him to go for mental numbers on the takedown side of things, but it’d take another historic (8-of-9 TDs, remember) performance to outscore Kape in DK come Saturday.

You check Jack’s career – amateur and pro – and you can’t help but see the alternative future in which it turns out in the absolute opposite way. He went 2-0 as an amateur in 2015, lost no time at all and turned pro, fell to a putrid 0-2 record with a KO and a submission defeat in those first two fights … and it all could have ended right there in May 2016. But it didn’t. JDM rebounded in a furious way, went 11-0 from that moment on, and is entering the Octagon boasting an overall 11-2 record that includes 10 early finishes in his pro career (9 KOs, one sub) – and yes, that includes a first-rounder against Pete Rodriguez last January in his UFC debut. Uh, oh, the flex on his doubters.

Emeev has not been bad in the UFC either, not at all. He’s 5-2 since debuting back in 2017, he’s never been defeated twice in a row, and although he dropped his last fight (Oct. 2021) he’s been on the right side of things way more often than not. Emeev is a grappling artist and has landed at least one takedown in all but one of his seven fights in the UFC while always going for at least 3 TDs in each of those bouts. He attempts nearly nearly 8 TDs per fight while landing 2+ of them easily. The striking volume kills his upside, though, as he’s reached 101 SSA only once and topped at 53 SSL only in that fight. He’s gone to the judges’ decision all seven times. Even if JDM can’t finish Emeev and this thing goes the full 15-minute distance, odds are the former ends with a bulkier DKFP tally than the latter and avoids getting finished. That’s reason enough to go with the Australian. 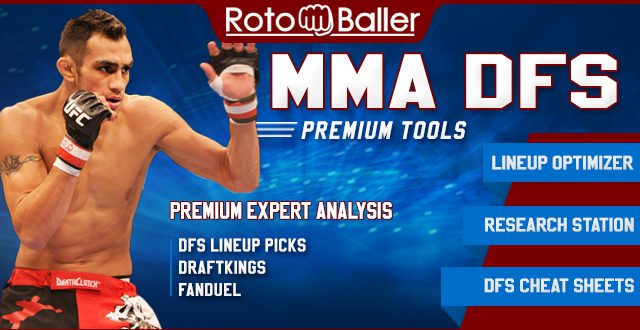