China’s aerospace companies took the leap to make great progress in satellite launch, with the country’s reusable sub-orbital space carrier made its first successful repeated-use experiment flight on Friday, which experts said has boosted the morale of private aerospace firms as the huge market. potential of over 100 billion yuan ($14.45 billion) in the country’s commercial aerospace sector gains pace.

As China’s commercial space sector has entered a fast-development track after several years of high-speed development, domestic investors are shifting their focus to the commercial satellite sector, with start-ups recently attracting more financing along with their robust growth.

On August 16, domestic satellite laser communication equipment developer HiStarlink announced that it has completed pre-A round of financing, only six months after its latest financing from angel investors, domestic tech news portal 36Kr reported. It said that the company’s pre-A+ round of financing is almost completed.

Closely following the announcement, on August 17, Beijing Star Space completed a pre-A round of financing of tens of millions of yuan, attracting investment from Puhua Capital and QF Capital, 36Kr said.

Private Chinese aerospace enterprises have made remarkable achievements to date, according to Huang Zhicheng, a Chinese expert on aerospace science and technology, noting that there are about 200 to 300 enterprises that focus on satellite manufacturing, rocket launching, and relevant downstream services based on orbiting satellite

Although most of China’s private aerospace companies were established after 2015, a short period compared with foreign competitors like SpaceX, they have been catching up rapidly over recent years in terms of technology, Huang said.

The launch marked the third consecutive successful launch of the Ceres-1 rockets. “It shows that Ceres-1 has become increasingly mature, taking the lead in a new stage of large-scale commercial launches,” the company said in a press release sent to the Global Times. 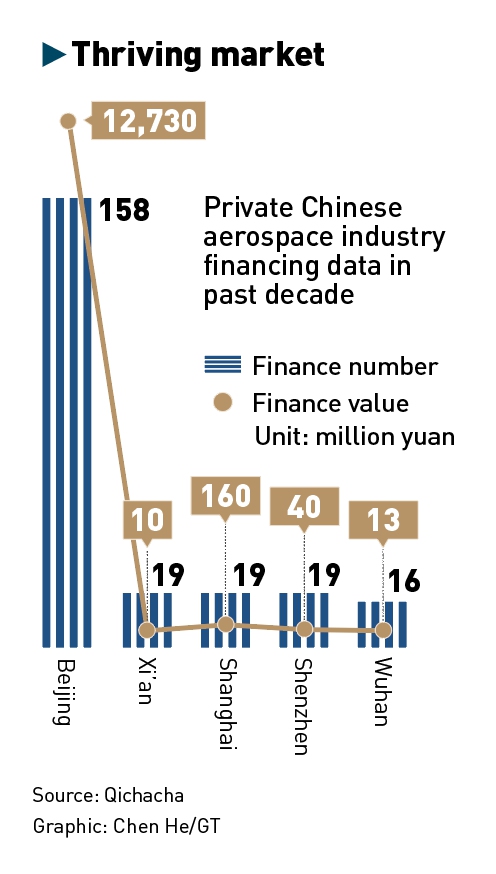 As an industry that relies heavily on policy support, the commercial aerospace sector in China entered fast lane after the country’s top economic planner added satellite internet to a list of new-type of infrastructure projects eligible to receive government support in April 2020.

A dozen cities across the country including Shanghai, Wuhan, the capital of Central China’s Hubei Province and Shenzhen, South China’s Guangdong Province are racing to develop their own local space economies.

Wuhan announced in March that the city supported leading firms in the aerospace industry to set up R&D center, manufacturing and assembly facilities in the city to accelerate the development of national aerospace industrial base. The city is offering companies up to 50 million yuan in incentives for each project related to the production of satellites, rockets and spacecraft, according to a government notice.

In addition, China will continue to boost public services linked to satellites and promote the application and transfer of space technology over the next five years by integrating with new-generation information technology such as big data and the Internet of Things, according to a white paper. released by the State Council Information Office in January.

On the back of favorable policies, space-related firms are mushrooming in China. According to domestic corporate portal Qichacha, there are over 95,000 space-related enterprises in China.

In terms of long-term development, it is crucial for the companies to enrich talent reserves, enhance their core technologies and keep improving the capacity of the rockets, including larger loading capacity and reusability, according to experts.

Compared with certain leading private aerospace enterprises such as SpaceX, most Chinese enterprises still lag behind in terms of research and development (R&D) investment, technologies and sheer scale, Huang told the Global Times on Monday.

In a highly competitive area, private satellite firms in the US are able to execute launch tasks for the US government. In this regard, private aerospace firms in China need to continue capacity building to compete with state-owned companies, according to Huang.

Although the current loading capacities of Chinese private-sector aerospace companies remain relatively small, there remains ample market demand for the industry, such as scientific and research institutions, colleges and commercial institutions that need to operate experimental platforms in orbital space, Wang said.

“In addition to higher loading capacities, domestic private aerospace firms need to enhance their technologies so as to cut costs for more opportunities from larger clients as well as government agencies,” he said.