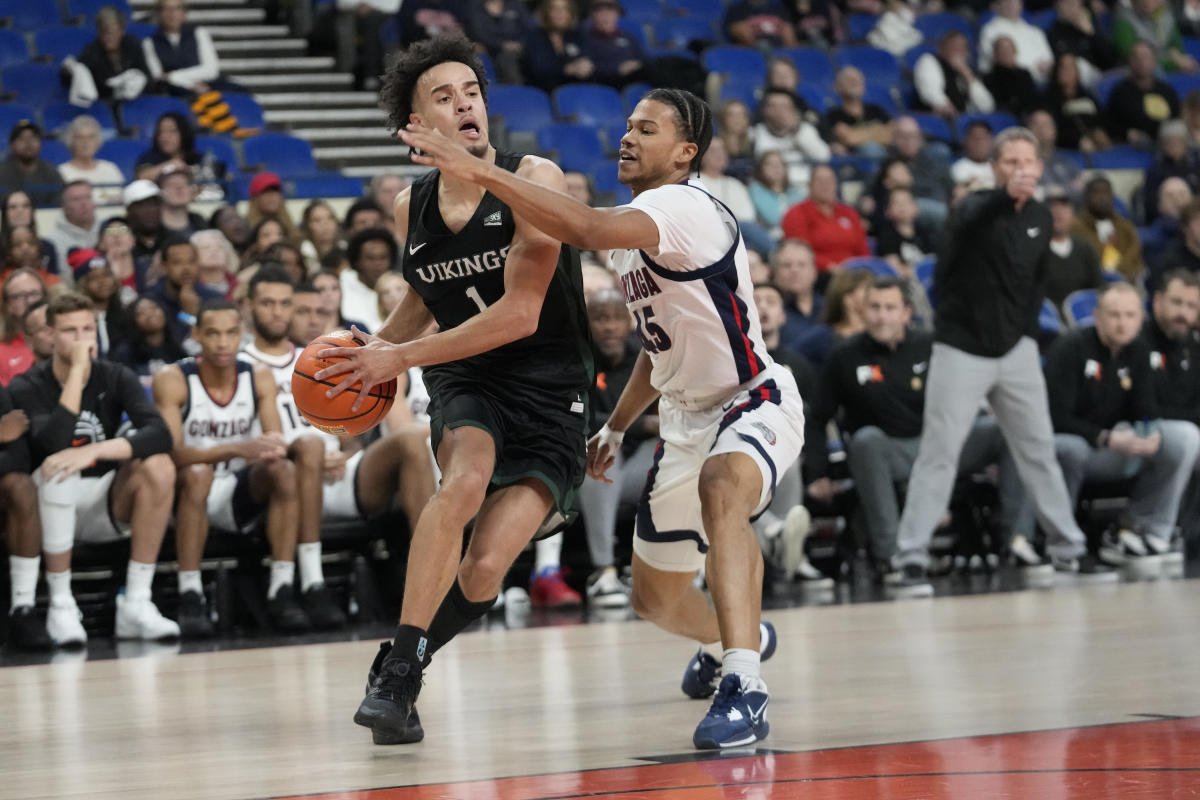 PORTLAND, Ore. (AP) Malachi Smith led six players in double figures with a season-high 23 points and No. 6 Gonzaga used a big first half to beat Portland State 102-78 on Thursday night in the opening round of the Phil Knight Legacy tournament.

The Bulldogs (4-1) led by 27 in the first half, held a 55-31 advantage at halftime and withstood a sloppy second half.

Gonzaga coach Mark Few said he had his players take note of games earlier in the day when Portland put a scare into No. 1 North Carolina and No. 8 Duke was nearly upset by Oregon State.

”There’s good teams out here if you’re not quite ready to go or at your best, you can get knocked off. I think that actually helped us firm up our approach,” Few said.

Smith was the Southern Conference player of the year last season at Chattanooga, but had yet to have a big scoring game with the Zags. That finally happened against the Vikings as Smith made 9 of 12 shots and all five of his 3-point attempts.

”I’m just trying to be ready whenever my number is called and what I’m asked to do,” Smith said.

Drew Timme scored 18 points and the only shot he missed was a dunk attempt midway through the second half. Rasir Bolton had 14 points and a career-high eight assists, while Julian Strawther, Anton Watson and Hunter Sallis all finished with 10. Gonzaga shot 60% for the game.

”That’s what makes this team special, we’ve got multiple players that can do multiple things,” Smith said.

Jorell Saterfield led Portland State (2-3) with 21 points and Cameron Parker added 16. Fresh off an unexpected win at Oregon State, the Vikings hung with the Zags for about 10 minutes before Gonzaga got rolling.

Portland State trailed just 18-16 after Isiah Kirby’s layup, but Gonzaga proceeded to score 32 of the next 41 points and it was a mix of all the key pieces contributing. Timme had a couple of baskets. Bolton had seven points. Smith hit a trio of 3s.

Gonzaga shot 66% in the first half, had three players in double figures before the break.

”They’re very good at exposing the defensive mistakes and that’s kind of what happened in the first half. … They went on their run and it was tough to recover for our guys,” Portland State coach Jace Coburn said.

But the second half performance was clearly not sitting well with Few, who was notably frustrated by some of the sloppiness. The Bulldogs still had the majority of their starters on the floor well into the second half. Portland State cut the deficit to 16 on a few occasions but could get no closer.

”We challenged our team and they responded and felt like we got after it the second half,” Coburn said.

Portland State: The Vikings went 1-2 in this tournament when it was played five years ago, putting a scare into Duke in the opening round and beating Stanford on the final day. These Vikings would gladly take a similar result this time around.

Gonzaga: The Bulldogs will have a major challenge in 7-foot-4 Purdue center Zach Edey in the semifinals. Timme likely won’t have it as easy as he did against Portland State, but he did have 22 points and seven rebounds in the win over Kentucky last week.

Gonzaga: Will face No. 24 Purdue in the semifinals Friday.