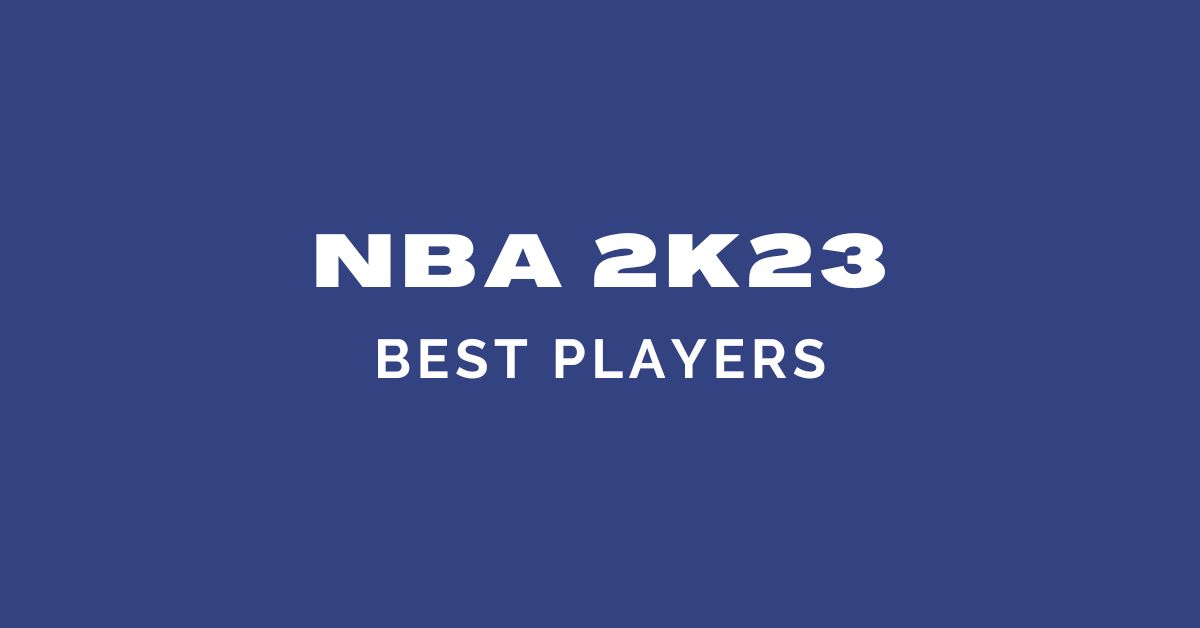 The best players in NBA 2K23 are undoubtedly the most fun to play with. Whether you’re playing against your friends or building a MyTeam, it’s essential to understand not only who the best players in the game are but also how to use them. Understanding what attributes are highlighted by each player will allow you to exert better control over the game.

In the modern NBA, most players display excellence in any of the four overarching skill sets: effortless shooting, superior finishing, all-around playmaking, and stifling defense. But when it comes to the best of the best, the players are often so talented that their skills overlap in multiple categories. That is what truly makes them great. Note that all player ratings are accurate as of November 20, 2022.

Standing at six-foot-three, Morant is the most electrifying player in the game, displaying shades of prime Derrick Rose and Russell Westbrook. More impressively, he has his team near the top of the Western Conference without a definitive secondary star. In just his fourth season, he’s averaging a career-high 28.6 points in his first 14 games. Shooting 39 percent from behind the arc now, he’s significantly improved his stroke, which was previously the only real knock on his game. His first step is incredibly difficult to contain, making Morant one of the easiest players to play with in 2K.

Since the release of 2K23, Tatum’s Overall rating has jumped from a 93 to a 95 due to his blistering start to the season. He is averaging a cool 30.3 points per game on 47 percent shooting along with nearly nine free throw attempts – which is his converting at an 87 percent clip – through 16 games. All of those are career highs for him. After his coming out party last year in the playoffs, he’s looking to establish his Boston Celtics as a perennial title contender and is receiving early MVP buzz. Tatum is a true 3-Level Scorer on the offensive end with a ranky wingspan that allows him to be one of the better wing defenders in the league. With his 2K attributes accurately reflecting the leap he took in his game, he’s the ultimate two-way player you can insert in any lineup.

Embiid’s 59-point, 11-rebound, eight-assist performance on November 13 was a reminder of just how dominant he can be. His Philadelphia 76ers have struggled out of the gate due in part to James Harden’s injury, but Embiid looks determined to put the team on his back. Through 12 games, he is putting up career highs in points per game and field goal percentage at 32.3 and 52.1, respectively. His array of post moves in 2K makes him a favorite for experienced players.

Like in most of his previous seasons, the back-to-back MVP has started out slow. As a result, his counting stats are not all that impressive compared to his peers. His 20.8 points per game in 13 appearances is his lowest average in the past three years. However, a slight reduction in his stats was expected with the return of Jamal Murray and Michael Porter Jr. The sacrifice in shot attempts has meant his field goal percentage has skyrocketed to 60.6 percent, and he owns the league’s third-best player efficiency rating as of November 21. His elite playmaking ability makes him a unique player in 2K.

Though Father Time seems to finally be taking its toll, James is still one of the most prolific drivers in the league. His ability to penetrate the defense and dish the rock to the open man is a skill that will never leave him no matter how old he gets. Especially in 2K, the grind of an 82-game season isn’t a factor when playing with James, making his abilities as an all-world finisher and facilitator even more valuable.

Amidst all the off-court issues he’s had to deal with, Durant is quietly putting together one of his best individual seasons to date. He’s averaging the most points per game since his 2013-14 MVP season at 30.4 and is hitting 53.1 percent of his shots through 17 games. Even in his age-34 season, he’s still chugging along as one of the greatest scorers to ever touch a basketball. His seven-foot frame makes him nearly unguardable in real life and in 2K. Look no further if you want to be able to get to the bucket at will.

At 33.5 points per game through 15 appearances, Dončić is averaging the most points in the league after a blistering start to the season where he scored at least 30 points in his first nine games. Unlike previous seasons where he started out slow, he has started the season already in mid-season form. After the loss of Jalen Brunson to free agency, Dončić has been carrying the Mavericks and producing wins without a real secondary playmaker. This makes for a 2K player who has the ability to wreak havoc in the paint and elevate the teammates around him.

Though the Warriors have gotten off to an uncharacteristically slow start, that hasn’t stopped Curry from putting forth a career-best 32.3 points per game through 16 contests while hitting 52.9 percent of his field goal attempts, 44.7 percent of his threes and 90.3 percent of his free throws. Mirroring his unanimous MVP season, the sharpshooter is on a tear right now. He is a one-of-a-kind player, making him a cheat code in 2K. His reputation as a shooter precedent him, and his 2K attributes speak for themselves.

Antetokounmpo is once again atop the MVP race due to his gaudy numbers and his Miluakee Bucks getting off to an 11-4 start without three-time All-Star Khris Middleton. Not only is he averaging 29.5 points through his first 12 games and is eighth in the league with a 26.7 player efficiency rating as of November 21, he is once again a contender for Defensive Player of the Year as well. The Greek Freak stuffs his 2K attribute ratings on both the offensive and defensive end, making him a nightmare to go up against.

Now that you know who the best players in 2K23 are and how to best utilize them, you can use them to take your team to the next level.