Thursday finished the regular-season series between the LA Clippers and the defending Eastern Conference champion Boston Celtics. After the Clippers beat the Celtics 113-93 in Los Angeles, the Celtics exacted revenge with a 116-110 win in Boston.

This matchup has had elevated intrigue over the years for a variety of reasons, from the teams’ deep-rooted connections to the similarities in roster construction. This year, both the Clippers and Celtics have championship aspirations that could see them meet for a third time five months from now in the NBA Finals.

The Athletic‘s Clippers beat writer Law Murray and Celtics beat writer Jared Weiss discuss what they’ve seen from these two teams together and what the future may hold.

Murray: The Celtics visit to LA 17 days ago was a big moment for the Clippers. It was the first time Kawhi Leonard and Paul George played a home game together since Nov. 19, 23 days prior when the Clippers hosted the Spurs. That Spurs game was so good offensively that Clippers head coach Tyronn Lue called it “The Blueprint” for how the team should play, but George did not play in that game after halftime, and Leonard injured his ankle in the following game.

As Celtics acting head coach Damon Stoudamire pointed out pregame in Boston on Thursday, the Clippers were the only team to outscore the Celtics in each quarter all season. The LA meeting was also Leonard’s breakout game, as he scored 25 points on 10-of-12 shooting and eclipsed 20 points for the first time this season. He’s done it twice more since leading into the rematch in Boston.

The George/Leonard matchup with Jayson Tatum and Jaylen Brown is the most intriguing part of these two teams playing each other, and it would headline a finals matchup. How do you see Tatum and Brown measuring up with the Clippers?

Weiss: The Clippers duo has been the road map for the Jays for so long, especially with so many similarities between them all. Tatum told The Athletic years ago that Leonard and George were the two contemporaries he studied to make the leap as a downhill scorer and playmaker. He took on a lot of George’s style and cadence when he first started to hit that star level, with long strides and a wide, jerky crossover.

But over the past two seasons, he’s become more powerful and subtle with his movement, maybe the closest facsimile in the league to Leonard’s X-ray vision game. Leonard just gets to his spot, no matter what, and shoots it. The defender can have a fingertip inches from his eye, and he doesn’t even feel it.

Tatum pretty much always gets to his spot and shoots like nobody is there. He no longer tries to find the wide-open shot but goes through everyone in front of him and shoots on his own timing. He’s found that if you don’t care what the defender has to say, you can do whatever you want. That’s the most Leonard thing about his game. He really is a special blend of Leonard’s and George’s playstyle, while Brown clearly has elements of their game in the way he hangs for midrangers like Leonard and gets into low, quick dribble spurts into spin moves like George.

Boston’s duo has a way to go in their playmaking to catch up to those guys, but their scoring ability appears to be on par, if not ahead. If the Clippers duo is still maintaining an edge, it’s really on the mental side. Stoudamire put it perfectly before the game Thursday, explaining how the Clippers have a clear identity that starts at the top.

“I liked the Clippers to like a ’90s team. They’re really methodical, they’re not trying to fool you on either end of the floor. If a player’s scoring they’re going to hit you, double-team,” Stoudamire said. “So I just think that with both of those guys you have to show a little bit of patience and just read the game. And that’s something that we’ve talked about especially coming into tonight. When (Brown and Tatum) tend to struggle, those are things that happen. But when our spacing is right, they always seem to make the right play.”

Murray: It’s interesting that you mention Tatum mirroring George’s style, as George has started these two games defending Tatum. And in this game in Boston, Tatum and George had a sequence in the second quarter where they were trading baskets. Tatum was able to keep that consistent through the quarter, though. Leonard and Brown each scored 15 first-half points in Boston, but Tatum outscored George 20-9, and that was the same halftime margin as well.

Weiss: Brown and Tatum were great inside the arc but dreadful from deep. The Clippers duo actually were better in the half court, but Brown especially was feasting on fast breaks. There was one play when George hit a layup and Al Horford immediately inbounded it to Brown, who sprinted coast-to-coast and finished through way too much traffic to justify the shot attempt. But he was determined to score, and he usually pulls it off when he does that on the break.

The Celtics haven’t been at full health a lot this month as a bug has swept through the locker room, and I wonder how this game would have looked with Malcolm Brogdon out there. Would that have opened up more half-court offense for Boston and widened the margin? Would it have taken away Boston’s incentive to run?

Murray: You saw how Payton Pritchard was in the first-half rotation, but those minutes didn’t go well, and Pritchard wasn’t seen again after halftime. That obviously isn’t something that would happen with Brogdon. The Clippers are actually healthier now than they were when the Celtics were in LA, with Norman Powell returning to health. The Celtics didn’t have Horford or Robert Williams III centers available, but they do now. How do those two change this matchup, Jared?

Weiss: The most obvious difference was that they were more aggressive blitzing Tatum and Brown, doing it often throughout the game and then going all-out pressure in crunchtime to spark a comeback. Stoudamire said they’re a ’90s team, and what’s more ’90s than full-court pressing like we’re in middle school?

It seemed like the intention behind the blitzing was to make sure the Jays couldn’t get downhill and lob it to the center in the dunker spot, since they know Williams can torch them with vertical spacing when Batum or Marcus Morris Sr. are at the five. But we did see plenty of blitzes with Ivica Zubac out there as well, so it was just a desire to get Tatum and Brown off the ball as much as possible in the half court.

Joe Mazzulla has always indicated there is no minutes restriction for Robert Williams, but Stoudamire said Thursday that they have “been given medically the minutes he should play.” There’s a whole semantics debate on whether that technically constitutes a minutes restriction if they go with the flow, but he clearly isn’t going to be playing 35 a night any time soon (or ever).

Williams’ answer summed it up perfectly.

That’s a big part of why Williams is still coming off the bench and Mazzulla has left his place in the rotation up in the air. There’s no clear answer for how to handle this situation on a team that has eight starting-caliber players, but Lue has plenty of practice with these kinds of difficult lineup choices. How has he been handling the league’s deepest roster so far?

Murray: It’s been a work in progress for Lue, and that fourth quarter in Boston was a sharp example. Batum is a switchable defender with smarts and length. He’s the team’s most reliable player in terms of availability, as he has played in every game. But Batum tweaked an ankle in the first quarter, and his rim protection was nonexistent in the second half.

Powell is the sixth nan, and he probably has the surest role: Put your head down and score, no matter who is on the floor. But if Powell is on the floor without Zubac or Batum, even if it’s with the other four starters, the interior defense is vulnerable. Boston scored 20 fourth-quarter points, a season-high for the Celtics and for a Clippers opponent this season. Brown had half of them.

So Lue can do a better job of utilizing his resources, especially against a team like Boston. Luke Kennard played 17:23 without attempting a shot, and the Celtics started targeting him late. Terance Mann didn’t play at all after halftime; he’s the type of player you wouldn’t target like Kennard was, especially with Kennard not getting shots up. John Wall played under control but was also being defended late by Robert Williams, and we saw Luke Kornet guarding him in LA

The Clippers have the means to adjust, and that would be helpful in a playoff setting. But we’re a long way from that, and the bench units have to actually make sense too, or you can forget the Clippers getting out of the West.

Weiss: There’s been a lot of questions about whether Williams should be coming off the bench, but he has been emphatic on saying he’s happy as long as the team is happy.

“If that happens, it happens. But we winners over here. We pride ourselves on putting team first,” Williams said. “I can impact off the bench. I like being able to see where I need to add the energy coming off of the bench. But like I said, it’s in the air, I’m gonna rock with these guys regardless.”

That’s a crucial position for a player who is much more than a role player to take, especially since the team was clicking when he was out there with the starters. It’s always a challenge to keep the top dogs happy, but they at least have free range to do as they please. Boston has carefully curated its roster to make sure the players on that second tier really are bought into sacrificing their role, which they need since there’s always going to be three starting-caliber players who have to watch crunchtime from the bench.

It’s why Boston’s rut, which really hit its drop-off against the Clippers the first time around, has reversed course. The overall defensive intensity fell off, but it’s back, and it’s setting the team up to create more easy buckets in transition throughout the night. Tatum and Brown have been going off as of late, but the team hasn’t been solely reliant on their brilliance. The cohesiveness of the offense seems to be back, and the defense has been holding up strong for a while now. 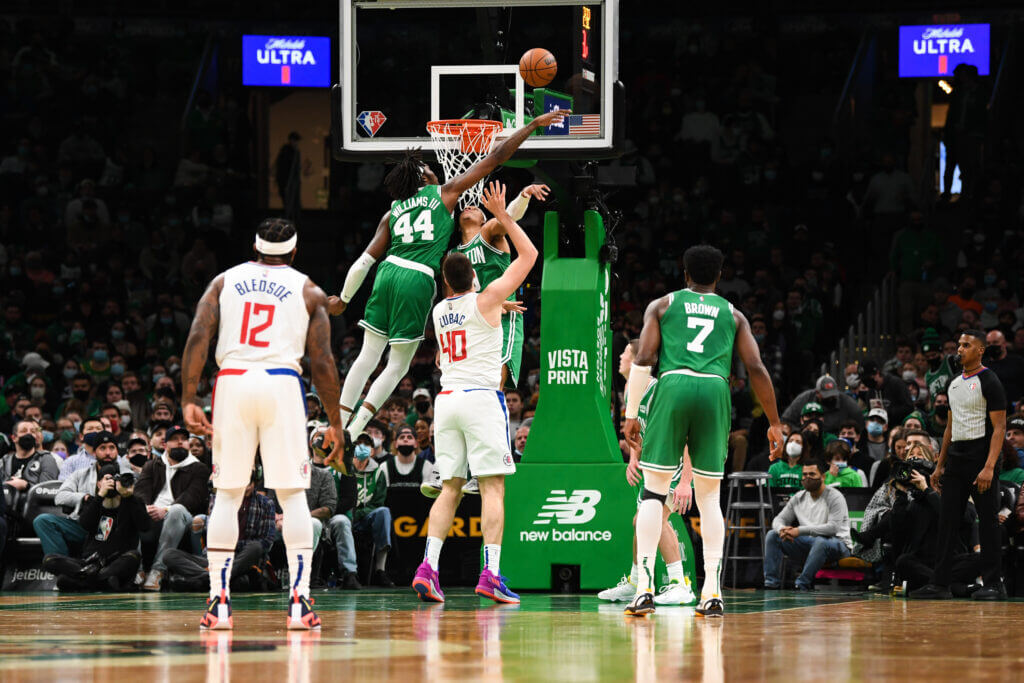 Murray: If these teams were to match up, it would definitely be a highlight for apex wing play. The Clippers are so much better when Leonard is on the floor, and he has the kind of game that would be challenging for the Celtics to deal with since he lives in the midrange. But both he and George are going to have to execute better against blitz defenses. Boston hasn’t forced many turnovers this season, but George (four) and Leonard (three) had seven of the 13 Clippers turnovers in Boston. George, in particular, is most prone to the kinds of turnovers that can flip momentum. When George’s turnovers are low and his field goal attempts are high, the Clippers are a better team.

It’s great that these two teams deliver memorable regular-season games. That’s been the case all four seasons that George and Leonard have been Clippers, though neither Clippers star played in the Celtics games last season and Boston has had four head coaches in this series somehow. An NBA Finals matchup would bring out the best in all four of Leonard, George, Tatum and Brown.