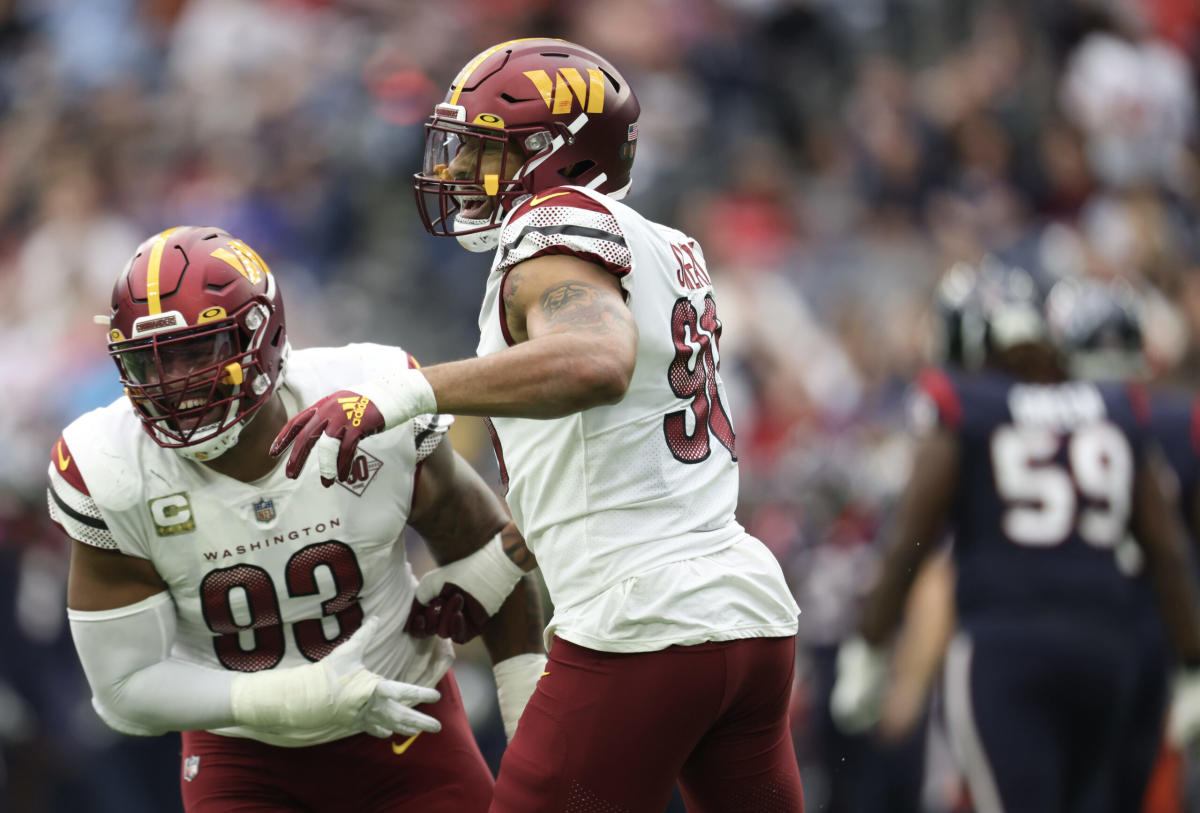 The Washington Commanders dominated the Houston Texans 23-10 Sunday to improve to 6-5 on the season.

The Commanders held the Texans to just five total yards in the first half. They sacked Houston quarterback Davis Mills five times, hit him nine times and intercepted him twice. Houston would end the day with only 148 total yards, and rookie running back Dameon Pierce, who came into the game among the NFL’s top rushers, finished with eight yards on 10 carries.

Quarterback Taylor Heinicke managed the game effectively; he wasn’t asked to do too much. The Commanders leaned on their defense and running game to leave Houston with a win. Washington’s coaching staff cautioned the team about this being a trap game and the players responded accordingly.

We do our best to name five players who stood out the most in Sunday’s win.

Antonio Gibson carried the ball 18 times for 72 yards and also caught three passes for 31 yards. He ran with power and speed. Gibson, a former college receiver, continues to improve as a running back. The Commanders lean heavily on Gibson each week, and sometimes he brings the big play, but he is often churning out the tough yards. Gibson rounds the corner, drops his shoulder and plows through the defender. He keeps getting better.

The most positive aspect from an offensive perspective of Sunday’s game was the re-emergence of tight end Logan Thomas. Thomas has had a tough year. He tore his ACL last December but was healthy enough to be activated in training camp. However, he also battled a calf injury and has never looked quite right. That changed Sunday. Thomas was getting open and moving well after the catch. The Commanders have missed Thomas’ offensive production, so if this is a sign of things to come, that is good news for Heinicke and offensive coordinator Scott Turner.

How do you even pick one guy from Washington’s defensive line? It all starts with defensive tackle Jonathan Allen — he sets the tone. Allen had three tackles, including three for loss, two sacks and four quarterback hits. Check out this play of Allen manhandling a first-round pick.

He does this every week. All-Pros, first-round picks, Pro Bowlers, it doesn’t matter. Allen dominates them.

Washington defensive coordinator Jack Del Rio always said the sacks will come for Montez Sweat. After Sunday, Sweat is up to six sacks. He had two more sacks against the Texans and was after Mills all day. Del Rio has talked about how Sweat is playing the run from the edge at an elite level. He’s right. He is also having a breakout year as a pass rusher. Sweat has come close on several more sacks. The pressure is there.

Darrick Forrest #22 of the Washington Commanders celebrates an interception in the fourth quarter of a game against the Houston Texans at NRG Stadium on November 20, 2022 in Houston, Texas. (Photo by Bob Levey/Getty Images)

Much like the defensive line, how do you pick one player? Well, we’re not here. Kendall Fuller had the pick-six, but he was terrific the rest of the game. Cornerback Benjamin St-Juste brilliantly defended Brandin Cooks on a deep ball that he deflected. On that same play, safety Darrick Forrest came flying onto the scene and made an incredible diving interception. Safety Kam Curl led the Commanders with seven tackles. What a day for this group.